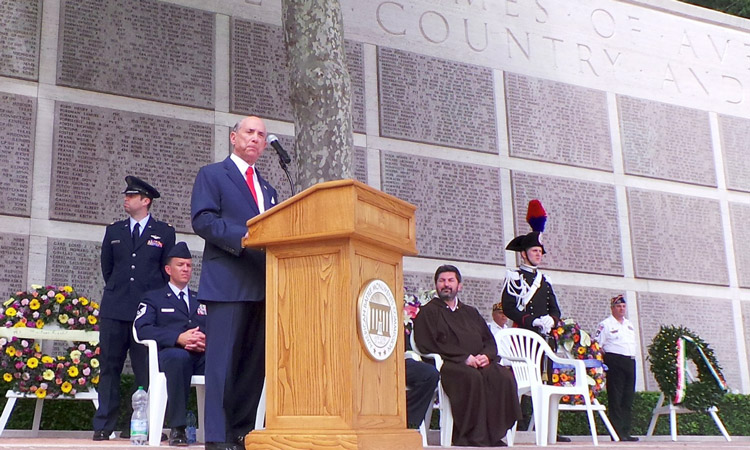 General Gronski, distinguished guests, veterans, ladies and gentlemen, it is an honor for me to be here with you on this important occasion. I thank you very much for commemorating with us the fallen servicemen and women who rest in this beautiful, tranquil, and serene cemetery.

On Memorial Day around the world, and in towns and cities at home, Americans and their friends and allies join together to stand silently at the final resting places of our countrymen and women who heeded the call to arms and gave their lives during wartime. Just as we have come here this morning, thousands have gathered across Europe this weekend at similar cemeteries: at Nettuno, Flanders, Belleau Wood, and in Normandy. In those places made sacred by sacrifice, many people will struggle, as I do this morning, to put into words the profound gratitude we feel for what their sacrifice has given to all of us.

Take a moment to gaze around at the 4,399 perfectly manicured plots and quiet stones. Each one is an everlasting tribute to the US Fifth Army’s finest, and the many others who rendered to their Nation their last full measure of patriotic devotion.

Each represents a victim of the carnage and brutality of a war fought to liberate Italy and Europe. Each represents a story: a hometown, a family, friends thousands of miles away. Those buried here came from forty-eight states and most were very young at the time of their violent deaths. Italians and Americans alike are humbled by their sacrifice and accomplishments.

Thousands rest here and the 1,409 names on the Tablets of the Missing behind me remind us of those who have not yet been laid to rest. There are three Medal of Honor recipients memorialized here, whose stories I will recount. Sergeant Roy Harmon from California gave his life near Casaglia in the Province of Pisa, saving his platoon by single-handedly engaging three different Nazi positions. Staff Sergeant George Keathely, from Texas, took command of two platoons to prevent their annihilation during an enemy counterattack on Mount Altuzzo. Lieutenant Colonel Addison Baker from Illinois, my home state, commander of a heavy bombardment group, refused to break flight formation after his aircraft was heavily damaged during a mission. He continued to carry out his mission until his aircraft went down in flames.

All of these soldiers faced their final moments far from home. All of them sacrificed everything on behalf of their Nation and for the freedom of Italy. While we are here to show our respect for the American war dead from World War 2, I would be remiss if I did not recall that these brave American men and women fought and died side by side with Italian men and women. This shared experience, sad as it was, helped forge the strong bond between our nations that endures today. As we stand here today, once more, Americans and Italians are fighting shoulder to shoulder against tyranny and oppression in areas of conflict around the world. We have no
greater friend and ally than Italy.

Every year that we gather here in Florence, there are fewer and fewer who were actually here in 1944 and 1945. Fewer and fewer who remember the faces of the men and women who lie here, or remember firsthand their deeds. The responsibility lies with us, therefore, to ensure that current and future generations never forget that we live in a Europe that is peaceful and prosperous in no small part because of what these brave men and women sacrificed alongside their Italian counterparts.

To any veterans with us here today, I would like to say that, thanks to you, our children and their descendants whom you see among us, have grown up in a Europe far removed from the tragedies of war and the terrors of despotism. Thanks to you, they have lived in peace with only days like today to remind them – and all of us – of the terrible price that sometimes must be paid for freedom.