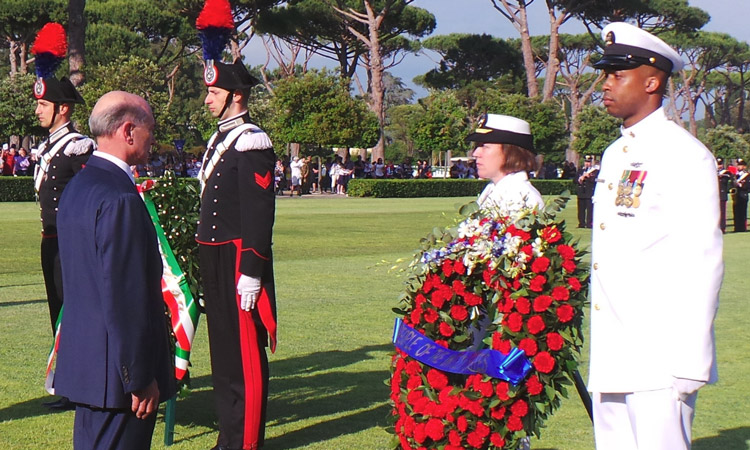 Welcome to today’s ceremony and thank you for honoring the service members who rest here in peace. I am deeply humbled to be standing with you this evening as we pay tribute to these brave men and women who made the ultimate sacrifice in defense of freedom.

I would like to thank the cemetery Superintendent, Melanie Reston, for maintaining this solemn landmark and organizing this moving ceremony. I would also like to extend my appreciation for the Italian and American military forces participating in tonight’s ceremony. Your professionalism in honor of these fallen heroes does not go unnoticed. Thank you for making this event special.

Americans have set aside Memorial Day to honor our war dead. It is a sacred tradition and a solemn occasion that we feel privileged to observe. The idea for Memorial Day began after the carnage and destruction suffered during the American civil war some 150 years ago.

The notion of “honoring” the war dead was a realization by the thousands of families who had lost loved ones during this turbulent time in our nation’s history that we reflect on the sanctity of life, and that those who gave the ultimate sacrifice shall never be forgotten.

We stand respectfully here tonight to honor the sacrifices of these beloved American souls who selflessly gave their lives for the cause of freedom. 75 years ago, the United States and its Allies embarked on bold mission on the island of Sicily and on the beaches of Salerno to defeat and eradicate tyranny. Many of America’s best never returned from that mission to the places they called home.

Nearly 8,000 Americans lay here eternally. Another 3,000 are buried at sea or missing in action. Most of them fought during the liberation of Sicily, in the beach landings at Salerno and Anzio, and the heavy fighting that took place northward. In November of last year, I made my first trip to this cemetery to attend a mass delivered by Pope Francis.

I shall never forget how I felt upon entering these sacred grounds and seeing the white tombstones meticulously placed throughout this resting place. Each and every one of these stones represents an American story: A dedicated father, a loving husband, a beloved uncle, or an only son. 16 American women lie in peace here as do 30 sets of blood brothers, including 3 sets of twins.

I feel particularly connected to American heroism and sacrifice during this particular campaign: Out of the devastation and horror of the Second World War arose a new transatlantic partnership anchored in shared values and institutions that has brought about an unprecedented period of peace and stability.

This year will mark the 70 th anniversary of the Marshall Plan. Together, we rebuilt Western Europe after World War II. In Secretary Marshall’s words, “our policy is directed not against any country or doctrine, but against
hunger, poverty, desperation, chaos.”

Throughout the post-war years, Italy and the United States have cemented a lasting friendship, cultivated a beneficial partnership, and maintained a rock steady defense alliance. From stabilization operations in Iraq and Afghanistan to the Italian-American military presence along NATO’s eastern flank, Italy and the United States remain committed to the cause of freedom throughout the world.

Those we honor here today, if present, would revel at the many achievements that have been built upon the victory that they fought and died for. Ladies and gentlemen, your participation is a tribute to heroes. Their sacrifice is a debt that can never be repaid. It will however, be remembered for eternity.

Thank you for attending today. God bless you and your families. God bless our troops and God bless America.