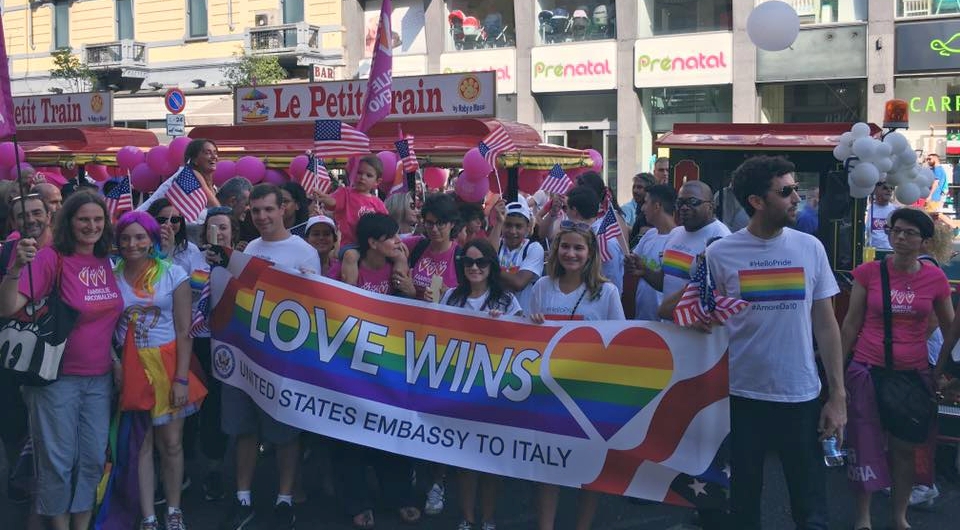 Milano Pride Week concluded on June 25 with the annual Pride Parade, which was attended by a record 200,000 people. A record number of nearly 30 Consulate employees, in addition to Consul General Reeker were in attendance and headed the parade in the second-leading spot.

Employees held a large “LOVE WINS –U.S. Embassy to Italy” banner and waved American flags. The Consulate’s participation in the parade was more significant than ever following the Orlando attacks and its consequently increased visibility in Northern Italy as a purveyor of LGBTQ rights.

This year’s parade was also the first time that American companies were represented en masse, as Google, Microsoft, Discovery Channel and Amazon helped to sponsor the event. 100 employees each from Google and Microsoft and 50 from Discovery Channel participated in the Pride festivities.

Former Milanese Mayor Giuliano Pisapia, newly-elected Mayor Beppe Sala and Pierfrancesco Majorino, Milan’s Councilor for Social Policy and Health Culture, marched with this group.  Having had the new and prior Mayor together in attendance underscores both administrations’ commitment to LGBTQ issues.

Highly publicized was the meeting of Consul General Reeker and Mayor Sala, who shook hands, marched together, and stood for press behind both the American and the “No Exclusions” banner.