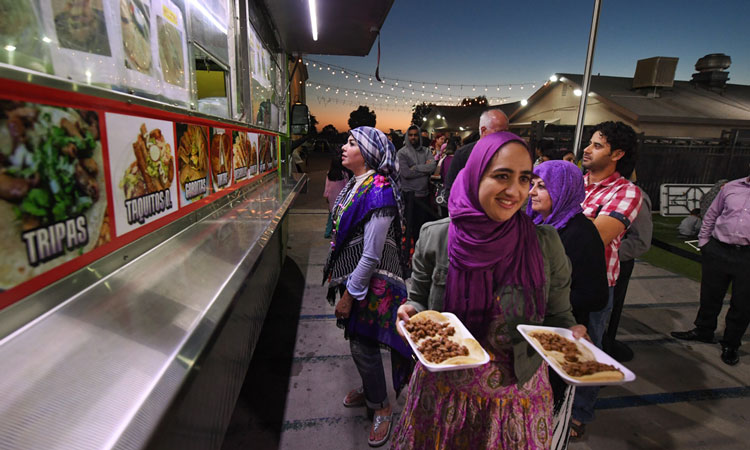 Muslim Americans, like all Americans, represent diverse cultures and traditions found around the world. Ramadan displays this diversity in many ways, including the food prepared for early morning suhoor and sunset iftar meals.

Of the estimated 3.45 million Muslim Americans of all ages living in the United States in 2017, 58% were born in another country, according to the Pew Research Center.

To celebrate the beginning of Ramadan this year, hundreds of Muslims gathered in Times Square on April 2 in New York City to break their fast and pray together. Organizers distributed 1,500 meals and emphasized messages of peace, charity and unity in media interviews. One told CBS News, “We’re here to explain our religion to all those that don’t know what Islam is all about,” he said. “Islam is a religion of peace.”

In California, Rida Hamida embraces her Muslim and Latina identities with her #TacoTrucksInEveryMosque initiative. She partners with local butchers and food trucks to provide halal meals to communities. “I wanted to create a space where we would be celebrated and we would have a sense of joy,” she said in a March interview.

In Oregon, Sahla Denton — who describes herself as half Jamaican and half Mexican — says her family has adapted dishes to make them halal. This Ramadan her family will eat a favorite called escovitch, a Jamaican dish made of fish and topped with onions, carrots and bell peppers tossed in vinegar.

She said a favorite Ramadan memory was going to the mosque for iftar when she was young. “The food was all really good because it was usually a potluck, so there was Mexican food, there was Pakistani food, there was food from all over the place on one table.”