The official ceremony held at the U.S. Consulate General Naples for the anniversary of the Independence Day

This year’s Independence Day held special significance, as it was a moment for Consul General Mary Ellen Countryman to reflect on her past three years in Naples, one of the oldest diplomatic posts in the world, founded in 1796 in, what was at the time, the Kingdom of Naples.

“I am grateful to you all for your support, friendship, and three beautiful impactful years. My time here in Naples has been enriched by continuous discoveries and engaging welcoming people. I have had the opportunity, these past three years, to see the beauty of this land, but also the potential and the commitment to a continuous improvement of the community and the territory. I will remember fondly the people of Naples’ great culture and incredible humanity,” she concluded. The Mayor of Naples, Luigi De Magistris, appreciated the Consul General’s kind words and donated the pennant of the city of Naples to the Consul as a symbol of the “sincere friendship between our two peoples and the excellent diplomatic relations dating back to before the unity of Italy”.

Similar to Independence Day celebrations in the United States, the fireworks over the water marked the end to the festivities. 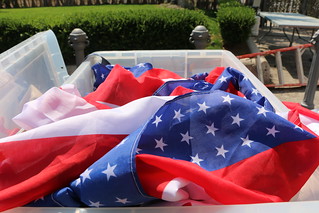