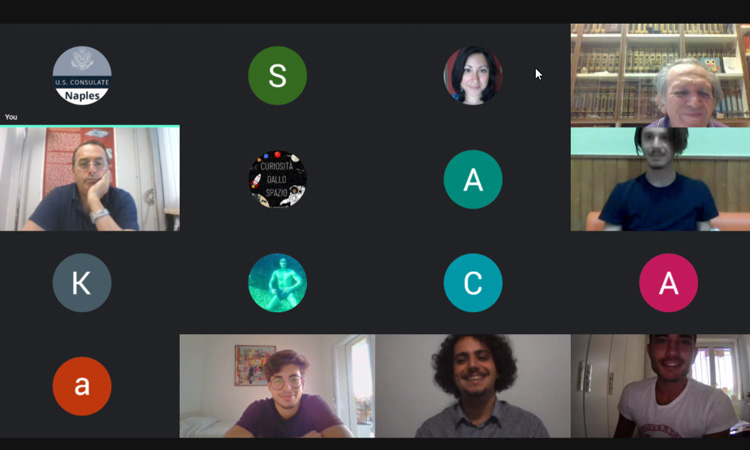 “Take Action” was the theme of the all-virtual “space” weekend that NASA Space Apps kicked off on October 2 starting with a virtual bootcamp followed by the two-day hackathon on October 3-4. During the hackathon, the participants collaborated remotely in eight groups on different challenges, proposing innovative solutions to win the title of Galactic Problem-Solver. U.S. Consulate General Naples ran the event together with local partners including Federico II University’s Department of Industrial Engineering, the Institute of Electromagnetic Sensing of the Environment (IREA,) the Center for the Near Space and the National Institute for Astrophysics (INAF) Capodimonte Astronomical Observatory., The eight virtual pitches and the judging phases were also held virtualyl.

Both the winning teams ‘Spaceminds’ and ‘Solarnet’ were awarded with a special U.S. Mission monetary prize (Euro 500.) Also, the Center for Near Space (CNS) gave a special prize to the Orbiting Builders’ Persephone Program.

Now, the competition becomes global. NASA will select the global winners among the finalists in the following categories: Best Use of Data, Best Use of Technology, Galactic Impact, Most Inspirational, Best Mission Concept, Best Use of Science.

“Thanks to all the participants and the partner institutions: NASA Space Apps Challenge has become one of the signature initiatives undertaken by Mission Italy to promote USG goals regarding science, technology, engineering, and math (STEM) and entrepreneurship themes, while underscoring international collaboration, taking advantage of NASA’s brand appeal and highlighting partnerships with Italian and European institutions,” said PAO Karen Schinnerer after the announcement of the winners.