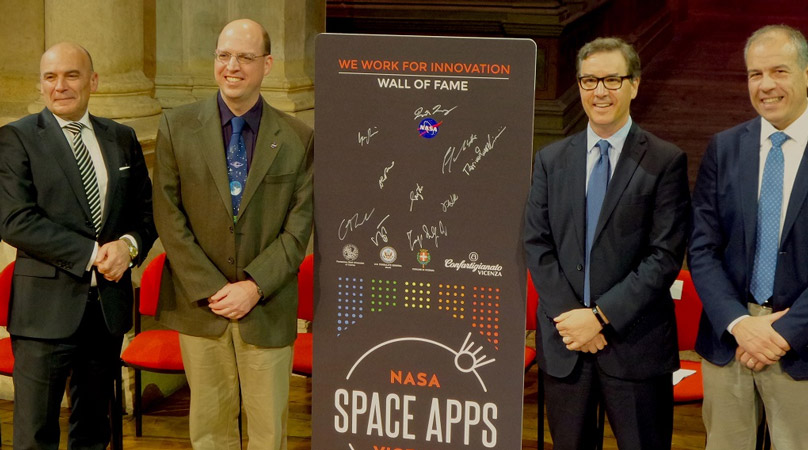 On April 27 the NASA Representative in Europe Timothy Tawney traveled to Vicenza to participate in the kick-off in Italy and in Vicenza of the 2017 NASA Space Apps Challenge.  The media event was held in the prestigious Teatro Olimpico, a UNESCO World Heritage site, designed by Andrea Palladio and inaugurated in 1585.

Local and regional media attended the event and generated positive coverage of the initiative, brought to Vicenza for the first time ever and organized by the U.S. Consulate General Milan with a pool of local sponsors: the City of Vicenza, the local SMEs association Confartigianato Vicenza, and the University of Vicenza.  The event was also covered in the national edition of top circulation Italian daily Corriere della Sera, which on April 28 published a full page article featuring the NASA 2017 Space Apps Challenge and quoted Tim Tawney, “The idea of a global hackathon came from the willingness to engage a younger audience.”

The theme for the 2017 Space Apps Challenge would be Earth Science. “This year’s theme is a recognition of the importance of our planet and a way to involve more people in studying the implications of what science can do to save it,” said Tim Tawney. “Space research allows us to have a better understanding of  what happens on the Earth  from agriculture to the migrations of animals, from water resources to climate, from volcanos to earthquakes – and to improve the lives of millions of people.”