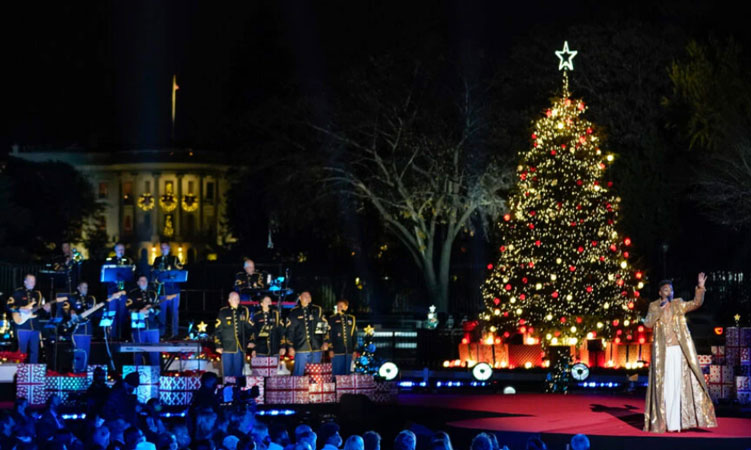 A White House Christmas tradition — with lights, decorations, music and an appearance from the sitting president — turns 100 this year.

On Christmas Eve in 1923, President Calvin Coolidge launched what has become a tradition. That day, he walked from the White House to the Ellipse, where spectators had gathered, to turn on 2,500 red, white and green electric bulbs on a 15-meter balsam fir from Vermont.

The National Park Foundation credits Coolidge’s wife, first lady Grace Coolidge, with the event’s genesis, because a month before she had allowed the District of Columbia Public Schools to set up the Christmas tree.

Some presidents have used the ceremony to weigh in on world affairs and national events.

In 1940, a year before the United States entered World War II, President Franklin Roosevelt denounced war, mentioned the beatitudes of Christ and urged “belligerent nations to read the Sermon on the Mount,” according to the National Park Foundation.

Wartime restrictions precluded the tree from being lit in 1942, 1943 and 1944, but President Harry Truman turned the lights back on in 1945, after the war ended. “This is the Christmas that a war-weary world has prayed for through long and awful years,” he said. “With peace come joy and gladness. The gloom of the war years fades as once more we light the National Community Christmas Tree.”

President Dwight Eisenhower presided over the 1954 ceremony that first debuted entertainment over several evenings and a “Pathway of Peace” — a boardwalk to the National Christmas Tree that features scores of smaller trees decorated by children in each U.S. state or territory, as well as Indigenous children and the children of military personnel.

In 1979, President Jimmy Carter introduced the Hanukkah season by lighting the first candle on a giant menorah that his administration added to the celebration.

The event’s technology has evolved over the years too, including the addition of energy-efficient LED lights in 2007.

The tree lighting went on in 2020 during the COVID-19 pandemic, but without a live audience. The audience returned for the 2021 ceremony. Biden said that the evergreen tree “reminds us that even in the coldest, darkest days of winter that life and abundance will return.”