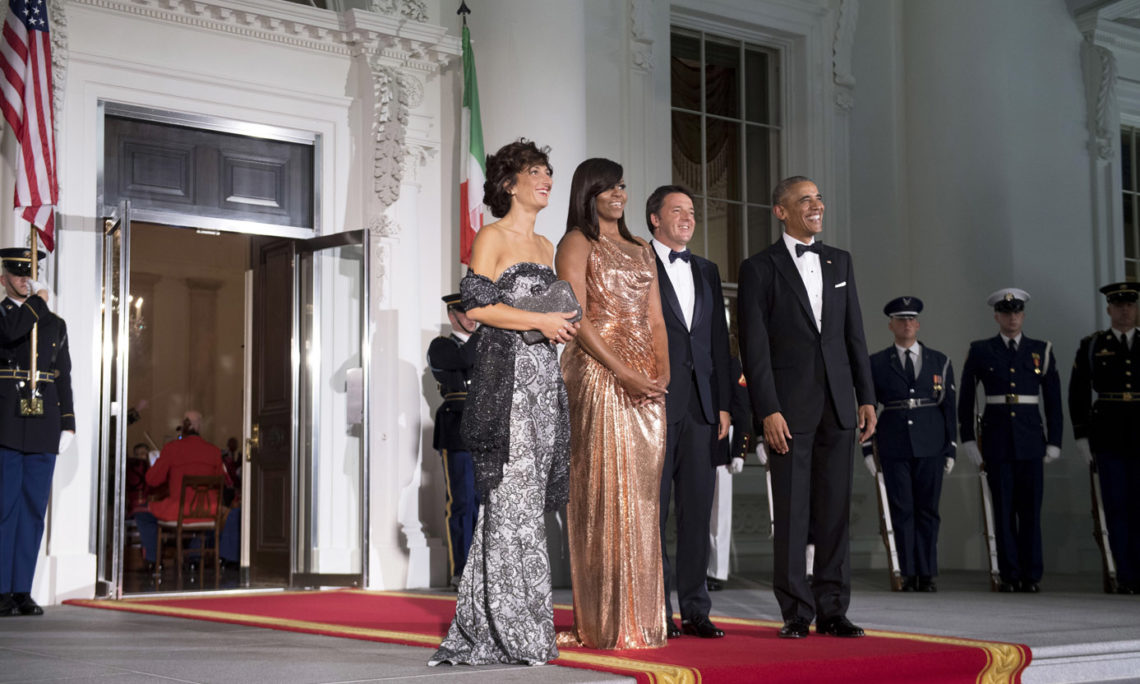 The White House
Office of the Press Secretary
For Immediate Release
October 18, 2016

PRESIDENT OBAMA:  Good evening, everybody!  Buonasera!  On behalf of Michelle and myself, welcome to the White House.  And welcome to the final state dinner of my presidency.  (Applause.) But in the immortal words of a great Italian-American, Yogi Berra — “it ain’t over till it’s over.”  (Applause.)  And so we have a wonderful evening ahead of us as we celebrate the great alliance between the United States and Italy with our great friends, Prime Minister Matteo Renzi — (applause) — and Mrs. Agnese Landini.  (Applause.)

Now, I have to say this is a remarkable crowd.  I will confess that, at first, I was a little nervous about this dinner. After all, Matteo is called Il Rottamatore — The Scrapper, The Demolition Man.  (Laughter.)  And Roberto Benigni is here as well, and he has promised not to jump on the tables.  (Laughter.) Ask any Italian, or Italian-American, and they’ll tell you that the dinners can get somewhat animated.  People can get excited — especially if your grandmother thinks you’re not eating enough.  And so Michelle and I decided to just think of this as a typical Italian Sunday dinner — surrounded by family and great friends, paisans — and pasta.

And tonight, we’re reminded that American democracy has been graced by the touch of Italy.  Our declaration that “all men are created equal” was penned by Thomas Jefferson, and it was a concept shared by his friend, also from Florence, Filippo Mazzei. We stand before the Lincoln Memorial and see the work of the Piccirilli brothers.  We look up at the dome of the U.S. Capitol and marvel at the touch of Brumidi.  Then again, some days our presidential campaigns can seem like something out of Dante’s Inferno.  (Laughter and applause.)

Most of all, we see the spirit of Italy — and the friendships between our people — in so many proud Italian-Americans.  I suspect that many of you here tonight are thinking of your own families — parents, grandparents, great-grandparents — who left the old country, who toiled and sacrificed, and gave everything they had so that the next generation could succeed.  Your presence here tonight shows that America is a place where if you work hard, no matter what you look like, what your last name is, how many vowels you have in your name, you can make it if you try.  And even if we are not Italian-American, or Mets fans, we can celebrate that Mike Piazza is finally in the Baseball Hall of Fame.  (Laughter.)

I also want to take this occasion to once again thank my friend, Matteo.  He may be the youngest prime minister in modern Italian history — he makes me feel old, which is unfortunate.  (Laughter.)  When I came in I was the young guy — now he’s the young guy.  (Laughter.)  But from the first time we met, I could see that he represented the energy and the optimism, the vision and the values that can carry Italy, and Europe, forward.  He is, as you say in Italy, buono come il pane.

Matteo, I cannot thank you enough for your excellent partnership as we’ve worked to advance the security and prosperity of our citizens and the dignity of people around the world.  I understand that when you were growing up, your mother would tell you stories about Robert Kennedy’s commitment to justice and that she would end by telling you — “Matteo, fight.” As you fight for the cause of reform, know that we stand with you.  I believe that Italy, and the world, will continue to benefit from your leadership for many years to come.

Now, one of the reasons that I’m so confident that Matteo will continue to make outstanding contributions is because he has an outstanding partner in Agnese.  Our wives keep us humble.  As our Italian friends know, Matteo’s first claim to fame — when he was just 19 years old — was he was on Italy’s version of Wheel of Fortune.  (Laughter.)  This is a true story.  And Agnese points out that several of the sweaters and the suits that he wore were too big — which is an affront to Italian fashion.  (Laughter.)  Matteo may deny it, but there’s video and you can judge for yourself.  (Laughter.)  Georgio Armani is here, and he would be ashamed to know that the Italian Prime Minister used to wear things like this.  (Laughter.)

Now, you are not alone, because when Michelle was in Milan for last year’s Expo, she spoke with some young people about the importance of eating slowly and savoring your food — unlike President Obama, who she said, sometimes “shovels” his food down. (Laughter.)  Which is true.  (Laughter.)  So the point is that  Matteo and I both married up.  And because of our wives, we eat better, we dress better, we are better.  And we thank you both.  (Applause.)

In closing, I just want to reminisce about my last visit to Rome.  Thanks to Matteo’s Ministry of Culture, I had the opportunity to visit the Coliseum.  And one of the perks of being President is you can go to the Coliseum and nobody else is there. It was late in the day.  It was quiet.  The sun was going down.  As I walked across those ancient stones — worn by the history of 2,000 years — it was a humbling reminder of our place here on Earth.

In the grand sweep of time, each of us is here only for a brief moment.  So many of the things that we focus on each day — the political ups and downs, the successes and the setbacks — those things are fleeting.  What matters in the end is what we build.  What matters is what we leave behind — the things that will endure long after we are gone.  As the poet Virgil reminded us, “fortune favors the bold.”

And so I want to propose a toast — to the enduring alliance between the United States and Italy; to our friends, Matteo and Agnese; and to the friendship between the Americans and the Italians.  In pursuit of the world we can build for future generations, may we always be bold; may fortune smile upon us.  Salute.  Cheers.

And with that, let me bring to the stage the Prime Minister of Italy, Matteo Renzi.  (Applause.)

PRIME MINISTER RENZI:  Mr. President, Madam First Lady, dear American friends, it is an incredible honor.  It’s an incredible privilege to be here with you on this occasion of the last state dinner of President Obama.  I am really excited because I think this is a special moment for the history of this country, as the presidency of President Obama was a special moment in the life of this great country.

So thank you so much.  (Applause.)  It’s, I know for Italy, Barack, it’s an honor for us.  So thank you all, from Agnese and myself, for your warm welcome.

But I really am in a difficult situation, because it’s impossible for me to reply after the President, but I also want you to know that I spent time to imagine something to give — it’s impossible.  I think, Mr. President, that we can organize after the finish of your service a dinner in Florence, after a little look in Uffizi Gallery, and in front of David, and we can prepare such a — really ice cream, Italian ice cream is better on the water, and then not a sea dinner, but we will with the Florentine wine and Tuscan wine we can taste.  And we can really find if the tomatoes of the garden of White House are better than tomatoes of Italian — (laughter and applause.)

And, Barack, you know I’m a huge fan of you.  You know I follow from the first speech in — first speech for the presidential running in February 2007.  And you know, but when I listened to the speech of Michelle in Philadelphia, I think finally, finally, maybe I see when we cooled off, I thought you

— finally I found someone of the same level of Barack Obama — Michelle Obama.  So this is — (applause.)

But let me conclude with a positive consideration.  I come from a city called Florence, so I really — I love lots of the history of my country.  During the Renaissance in Florence, the Masters and students used to work together to produce masterpieces and also a lot of pieces — masterpieces that have endured across centuries.  And these workplace were called botteghe.  Botteghe was the place in which Masters and students together tried to do better, tried to paint — new generation tried inside the botteghe to create a comprehensive vision of the future.  And I think, Mr. President, dear Barack, this is what you have done for us in this period.

Eight years, very important for international community, not only for the United States of America.  And I think your service was the service of a Master of Renaissance, because you work with us to give us an opportunity and we worked together exactly with the strength of botteghe — tried to make better.  Tried to achieve a special opportunity to new generations.

So, as a Florentine, I think I really am grateful to you for your service and also for your message of the — of the government because your message to a lot of new leaders around the world to imagine the future as a good place in which we imagine our destination and our generation.

So in Italy, there is an expression — it is an expression come from Latin.  Con pane.  Con — that is “with”; pane is “bread.”  Con pane comes a lot of things, especially company — why?  Because the value on the table are exactly the sharing not only bread, not only wine, not only food.  But sharing a friendship and a common values.  I think this is the real relation between the United States of America and Italy.  We share the same values, the same friendship.  And, yes, on the table, con pane, we share the bread.  We share the food.  We share also the wine.  But we share the future and the common values.  For all the reasons, I propose a toast.  To President Obama, to First Lady Michelle, thank you so much for your incredible journey.  Thank you so much for your incredible service.  Thank you so much for the value that you inspire not only in the United States of America, but all the world.