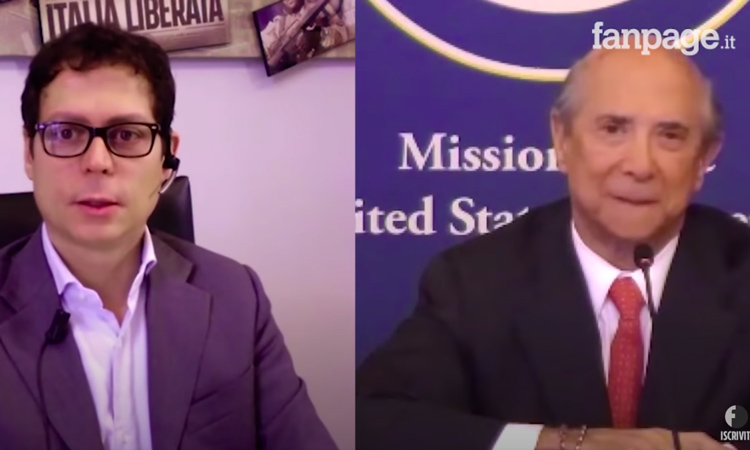 A: Sì and grazie to you. Let me start by paying my condolences, and the screen keeps going on and off, but in a way it reflects the depth of my feeling. It is a very difficult time for Italy, Italia, America, the United States, for all of the world right now. It is unique in our lifetimes to have a pandemic, and such a virulent pandemic.

Q: How is the U.S. dealing with it, how is United States doing?

A: Well, we are several weeks to a month behind Italia, and it has been very fierce. Particularly, I have…my children and grandchildren are in the New York and New Jersey area which has been the hardest hit with over half the cases so far in United States, so it is a great concern as it is here, the loss of many, many lives, too many to count, right now.

A: It is a framework to cover a significant part of the problems that are developing as we speak, and as they have taken place. So, we will be putting a significant amount of aid into NGOs, non government organizations, which we have been doing, it will be increased with regularity. Samaritan’s Purse was one of the first to get here, and has been moving in Italy to do an outstanding job in Cremona. Equipment and supplies: they will be significant. They will not be the ones that the United States needs now at its stage because we too were short of supplies, but across the board, in other areas, it will be significant in supplies. Personnel assistance: You and I spoke before and we made note of the fact that there are 30,000 Americans on military bases, and the military is going to play a key role. It will be providing transportation. It will be taking care of civilians and their families. There will be medical research assistance that will be significant and financial support, and this will become even more meaningful in the weeks ahead to get Italian businesses, small businesses, businesses in general on their feet and moving forward. So, it will be…it will have two goals. It will have the goal of helping Italy defeat COVID-19; and it will have the goal of bolstering trade opening up business and making Italy strong economically again.

Q: So we are in Naples where a main U.S. base is placed so the U.S. military will help us also in the fight against COVID-19 is that right?

Q: Over the 100 million, do you think there will be more money or more help provided by the U.S. in the future?

Q: And also there is all the medical research that is going on, there is a lot of struggling around finding a vaccine. Do you think that a partnership between Italy and the U.S. can be effective also in the medical field?

A: I think very definitely that not only is a possibility, but it’s happening right now. There is a well-known Italian scientist, his name for the moment evades me, who is working with the University of Pittsburgh, and I believe they are very close, one of those closest to developing, let us pray, a vaccine, which will be critical to putting this whole pandemic behind us. So, without question there is room for us to work together.

Q: At first I said that Italy, and you said too that Italy is a month forward of the U.S. in the fight against COVID-19. Is there anything that in the U.S., people learn from the Italian experience, such as medical experts and other stuff?

A: Well, we look to Italy for many things. We had hoped never to have to look to Italy to be first in line to teach us about anything as difficult as this, but, yes, we are learning from the difficult experiences and the knowledge that Italy has now put together. And, it once again provides the kind of partnership that has made us stand together so often in the past.

A: Yes, we’ve had a number of citizens going back, those who were on vacation left earlier looking for departures, but on a continuing basis if someone wants to go back to the United States, our consular section in all of our consulates and in Rome will work to help them return to United States. And, in return, those who want to come back to Italy have been able to return back.

A: So it is my personal believe, that in a moment like this, if there is someone who’s come to give us genuine help, and the ulterior motive does not exist, only the motive to get us healed and well, we should accept all the help that we can get from those who had the experience. I don’t think there is anything that I can think of that will change what basically brings our two countries together or that will prevent it from ever being divided. It’s the democracy that we share, on which individual freedom has become a critical part of life. And I don’t think there will be any kind of force or source that will change those values of individual freedom. But, that doesn’t mean that we can’t work with the rest of the world, particularly in trying to solve problems that are a danger to all, and, clearly, this is one of them. So, I would say, those who come to give help to us, or to Italy, it is a time when we should welcome knowledge and help.

Q: Really last question: as you said you are affected by this because your family is in New York and New Jersey, but also having been the head of New York Port Authority, so I think you’ve got many friends there. Like a personal moment, a personal message from you, from a person who knows very well that city.

A: Yes, this is another 9/11 for me personally, but in a much different respect. The loss of so many friends, and the loss now of so much life and friends who are suffering as we speak, and the concern, the fear I am having for my eleven grandchildren, my three daughters and their husbands – all in the center of where it is worst right now – brings back chilly memories. But, what I do know, and I do know what we share, is this strength of character, and we will get through this, and we will have learned a lot to prevent a coming catastrophe from ever doing this again. So, I’m hopeful and prayerful. I listened to Bocelli sing beautifully in Milano. “Amazing grace,” a song that I heard many times at funerals after 9/11, was so stunningly beautiful, and so stunningly brought the conclusion to a great holiday revered, memories past and memories that would have just occurred. We will win this together, and I thank you for this opportunity to speak to you. Thank you.

Thank you Mr. Ambassador for being with us today.

Indeed, thank you very much.