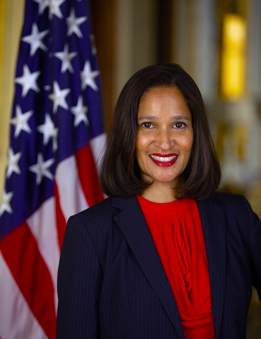 Ragini Gupta joined the U.S. Foreign Service in 2002. In July 2020, Ms. Gupta assumed the position of Consul General at the U.S. Consulate in Florence, Italy. Ms. Gupta spent the several months prior to this assignment studying Italian. Previously, Ms. Gupta served in Washington, D.C. as a Senior Advisor, co-leading implementation of the largest State Department reorganization in 20 years, which created the Global Public Affairs Bureau.

From 2013-2017, Ms. Gupta was Counselor for Public Affairs at the U.S. Embassy in Amman, Jordan. She has also been assigned to the U.S. missions to Mexico, Pakistan, and India, where she served in consular, economic and public affairs positions. Among her Washington assignments, Ms. Gupta served as Director of the Office of Broadcast Services. She also mentored mid-level foreign service officers as a Career Development Officer in the Bureau of Human Resources. She is the recipient of four individual Superior Honor Awards and a nominee for the Edward R. Murrow Award.

Prior to the Foreign Service, Ms. Gupta was a practicing attorney at several large law firms in New York city and litigated civil rights cases for Sabel & Sabel, PC in Montgomery, Alabama. She holds a Juris Doctor degree from New York University School of Law and a Master of Science degree in National Security Strategy from the National War College. She is married to fellow foreign service officer Rohit Nepal and has two children. Her interests include the arts, exploring diverse culinary traditions, and yoga.