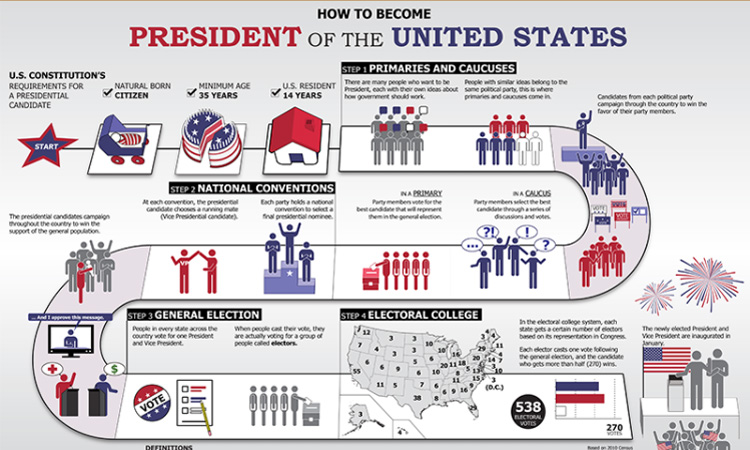 “The vote is the most powerful instrument ever devised by man for breaking down injustice and destroying the terrible walls which imprison men because they are different from other men.” –President Lyndon B. Johnson (1963–1969)

The 59th United States Presidential Election will be held on Tuesday, November 3, 2020 (Wednesday 4th, New Zealand time). Learn more here about how the U.S. election system works below, and join the conversation on Twitter and Facebook.

Americans will go to the polls On November 3, 2020 to cast their ballots for the man who will serve as U.S. president for the following four years, but first they must select delegates who will vote at national conventions to determine which candidates appear on those ballots.

The Road to the White House

The road to the White House seems to lengthen with each successive election cycle. For months, prospective candidates have been testing the waters with exploratory committees, fundraising events and tours of states holding early primaries.

Achieving the U.S. presidency almost certainly will involve first winning the nomination of one of the country’s major political parties by securing the votes of a majority of the delegates attending a national convention.

So-called “third party” candidates — those not affiliated with either the Democratic or the Republican party — could affect the outcome of the race by depriving the major candidates of votes, but, based on U.S. history, are unlikely to be elected themselves.

Democratic and Republican parties set their own rules for selecting delegates and for allocating votes among participating jurisdictions.

How to become a U.S. President

How to Follow the U.S. Elections on Election Day

Many major news outlets will cover the U.S. Elections on Election Day. All you need to do is go online and search “U.S. Elections 2020”.

Follow this link, to learn about the presidential election process, including the Electoral College, caucuses and primaries, and the national conventions.

The process of using electors comes from the Constitution. It was a compromise between a popular vote by citizens and a vote in Congress.