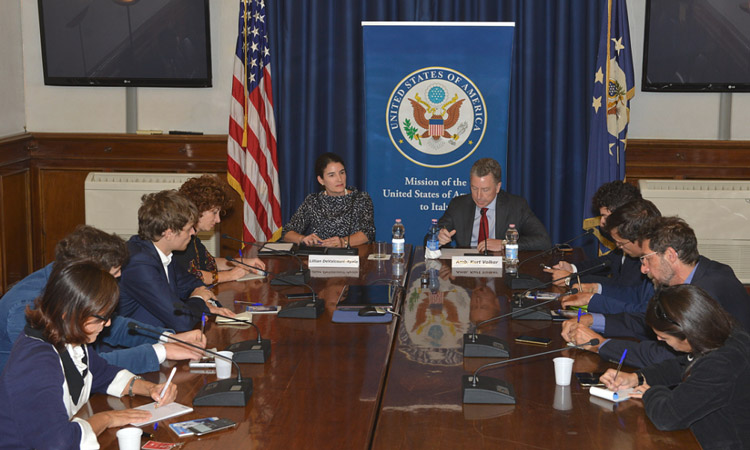 Press Conference with Ambassador Volker for the Italian media

Amb. Volker:  Thank you very much; it is a pleasure to be here.  Great to see all of you.  I am here because I’m having some consultations today and tomorrow with colleagues from the Italian government, Foreign Ministry, also from the Vatican, in order to talk about the ongoing conflict in Ukraine.  I think it’s tremendously important to do this, one of the most important things that we can do is keep the transatlantic community working together to try to solve this conflict.  We can’t have a lack a unity in the Western community; we have to be together.  Thus far, I think we’ve done quite a good job at that.  I think we’ve stuck together, between the U.S., the European Union, with the French and Germans leading the Normandy format of negotiations about Ukraine.  We work very closely with them.  We’ve had good success in maintaining a robust sanctions regime on Russia for its invasion of Ukraine for the last four years, and we’ve also made proposals to Russia about how to resolve the conflict, including through an UN-mandated peace keeping mission.  That has drawn wide support from European countries, from the Ukrainians themselves, the EU, but not from Russia – up to this point.  But we have to keep trying.  So that’s why I’m here.

I want to start off by saying a few words about the situation.  The most important thing that people need to remember is that this is an ongoing war on European soil.  It is not over; it’s not frozen.  There are people fighting and getting shot at every day.  A few people are killed every week.  The humanitarian consequences of this are dire:  over 10,000 people have been killed.  If you remember the West intervened in Bosnia after Srebrenica, which saw about seven or 8,000 men and boys killed in the space of about three days.  We’ve seen over 10,000 people killed in the Ukraine war and that is more than at any time, in any war Europe has produced since the Balkans wars.  There have been over one and a half million people displaced as a result of this war, and that’s more people displaced from a war in Europe since WWII.  So it’s a significant scale of conflict here.

The pre-war population in the Donbas was about four and a half million.  Through voluntary departures as well as violence, it’s now down to about two million, give or take, and that is largely the older people that have remained behind.  Younger people are either afraid of getting pressed into military service by the local occupation authorities or they are leaving for economic reasons because there are no jobs.  So they are moving to where they can work, both men and women.  The older people are largely staying behind to hold down the property, with the hope that it doesn’t get stolen.

There are tremendous hardships for those people on a daily basis.  First and most important, there are threats to their security:  you have shelling every night.  You have sniper fire.  You have unexploded ordinance.  You have landmines.  You have checkpoints so that they are very restricted in their ability to just move about freely.  You have a collapsing economy, which means there is very little source of income.  The heavy industry that had been there previously has largely shut down, so people are having to dig down into their stocks and stores and savings, and to depend upon remittances from their children who might be working somewhere else.  That has resulted in a situation, according to UN estimates, in which about a million people are living in food insecurity.  Food insecurity is defined by the UN as having to spend at least 60% of your income on food.  And of course not everybody’s able to do that because you have to spend your income on a lot of different things, and that’s just one of them.  About a half of that – about 500,000 people – are living in severe food insecurity, meaning about 70% of their income goes just towards food.  So that’s a significant hardship there.

You have severe environmental damages caused by both the conflict itself and also by the collapsed economy.  When you think about heavy industries like steel mills and mines that are not being operated and maintained, that’s resulting in a lot of environmental damage including to underground water supplies.

You have disruptions in all kind of services, everything from people being able to collect their pensions, to the healthcare system, to education, to cellphone networks that go in and out – they’re not permanently gone but it’s creating hardship for the people in those respects as well.

One particular challenge that the UN has highlighted is the spread of an antibiotic-resistant form of tuberculosis, which can be managed in a developed society through a cocktail of different drugs, but is very hard to manage in a place that’s been under occupation and in war.  So it’s one thing after the other for the people who are living there.  I should add that these people are Ukrainian citizens – this is all happening inside the territory of Ukraine – they are all Russian-speaking people and Russia has claimed that one of the things it cares about is the wellbeing of Russian speakers inside Ukraine.  But the fact is that there are Russian speakers throughout Ukraine.  There are in the whole country – Odesa, Kyiv, Kharkiv, Slovyansk.  It’s a country with a significant Russian-speaking population.  The only place where the Russian-speaking population is facing any kind of hardship is where Russia has intervened with its military forces and created this conflict.  That’s the source of suffering for these people.

I just want to say that it is important to be clear that this is 100% under Russia’s command and control.  There shouldn’t be any ambiguity about that. You have military forces that are led by active duty Russian military personnel.  Russian officers are embedded through the chain of command down to the company level.  Russia pays for contract soldiers to then fill out the whole military force and this goes to a Russian firm – that then hires the soldiers and provides them to the Donbas.  The training, the equipment, the troop rotations, the supplies – all of this comes directly from Russia.  And the commanding control is directly under Russian command and control.

That is also true of the two political entities that are there.  These are not indigenous uprisings, ethnic conflicts, civil strife, or anything like that.  These are two political entities that Russia created to create a front for its actions in eastern Ukraine:  the so-called Luhansk People’s Republic and the so-called Donetsk People’s Republic.  And again here Russia has complete command and control of these, including having swapped out the leadership occasionally.  They don’t have any sense of legitimacy within the local population.  They don’t have any place within the Minsk agreements.  They don’t have any place within Ukraine’s Constitution.  They’re there as a Russian creation to create a front, masking Russia’s direct involvement.

In order to get out of this, you have the Minsk Agreements and we strongly support their full implementation.  They are not being implemented, and the reason is principally because of the lack of security.  Russia has basically occupied the territory.  Ukraine cannot access it, so when the Minsk agreements call for things like local elections – you can’t hold local elections under conditions of occupation. Where there’s lack of freedom of movement, there’s lack of freedom of speech and freedom of assembly.  You can’t have campaign rallies.  You can’t have candidates.  You can’t effectively hold an election, so it’s something that Ukraine is required to do under the Minsk Agreements, but it’s not able to do so.

Another thing that Ukraine needs to do – according to the Minsk Agreements – is confer a special status on these territories within Ukraine.  Last week Ukraine yet again passed through the Rada, legislation that would confer a special status on these territories, so they’re doing their part.  It can’t be implemented at this time because there is no opportunity for Ukraine to access and control the territory.  So it is waiting for security.  What that has resulted in – in the Normandy discussions, in the Minsk discussions – is Russia saying “Ukraine is not doing its part,” and Ukraine is saying “well, we can’t, because Russia is still occupying the territory,” and then it’s just a circular discussion.

To try to cut through that we have proposed the idea of a UN-mandated peacekeeping mission that would come into the area, replace the Russian forces, provide security and protection for the local population and create time and space where the Minsk agreements could be fully implemented.  If that were to happen, then at the end of that process – according to the Minsk agreements themselves – the territory then reverts to Ukrainian control.  So this is a device that would actually substantially address the logjam that’s there now.  Ukraine has supported this, France and Germany support this, and we have coordinated our proposals very closely.  Several countries have said that they would be willing to contribute to such a force if it was agreed, but unfortunately Russia has not agreed.  Russia continues to say “we’ll only support a protection force for the monitors that are there,” but this would leave in place these two people’s republics and continue to maintain a divided country, which is not acceptable to anyone.

I should just add a word that of course I’m talking now about eastern Ukraine.  Crimea is also in the same situation, with the additional factor that Russia has claimed to annex Crimea.  Secretary of State Pompeo on July 25th issued a formal declaration on behalf of the U.S. that we do not and will not accept or agree to Russia’s claimed annexation of Crimea.  This is similar to a policy the U.S. put in place in 1940, after the Soviet Union occupied the Baltic States.  We very much see the occupation of Crimea in a similar light.

What we do about this is essentially three things that I mentioned:  we keep putting pressure and the spotlight on Russia to try to get them to resolve this conflict.  We continue to support Ukraine – so that it is more resilient and more capable of surviving all of this, and that includes supporting the Minsk agreement and negotiations.  We are keeping the transatlantic community united, and staying together as we do it.  And that’s the context in which sanctions play a part.  It is something that the transatlantic community has done together – the European Union, the United States.  It is having an impact.  It has not caused a change in Russia’s decision to continue to fight, but it has had a significant impact – we think – in Russia’s calculations both about new activity and about further incursions, stabilizing the conflict at least where it is.  And you see signs that within Russia, there are people who are very unhappy and uncomfortable with these sanctions being in place.  And that is creating an environment that is challenging for President Putin.  It’s important that we keep those sanctions there.