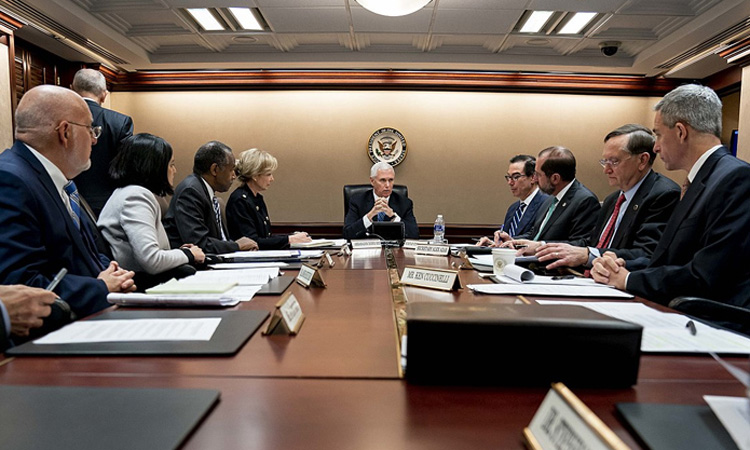 Today, Vice President Mike Pence led a discussion with the chief executives of approximately 50 States, territories, and the city of Washington, DC, and the White House Coronavirus Task Force to discuss local, State, and Federal COVID-19 response and recovery efforts, and America’s reopening.

Vice President Pence led a discussion on best practices from our Nation’s governors on re-opening their States and communities in a phased-approach including efforts to expand testing, support long-term care residents, and maintain necessary healthcare capacity. Dr. Deborah Birx discussed testing and trends, including declining fatalities which continue to decline week over week– on Sunday, fatalities were nearly 10 times lower than they were at the peak a few months ago. Dr. Birx also requested that governors encourage relevant individuals who have recovered from COVID-19 to donate plasma. Several governors discussed the increase in positive cases in individuals under the age of 35. The Vice President Pence asked governors to provide updates on recent testing and trends, provided an update on CDC support in those states, including discussion on county-specific observations. HHS Admiral Brett Giroir provided an update on community-based testing and testing support. Secretary Azar discussed the shipments of the second round of remdesivir which began shipping last week. CMS Administrator Seema Verma stressed that State leaders should redouble their efforts to prioritize the protection of vulnerable seniors, particularly those in nursing homes long-term care facilities. Rear Admiral John Polowczyk provided a logistics update on the expansion of domestic production of key resources (including N95s), restocking the National Stockpile and coordinating with States on their warehousing efforts, delivering PPE to nursing homes, building ventilators on-hand to over 35,000 in the National Stockpile (as of June 22).

Since January 2020, the Trump Administration has led over 310 briefings – including 25 governors’ briefings – with over 131,000 State, local, and Tribal participants.