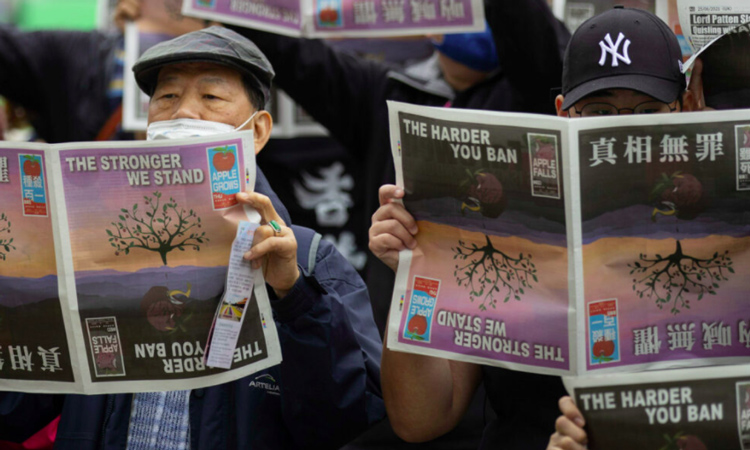 Protesters hold up a special edition of "Apple Daily" during a June 27 protest in London against the People's Republic of China's forced closure of the newspaper. (© May James/SOPA Images/LightRocket/Getty Images)

Violence against journalists is blatant repression. However, authoritarian regimes are finding that less obvious, nonviolent tactics like freezing assets, revoking licenses or blocking access to ink can shutter newspapers without provoking international outcry, according to the watchdog group Reporters Without Borders.

“Someone not paying close attention may assume that the newspaper was the victim of mismanagement or declining public interest,” the group says in a recent report. “But newspapers are often deliberately put to death with terrible consequences for the right to information.”

Regimes in Russia, Burma, the People’s Republic of China (PRC) and elsewhere have forced the closure of at least 22 newspapers since 2017. Reporters Without Borders says the methods often include “judicial harassment or economic strangulation.”

The Media Freedom Coalition, in a July statement, opposed the PRC’s forced closure of the Hong Kong newspaper Apple Daily June 23. The pressure, which involved arresting staff, “undermines Hong Kong’s high degree of autonomy and the rights and freedoms of people in Hong Kong.”

The PRC froze Apple Daily‘s assets, preventing it from paying staff and other expenses, and arrested five editors — including the chief editor. Reporters Without Borders says the forced closure follows authoritarian regimes’ pattern of using economic or other pressure to shutter critical news outlets.

The Cambodia Daily, faced with an unprecedented, $6.3 million tax demand, closed in September 2017. Over the past several years, the Nicaraguan government has launched a series of administrative attacks against print and broadcast media, depriving some daily newspapers, such as the now-shuttered El Nuevo Diario, of imports of paper and ink, and imposing tax penalties on broadcast outlets, such as Channel 12.

Secretary of State Antony Blinken, in a meeting with reporters to commemorate World Press Freedom Day, said the United States is committed to defending human rights, including press freedom. He thanked journalists for the risks they take to hold governments accountable and inform the public.

“People everywhere should be free to express their beliefs, hold opinions without interference, to seek, receive, and share information and ideas,” Blinken said April 28. “We see a free press as vital for human progress. When you harm journalists, you threaten that progress.”