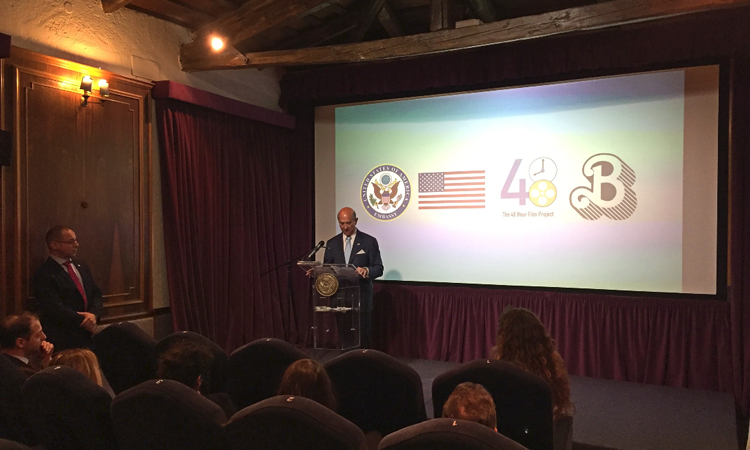 The 48 Hour Film Project is a U.S.-based competition for young and emerging filmmakers. I emphasize young because once you know the rules, it is clear only the young have the energy to compete.

Teams are given only 48 hours to make a movie – to write, shoot and edit it. They can’t really prepare in advance, because the contest begins by each team drawing a card from a hat with a genre written on it. They are then given a character, a prop and a line to include in their films.

For the next 48 hours, fueled by caffeine and adrenaline, they work on their film.  Finally, on Sunday night, the films are screened, and the best film for that competition is selected by a jury of film and media professionals who are with us here this evening.

Last year, this competition took place in 140 cities around the world, including Rome, with 65 teams competing.  More than 1,000 people participated.

Since the competition began in 2001, more than 30,000 short films have been made worldwide, and nearly 400,000 talented, creative young people have participated in more than 900 competitions around the world. Tonight we will be viewing six of these films.

For the past four years, the Rome competition has been organized by the cultural association Le Bestevem.  In a few minutes, you will hear from Ms. Eva Basteiro-Bertoli, one of its founders. But before she speaks, I want to acknowledge four gifted young people here tonight:

Lorenzo Marinelli and Fabrizio Mazzeo, whose film Il Passaggio won the Best Film of the City of Rome in 2016 and at Cannes won the HP prize for the best film and best script.

Stefano de Marco and Niccolò Falsetti, whose film Zero was selected the Best Film of the City of Rome in the 2017.

The American Embassy in Rome is proud to support a truly international film festival which began in America and which gives opportunity to so many creative young people, including amazing young Italian film makers, to showcase their art to the world.