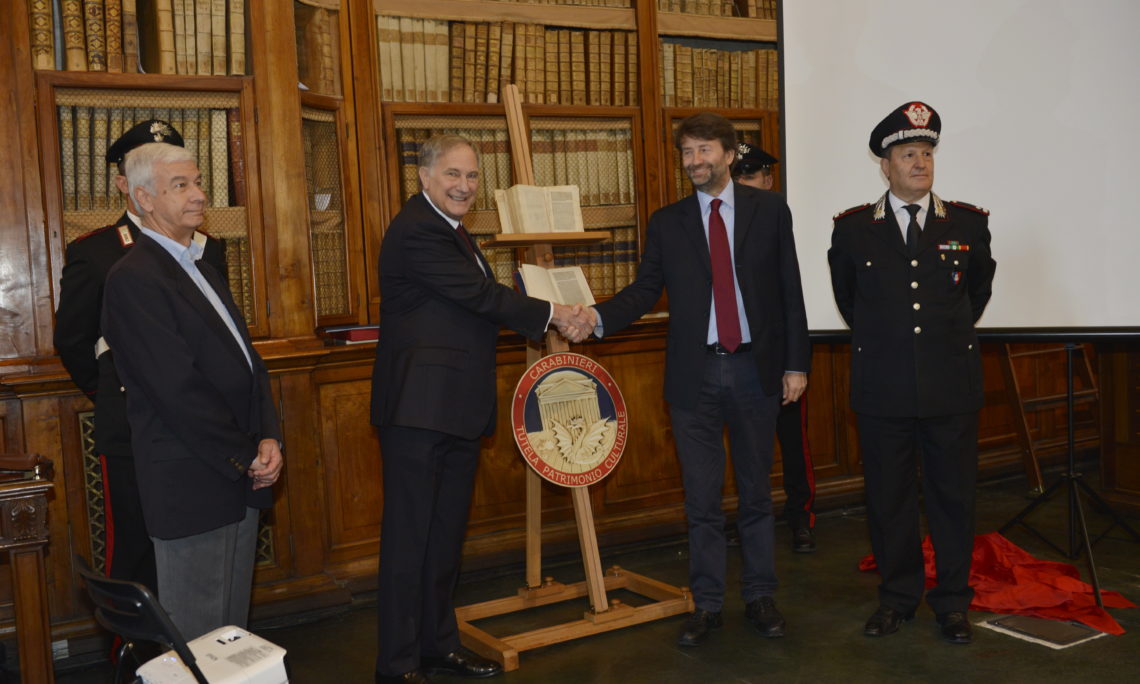 Good morning. It’s a pleasure to celebrate the return of a priceless artifact such as this letter from Christopher Columbus to its rightful owner – the Italian people. Though Columbus was not the first European explorer to reach the Americas, his voyages led to the first lasting European contact with the Americas, inaugurating a period of European engagement with the entire Western Hemisphere that has lasted for several centuries, up until this very day. Christopher Columbus’ voyages had an enormous impact on the historical development of the modern Western world. Many Americans, especially Italian-Americans, feel a deep connection to the Genovese explorer. Columbus, from a certain point of view, has tied our two peoples together for centuries.

The return of this letter is an illustration of these strong links shared by the United States and Italy. It is an honor to be here with you to highlight the close cooperation between our two countries.

Italy is, in fact, one of our primary partners on law enforcement issues. From investigating human-trafficking to halting money laundering, from combating cybercrime to dismantling organized crime, Italians and Americans are more than allies and friends: we are full partners in the fight against crime.

One crime that still needs to be fought is the illicit trafficking and selling of cultural property. The plundering of cultural property is one of the oldest forms of organized cross-border crime. It has become a world-wide phenomenon that transcends frontiers. Cultural property, art, and antiquities are assigned a dollar value in the marketplace, but their cultural and historic value is priceless – their benefit to the public far surpasses any monetary value.

Italy, in particular, is blessed with a rich cultural legacy and therefore cursed to suffer the pillaging of important cultural artifacts. The collaboration between agents from Homeland Security and investigators from the Carabinieri has borne fruit in returning some important artifacts to their rightful home in Italy. This is why we are here today.

Today’s ceremony is a symbol of the United States’ commitment to investigate crimes involving looted or stolen cultural property and art and returning it to its rightful place of origin or owner. In fact, since 2007, more than 7,500 artifacts have been returned to 30 countries including paintings from France, Germany, Poland and Austria, 15th-18th century manuscripts from Peru and Italy, cultural artifacts from China, Cambodia and Iraq and even two dinosaur fossils to Mongolia.

The story behind this ceremony began back in 2012, when U.S. Homeland Security Investigations Special Agent Mark Olexa, and Assistant United States Attorney David Hall, opened an investigation into the possible theft of historically significant, manually printed copies of a letter written in 1493 by Christopher Columbus upon his return from the New World. Addressed to King Ferdinand and Queen Isabella of Spain, the letter details the Italian explorer’s impressions of the people, flora, fauna, and landscape that he encountered in the New World.

Several original copies of this letter exist, and Homeland Security’s investigation revealed that a number of them had been stolen from libraries in Europe and replaced by high-quality forgeries. The investigation expanded and discovered that a copy of the letter in the collection of the U.S. Library of Congress was in fact a letter that had been stolen from the Riccardiana Library in Florence. We still don’t know the date the letter was stolen from the Library in Florence, but we know it was purchased in 1990 in Switzerland by a rare books collector and then sold at auction in New York in 1992.

Once the letter in the Library of Congress was identified as a possible stolen copy, it was taken to the Smithsonian Institution in Washington where an investigation using digital imaging discovered evidence of the use of chemical agents to delete the ink of the Riccardiana library stamp.

Before I end, I want to say a few words of thanks to those who have made today’s ceremony possible. The fact that we are gathered here today is a testament to the hard work of the professionals behind the scenes on both sides of the Atlantic who enforce our laws, keep the peace, and ensure that justice is served. A special thanks goes to the Homeland Security Investigation Team out of Wilmington, Delaware, as well as our Homeland Security Attaché, Mike Unzueta, and the members of his staff, particularly Investigator Mario Coppola, who worked hand-in-hand with the Carabinieri’s Tutela Patrimonio Culturale Unit, and finally to Assistant U.S. Attorney Jamie McCall from Delaware and Special Agents Mark Olexa and Bill Walker, who worked tirelessly on this repatriation and on investigations involving other rare books and manuscripts that have been stolen from Italy. It is this teamwork and cooperation between Homeland Security, the U.S. Department of Justice, and all our partners here in Italy, and around the world, that has made it possible to return this irreplaceable treasure to its rightful place. And, every time we return a piece of history to its rightful place is a moment worth celebrating. 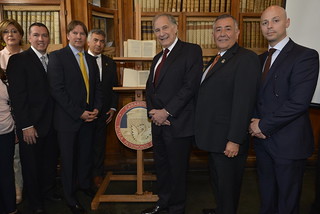