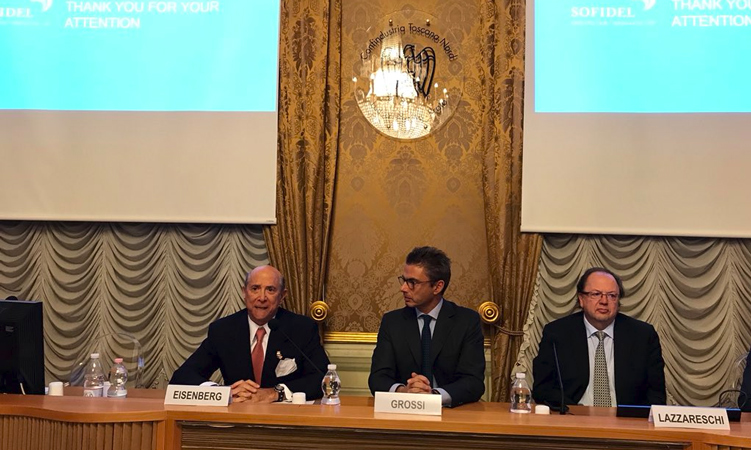 It’s a pleasure to be here in Lucca – a proud city with a long history of independence and enterprise.

Before I begin, let me thank Confindustria Toscana Nord President Grossi for hosting today’s seminar. President Grossi and I agree we can still improve the already impressive economic ties between the United States and Tuscany.  Today’s event aims to do just that.

Let me also thank Luigi Lazzareschi for his remarks. Recently, Sofidel made several important investments in the United States.  Thank you for believing in American workers.

Today’s seminar has two objectives: First, we want to provide a platform for Italian business leaders to network with officials from seven states; and, second, we want to show you how the U.S. diplomatic mission in Italy, through the SelectUSA initiative, can help Italian companies – large and small – thrive in the United States.

I know many of you represent producers of paper and paper products. In the United States, this sector is ripe for investment from Italian firms, who are among the most advanced and efficient in the world.

Let me provide you with a few statistics:

The U.S. forest products sector was responsible for $200 billion in output last year– about four percent of U.S. GDP.

In the United States, almost a million people work directly in the forest products sector. In 45 states, this sector is among the ten largest manufacturing employers.

We are also proud this sector is becoming increasingly sustainable:

We want to see these numbers grow, and I believe they can. As President Trump has said, “There has never been a better time to hire, build, invest, and grow in the United States.”

Over the past two years, America has reformed its corporate tax system and reduced regulations, making our country more “open to business” than ever.

Doing business in America is easy. We have a fast, predictable judicial system, deep and liquid financial markets, a well-educated workforce, and access to some of the best intellectual property in the world.  We have a huge consumer market (over 325 million consumers) and a level of consumer confidence not seen in 18 years.

That said, I want to personally invite you to participate in the sixth SelectUSA Summit, which will take place next year near Washington, DC, from June 10 to 12.

For the past three years, the Italian delegation to the Summit has been one of the top five in Europe. Last year, Tuscany sent more participants than any other Italian region:  We want to keep these trends going!

This event is the largest gathering dedicated to promoting investment in the United States. This year’s Summit was attended by over 1,000 companies from 66 countries, representatives from 51 U.S. states and territories, and four U.S. Cabinet secretaries.

If you are looking to make a new investment, or to expand an existing one, you cannot miss this event.

My team at the Embassy in Rome and the Consulates in Florence, Milan, and Naples are organizing the Italian delegation to the Summit. Please reach out to them if you have any questions.  They are at your complete disposal.

Also, please note registration to the 2019 Summit is now open. Space is limited, so be sure to sign up soon.

In closing, I want to thank you for your time.  My team and I look forward to speaking with you during the coffee break, and working with you as your investment plans develop.  Grazie.