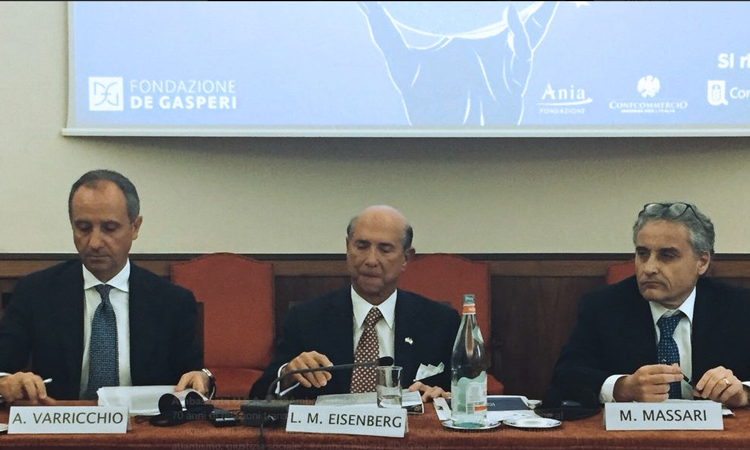 I would like to thank Foreign Minister Angelino Alfano and the De Gasperi Foundation for their kind invitation to speak today.

An American poet Wallace Stevens once said, “All history is modern history.”

That is especially true of our historic transatlantic relationship.

We are here today to commemorate Italy’s April 18, 1948 elections, and the Italian people’s unshakeable commitment to what has became the Atlantic Alliance.

We can trace the origins earlier.  In January 1947, Prime Minister Alcide De Gasperi was a guest of the United States government.  His discussions of post war economic assistance in Washington, Chicago, Cleveland, and New York proved pivotal in the lead up to the 1948 Italian elections.

By the time of the Marshall Plan, middle-aged Americans had seen two European wars in the space of a single generation.

In both World Wars, the United States sacrificed its blood, its treasure, and buried more than half a million young Americans while investing billions, to fight and win.

The final resting place for many of those Americans is here in Italy.

Another 4,400 of our American military rest at the American Cemetery in Florence, alongside the names of 1,400 still missing in action.

From this shared suffering, emerged the wisdom and determination to plot a different course.

America did not pursue a punitive approach.  In Secretary Marshall’s words, “our policy is directed not against any country or doctrine, but against hunger, poverty, desperation, chaos,” and war.

In the years that followed, the United States gave more than 110 billion in today’s dollars to the nations of Europe.

Together, we rebuilt Western Europe after World War II.

Money was only one part of this major investment.  Our nations forged a new and unbreakable bond based on the shared values of freedom, democracy, and humanity.

The United States, Italy, and ten other Allies, founded the North Atlantic Treaty Organization in 1949 for the purpose of collective defense and for the preservation of peace and security.

Today, that alliance has expanded to include 29 member states all committed to safeguarding each other’s freedom and security.

At the time, President Truman said, “we hope to create a shield against aggression and the fear of aggression.”

Article 5 is the steel from which this shield is fashioned.

Let no one question the commitment of the United States to Article 5.

To this day, NATO Allies have invoked Article 5 on one occasion – in defense of the United States after the terrorist attacks of September 11, 2001.

Our Allies in North America and Europe sent a message to the American people: “We are with you.”

Speaking at NATO Headquarters in May last year, President Trump said, “We will never forget the lives that were lost.  We will never forsake the friends who stood by our side.”

Those words rang true then.  They are still true today.

And we have not forgotten the other attacks – against our Allies and other countries – in the years that followed 2001.

On the eve of NATO’s 70th anniversary, we face together, new threats.

A revisionist Russia that invades its neighbors, props up hostile regimes, and works to undermine Western societies from within.  A China that seeks to expand its sphere of influence through military pressure on neighbors and perpetuates dangerous imbalances in the international economy.  And extremist terrorists who plot acts of savagery against our citizens as they go about their daily lives.

We affirm the NATO of the future must include a greater focus on terrorism and on transnational threats facing NATO’s eastern and southern borders.

To paraphrase Secretary Marshall:  with foresight, and a willingness to face up to the vast responsibilities which history has clearly placed upon us, we can overcome these challenges.

Italy’s contributions to NATO exemplify the Alliance’s commitment of “one for all and all for one.”

Italy is a welcoming host to 30,000 U.S. military and civilian personnel and their families – the second largest number in Europe.

The United States greatly appreciates Italian leadership in the Balkans.

And Italy’s major participation in Afghanistan, Iraq, and other difficult places– often the second largest deployment after the United States.

Our covenant with Europe is clear.

We have pledged more than $11 billion since 2017 to the European Deterrence Initiative.

We are providing defensive weapons to Ukraine and Georgia.

And Italy, too, in Latvia, participates in the enhanced Forward Presence mission.

Nearby in Naples, U.S. Admiral James Foggo leads the development of NATO’s Hub for the South.

We thank Italy for its contributions to this Article 2 initiative.

The Hub can enhance our work with partners and provide NATO with the tools to counter the complex threats on Europe’s southern frontier.

Our pursuit of shared peace and security is evident in the assistance we provide to countries of North Africa, and in the aid and encouragement we provide to reforms in Eastern Europe and Ukraine.

It is also evident in the reduced barriers to U.S. LNG exports to Allies, and in the cooperation on border security and intelligence-sharing, that we carry out every single day.

What more can Allies do?

Peace comes through strength:  Stepping up on defense; investing in the future, and contributing to operations.

President Truman told the U.S. Congress, “I am sure that the determination of the free countries of Europe to protect themselves will be matched by an equal determination on our part to help them.”

That was true then.  It is true today.

In 2017, European Allies and Canada increased their defense expenditure by almost 5 percent in real terms.

But, all of us must invest more.

The United States devotes 3.5 percent of GDP to defense, and over 25 percent of defense spending to major equipment.

Every Ally – each and every one of us – has a responsibility to uphold the principle of “self-help and mutual aid” in accordance with Article 3 of the Washington Treaty.

The Wales Defense Investment Pledge is also about investment in capabilities, like the F-35.

As members of the Global Coalition, NATO and its Allies have committed to the total defeat of ISIS.

And we thank Italy’s Carabinieri and Army for their significant roles in the Coalition training of Iraq’s security forces.

Now, we must follow through.  Our work over the coming year will require intensified effort to stabilize communities which have been liberated from ISIS.

Together, we will ensure Afghanistan is never again a safe haven for terrorists.

Prime Minister De Gasperi’s decision to ensure Italy’s participation in the Marshall Plan cemented Italy’s place as a founding Ally of NATO. And through its implementation and coordination, it laid the foundation for the architecture of a new and vibrant Europe.

A strong and free Europe is of vital importance to the United States.

Less than a decade from Marshall’s speech at Harvard, the future European Union was born right here in Rome.

In conversations in Italy and with European leaders, President Trump has reaffirmed the strong bond between the United States and Europe and the shared goals of fighting global terrorism and protecting our homelands.

We welcome the European Union’s efforts to strengthen its defense and NATO-EU cooperation.

Avoiding duplication with NATO, however, will be critically important.

NATO’s strength is based not only on its military might, but also on our shared commitment to the fundamental values enshrined in the Washington Treaty:  democracy, individual liberty, and the rule of law.

Our determined cooperation and coordination has never been more important.

As we commemorate the vision of Prime Minister De Gasperi, I find no words more eloquent than his own to describe the history of our relationship and illuminate the future of the transatlantic community:

“America seeks to lift up Europe, to help the countries of Europe reach agreement, and to create economic possibilities so that they become the bulwark for peace.”