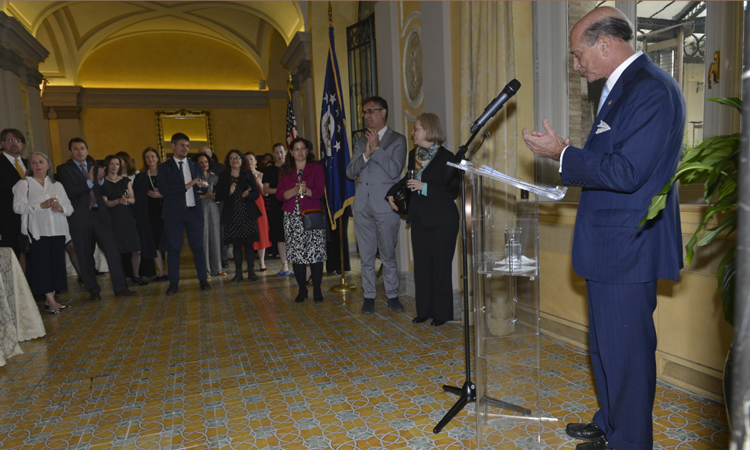 Good evening everyone, and welcome to Villa Taverna. It is a great pleasure to honor the American Academy in Rome and the women and men who contribute to galvanizing the Academy’s position as one of the most prominent cultural institutions not only in Rome, but in Europe.

I’d especially like to welcome the Academy’s President Mark Robbins and Director John Ochsendorf along with the Rome Prize Fellows and Italian Fellows who are present this evening, and the many friends of the Academy here with us tonight.

Over the past century, rather than staying cloistered in their beautiful location on the Janiculum Hill, the American artists and academics in various disciplines who have come to Rome to pursue their goals and fulfill their artistic expectations have chosen to descend from the Academy to interact with this city and its citizens.

The Academy traditionally has nurtured and supported American artists and scholars who, in part thank to their professional and human experience in Rome, have gone on to become some of our most prominent cultural and academic figures, representing our country exceptionally well on the national and international cultural scene.

At the same time as the American fellows have ventured out into this incredible city, the Academy has drawn others in, becoming the ideal meeting place to bring together artists and scholars of all nationalities.

They come to read together in the Academy library; study architecture and debate ideas in seminars; and perform new music side by side in multinational orchestras.

And starting in 2005, Italian fellows became a permanent part of the Academy’s community.

The U.S. Embassy in Rome has long collaborated with the Academy on its programs. This year, we were pleased to support its programs on the theme “New Work in the Arts & Humanities: East/West,” featuring a series of events in several disciplines exploring exchanges and conflicts between the West and the Islamic World.  One of the programs featured a lecture by the well-known American novelist Don DeLillo.

For all of these reasons, I would like to congratulate President Robbins and Director Ochsendorf along with all of the fellows for their contributions to the vibrant cultural community here, in the United States, and beyond.

In a few moments, we’ll here from some of the fellows, which I think will give everyone here a better understanding of the Academy’s fine work.

I would now like to invite Mark to say a few words.