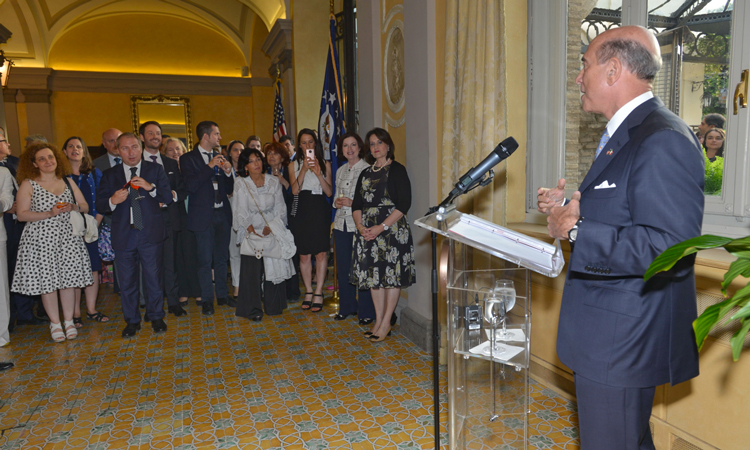 Good evening, thank you all for joining us at this wonderful gathering, and welcome to Villa Taverna.

I would like to recognize the following notable guests for their support and role in organizing the Fulbright 70th anniversary event:

We are here today because a young American Senator, J. William Fulbright, conceived the idea in the aftermath of the Second World War to establish a cultural and educational exchange program between the United States and countries around the world.

The Fulbright program was established in Italy in 1948.  Since its inception, more than 10,000 American and Italian citizens have received a Fulbright grant.

It is the most important and largest cultural and academic exchange program run by the U.S. Department of State.  It continues to offer opportunities for students and scholars to undertake graduate studies, advanced research and university teaching worldwide.

Globally, 54 alumni have received Nobel Prizes.  The Fulbright Program in Italy boasts six Nobel prizes among its alumni.  Furthermore, the American Fulbright alumni include ambassadors, members of Congress, judges, heads of corporations, among others.

The longevity of this academic program attests to its past success, and I have every expectation that it will continue to foster significant cultural ties for years to come. In a continued effort, we are appreciative for the Italian Government’s recent increase in grants funding.

The Fulbright 70th anniversary event we celebrate today is a unique opportunity for Fulbright grantees, whose paths usually would not cross, to interact with one another and develop professional networks.

This year 33 Italian Fulbright scholars and students will travel to the United States.  Their projects range from a search for advanced applications of novel thin film Titanium Nitride to the study of Numerical Modeling of Cartilage Tribology, and from the study of sustainability of human life on Earth to case studies in food safety.

The 38 American Fulbright scholars and students who came to Italy this year developed projects that range from the AGO2 protein’s function during the DNA break repair to the development of “smart” bone implant material, and from tracing the selection and resettlement process of refugees to the study of Sicilian olive oil.

The American grantees are currently at such prestigious institutions as the Bocconi University of Milan, the University of Bologna and LUISS in Rome.

To those leaving later this year for their programs in America, I urge you to not only use this opportunity to pursue your professional interests, but to take time to experience America, its diverse cultural offerings and its people.  It is a fascinating time to be in the United States.

To those whose time is winding down here in Italy, I hope that you have found the time you spent here rewarding.  I want to thank you for your contributions to building strong bridges between Italy and the United States.

To the leaders of tomorrow, I would like to wish the best of luck. May you continue to thrive, flourish, and grow in your professional environments.

Thank you.  I’d now like to invite Paola Sartorio to the podium. 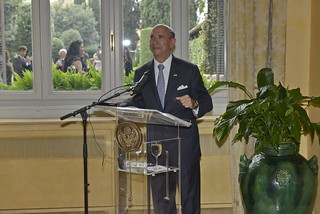