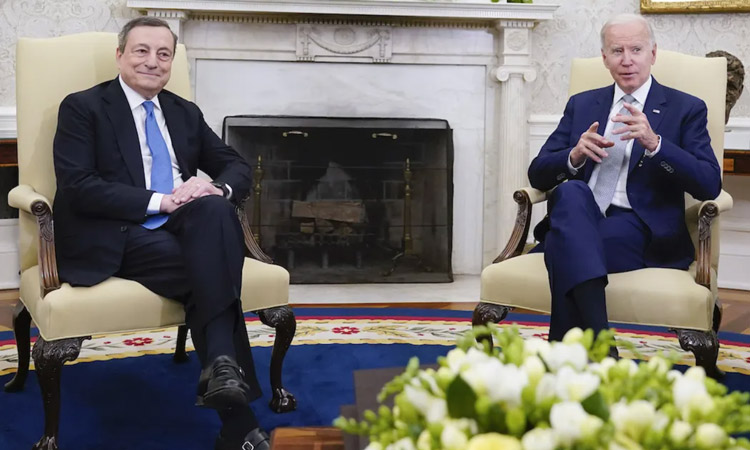 PRESIDENT BIDEN:  Well, Mr. Prime Minister, it’s great to have you here.  You’ve been a good friend and a great ally.  And it’s my pleasure to welcome you to the White House and have a chance to repay some of the hospitality that you — you extended to me at the G20 Summit and in Rome.

PRESIDENT BIDEN:  So, we’re spending a lot of time together.

You’ve been one of the closest allies we’ve had in responding to (inaudible) brutality of Putin.  And I just think that your cooperation at — sometimes at a greater cost to others to take on Putin and what’s going on in Ukraine has been really incredible.

And you know, Mr. Prime Minister, Italy and the United States have a long history of shared bonds and so many — so many Italian Americans who are so proud of their heritage here, as you’ve observed.

And so, welcome.  We have a lot to talk about.  And the floor is yours.

PRIME MINISTER DRAGHI:  If Putin ever thought that he could divide us, he failed.  There’s no question about that.

We stand together in condemning the invasion of Ukraine, on sanctioning Russia, and on helping Ukraine, as President Zelenskyy is asking us to do.

But I have to tell you that in Italy and in Europe now, people want to put an end to this massacres — to these massacres, to this violence, this butchery that’s happening.   And people think about what can we do to bring peace.

We certainly have to use any direct, indirec- — indirect channel of communication.  But is that enough?  What can we do?

People think that — at least they want to think about the possibility of bringing a ceasefire and starting again some credible negotiations.  That’s the situation right now.  I think that we have to think deeply on how to address this.

We will continue, you and I, to work on energy security —

PRESIDENT BIDEN:  Yes, we will.

PRIME MINISTER DRAGHI:  — food security, especially, which is now another issue there.  We’ll talk later about that, what to do.

And — and then, the other thing that I want to say, just at the opening — and then I don’t think we will discuss this later — but what happened in Ukraine is going to bring a drastic change in European Union.

PRIME MINISTER DRAGHI:  We’ve always been close.  Now we’re going to be much closer.  And — but I know I can — I can count on your support as a true friend of Europe and of Italy, of course.

PRESIDENT BIDEN:  Well, look, and just one — I want to add one thing that.  I believe that a strong European Union is in the interest of the United States.  Granted, that’s competition, economically, but it’s good.  It’s good.

And I joked when the Union was formally formed, saying this is like — we have a thing called the “Commerce Clause.”

PRESIDENT BIDEN:  You go from one state to the other —

PRESIDENT BIDEN:  And it’s good for everyone.  And the thing that I most appreciate about you is that our effort from the very beginning to bring NATO and the EU in lockstep — Putin really believed he could split us.

PRESIDENT BIDEN:  And we got — we’ve — we’ve all stepped up.

But at any rate, I’m delighted you’re here, anxious to talk to you.

And watch how they get out of here without getting hurt.  They actually walk out of the room without knocking each other down.