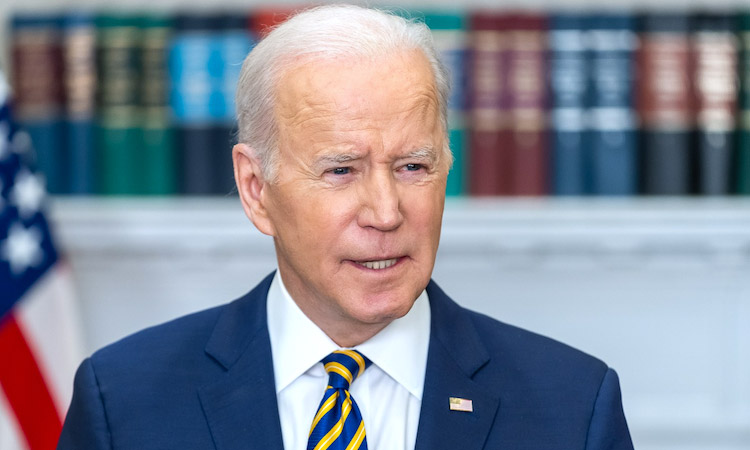 THE PRESIDENT:  Good morning.  I’m sorry to keep you waiting.  I’ve just spoken for some time with President Zelenskyy of Ukraine.

I told him, as I have each and every time we’ve spoken, the United States stands with the people of Ukraine and their bravely — as they bravely fight to defend their country.  And they are doing that.

And as Putin continues his merciless assault, the United States and our Allies and partners continue to work in lockstep to ramp up the economic pressure on Putin and to further isolate Russia on the global stage.

Later today, together with other NATO Allies and the G7 — Canada, France, Germany, Italy, Japan, the United Kingdom — as well as the European Union — we’re going to jointly announce several new steps to squeeze Putin and hold him more — even more accountable for his aggression against Ukraine.

And I want to speak to a few of those points today.

In the United States, we call this “permanent normal trade relations” — PNTR — but it’s the same thing.  Revoking PNTR for Russia is going to make it harder for Russia to do business with the United States.  And doing it in unison with other nations that make up half of the global economy will be another crushing blow to the Russian economy that’s already suffering very badly from our sanctions.

And I want to thank Speaker Pelosi, Leader McCarthy, Leader Schumer and McConnell, and Senators Wyden and Crapo, Representatives Neal and Brady for their bipartisan leadership on this in the Congress.

I would like to offer a special thanks to Speaker Pelosi

who has been a strong advocate for revoking PNTR and who agreed to hold off on that in the House until I could line up all of our key allies to keep us in complete unison.  Unity among our allies is critically important, as you all know, from my perspective, at least.

Many issues divide us in Washington, but standing for democracy in Ukraine, pushing [punishing] Russia’s aggression should not be one of those issues.

The free world is coming together to confront Putin.  Our two parties here at home are leading the way.  And with that bipartisan cooperation, I’m looking forward to signing into law the bill revoking PNTR — which is, again, most people think of it as “most-favored-nations” status.

We’re also taking a further step of banning imports of goods from several signature sectors of the Russian economy, including seafoods, vodka, and diamonds.

And we’re going to continue to squeeze Putin.  The G7 will seek to deny Russia the ability to borrow from leading multinational institutions, such as the International Monetary Fund and the World Bank.

Putin is an aggressor — is the aggressor.  And Putin must pay the price.

The G7 is also stepping up pressure on corrupt Russian billionaires.  We’re adding new names to the list of oligarchs and their families that we’re targeting.  And we’re increasing coordination among the G7 countries to target and capture their ill-begotten gains.

They support Putin.  They steal from the Russian people.  And they seek to hide their money in our countries.  They’re part of a — that kleptocracy that exists in Moscow.  And they must share in the pain of these sanctions.

And while we’re going after these — their superyachts and their vacation homes worth hundreds of milli- — millions of dollars, we’re also going to make it harder for them to buy high-end products manufactured in our country.  We’re banning the export of luxu- — luxury goods to Russia.  They’re also the latest steps we’re taking, but they’re not the last steps we’re going to take.

And as I said at the beginning of all of these steps, we’re going to hit Putin harder because the United States and our closest Allies and partners are acting in unison.

The totality of our sanctions and export controls is crushing the Russian economy.

The ruble has lost more than half its value.  They tell me it takes about 200 rubles to equal 1 dollar these days.  The Moscow stock exchange has been closed for fully — for two weeks because they know the moment it opens, it will probably collapse.

The list of businesses and international corporations leaving Russia is growing by the day.

We’re also continuing the close corporations [cooperation] with Allies and partners to make sure that the close cooperation we continue to have, the Ukrainian people are — are able to defend their own nation.

The United States has sent more than $1 billion in security assistance to Ukraine over the last year, including anti-armor and anti-air capabilities — taking out tanks and planes and helicopters — with new shipments arriving every day.

We, the United States, are also facilitating significant shipments of security assistance from our Allies and partners to Ukraine.

On the humanitarian front, we’re working closely with the U.N. and humanitarian organizations to support the people of Ukraine who have been displaced by the violence in Ukraine.

We’ve joined in this effort by more — with more than 30 other countries who are providing hundreds of millions more.

And last night, to their great credit, the Congress passed a bipartisan spending bill that included an additional $13.6 billion in new assistance to the Ukrainian people.  And I look forward to signing that immediately.

And I also want to be clear though: We will make sure Ukraine has weapons to defend against an invading Russian force.  We will — we will send money and food and aid to save the Ukrainian people.  And I will welcome the Ukrainian refugees.  We should welcome them here with open arms if they need access.

And we’re going to provide more support for Ukraine.  We’re going to continue to stand together with our Allies in Europe and send an unmistakable message: We will defend every single inch of NATO territory with the full might of a united and galvanized NATO.

We will not fight a war against Russia in Ukraine.  Direct confrontation between NATO and Russia is World War Three, something we must strive to prevent.

But we already know Putin’s war against Ukraine will never be a victory.

He hoped to dominate Ukraine without a fight.  He failed.

He hoped to fracture European resolve.  He failed.

He hoped to weaken the transatlantic alliance.  He failed.

He hoped to split apart American democracies, in terms of our positions.  He failed.

The American people are united.  The world is united.  And we stand with the people of Ukraine.  We will not let autocrats and would-be emperors dictate the direction of the world.

Democracies are rising to meet this moment, rallying the world to the side of peace and the side of security.

We’re showing our strength, and we will not falter.

May God bless all of you.  God bless Ukraine.  And God bless our troops.

Q    President Biden, your White House has said that Russia may use chemical weapons or create a false-flag operation to use them.  What evidence have you seen showing that?  And would the U.S. have a military response if Putin does launch a chemical weapons attack?

THE PRESIDENT:  I’m not going to speak about the intelligence.  But Russia would pay a severe price if they used chemical weapons.