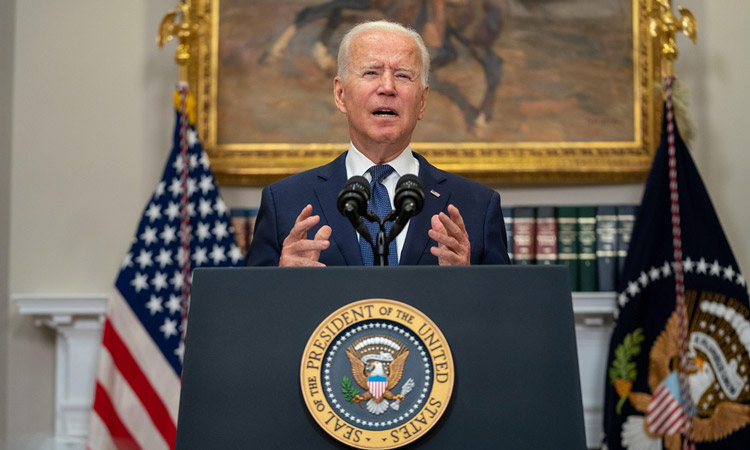 THE PRESIDENT:  Good morning, folks.  Sorry to keep you waiting.  I was on a couple of phone calls.

We’re banning all imports of Russian oil and gas and energy.

That means Russian oil will no longer be acceptable at U.S. ports, and the American people will deal another powerful blow to Putin’s war machine.

This is a move that has strong bipartisan support in the Congress and, I believe, in the country.

Americans have rallied support — have rallied to support the Ukrainian people and made it clear we will not be part of subsidizing Putin’s war.

This made — we made this decision in close consultation with our Allies and our partners around the world, particularly in Europe, because a united response to Putin’s aggression has been my overriding focus, to keep all NATO and all of the EU and our allies totally united.

We’re moving forward on this ban, understanding that many of our European Allies and partners may not be in a position to join us.

The United States produces far more oil domestically than all of European — all the European countries combined.  In fact, we’re a net exporter of energy.  So we can take this step when others cannot.

But we’re working closely with Europe and our partners to develop a long-term strategy to reduce their dependence on Russian energy as well.

Over the last week, I’ve spoken with President Zelenskyy several times to hear from him about the situation on the ground and to consult and continuing to consult with our European allies and — about U.S. support for Ukraine and the Ukrainian people.

Thus far, we’ve provided more than $1 billion in security assistance to Ukraine.  Shipments of defensive weapons are arriving in Ukraine every day from the United States.  And we, the United States, are the ones coordinating the delivery of our Allies and partners of similar weapons, from Germany to Finland to the Netherlands.  We’re accom- — we’re — we’re working that out.

We’re also providing humanitarian support for the Ukrainian people, both those still in Ukraine and those who have fled safely to a neighboring country.

We’re working with humanitarian organizations to surge tens of thousands of tons of food, water, and medical supplies into Ukraine, and with more on the way.

Over the weekend, I sent Secretary Blinken to visit our border between — the border Poland and Ukraine and to Moldova to see what the situation was firsthand and report back.

General Milley, Chairman of the Joint Chiefs of Staff of our Defense Department, is also — was also in Europe, meeting with his counterparts and Allies on NATO’s eastern flank to reassure them — those countries bordering Russia, NATO countries — that we will keep our NATO commitment — a sacred commitment to Article — of Article 5.

The Vice President Harris is going to be traveling to meet with our allies in Poland and Romania later this week as well.

I’ve made it clear that the United States will share in the responsibility of caring for the refugees so the costs do not fall entirely on the European countries bordering Ukraine.

And yesterday I spoke with my counterparts from France, Germany, and the United Kingdom about Russia’s escalating violence against Ukraine and the steps that we’re going to take together with our Allies and partners around the world to respond to this aggression.

We are enforcing the most significant package of economic sanctions in history, and it’s causing significant damage to Russia’s economy.

And preventing Russia’s Central Bank from propping up the ruble and to keep its value up.  They’re not going to be able to do that now.

We cut Russia’s largest banks from the international financial system, and it’s crippled their ability to do business with the rest of the world.

In addition, we’re choking off Russia’s access to technology, like semiconductors that are — and sap its economic strength and weaken its military for years to come.

Major companies are pulling out of Russia entirely, without even being asked — not by us.  Over the weekend, Visa, Mastercard, American Express — they all suspended their services in Russia.  All of them.

Joining a growing list of American and global companies from Ford to Nike to Apple, they’ve suspended their operations in Russia.

The U.S. stock exchange has halted trading of many Russian securities.  And the private sector is standing united against Russia’s vicious war of choice.

The U.S. Department of Justice has assembled a dedicated task force to go after Russian — the crimes of Russian oligarchs.

And we’re joining with our European allies to find and seize their yachts, their luxury apartments, their private jets, and all their ill-begotten gains to make sure they share in the pain of Putin’s war.

These, by the way, are giant yachts.  You put some of them in your press.  I mean, some of them are — I think I read one was over 400 feet long.  I mean, it’s — this is worth hundreds of millions of dollars.

The decision today is not without cost here at home.  Putin’s war is already hurting American families at the gas pump.

Since Putin began his military buildup on Ukrainian borders, just since then, the price of the gas at the pump in America went up 75 cents.  And with this action, it’s going to go up further.

I’m going to do everything I can to minimize Putin’s price hike here at home.  In coordination with our partners, we’ve already announced that we’re releasing 60 million barrels of oil from our joint oil reserves.  Half of that — 30 billion — million — excuse me — is coming from the United States.

And we’re taking steps to ensure the reliable supply of global energy.

And we’re also going to keep working with every tool at our disposal to protect American families and businesses.

Now, let me — let me say this.  To the oil and gas companies and to the finance firms that back them: We understand Putin’s war against the people of Ukraine is causing prices to rise.  We get that.  That’s self-evident.  But — but, but, but — it’s no excuse to exercise excessive price increases or padding profits or any kind of effort to exploit this situation or Ameri- — or American consumers — exploit them.

Russia’s aggression is costing us all, and it’s no time for profiteering or price gouging.

I want to be clear about what we’ll not tolerate, but I also want to acknowledge those firms in oil and gas industries that are pulling out of Russia and joining other businesses that are leading by example.

Even amid the pandemic, companies in the United States pumped more oil during my first year in office than they did during my predecessor’s first year.

We’re approaching record levels of oil and gas production in the United States, and we’re on track to set a record of oil production next year.

In the United States, 90 percent of onshore oil production takes place on land that isn’t owned by the federal government.  And of the remaining 10 percent that occurs on federal land, the oil and gas industry has millions of acres leased.  They have 9,000 permits to drill now.  They could be drilling right now, yesterday, last week, last year.  They have 9,000 to drill onshore that are already approved.

Second, this crisis is a stark reminder: To protect our economy over the long term, we need to become energy independent.

I’ve had numerous conversations over the last three months with our European friends of how they have to wean themselves off of Russia — Russian oil.  It’s just not — it’s just not tenable.

It should motivate us to accelerate the transition to clean energy.  This is a perspective, as I said, that our European allies share and the — a future where together we can achieve greater independence.

Loosening environmental regulations or pulling back clean energy investment won’t — let me explain — won’t — will not lower energy prices for families.  But transforming our economy to run on electric vehicles powered by clean energy with tax credits to help American families winterize their homes and use less energy, that will — that will help.

And if we can — if we do what we can, it will mean that no one has to worry about the price at the gas pump in the future.

That’ll mean tyrants like Putin won’t be able to use fossil fuels as weapons against other nations.

And it will make America a world leader manufacturing and exporting clean energy technologies of the future to countries all around the world.

This is the goal we should be racing toward.

Putin’s war — Putin’s war has caused enormous suffering and needless loss of life of women, children, everyone in Ukraine — both Ukraine and, I might add, Russians.

Ukrainian leaders, as well as leaders around the world, have repeatedly called for a ceasefire, for humanitarian relief, for real diplomacy.  But Putin seems determined to continue on his murderous path no matter the cost.

Last week, he attacked the largest nuclear power plant in Europe, with an apparent disregard for the potential of triggering a nuclear meltdown.

He has already turned 2 million Ukrainians into refugees.

Russia may continue to grind out its advance at a horrible price, but this much is already clear: Ukraine will never be a victory for Putin.

Putin may be able to take a city, but he’ll never be able to hold the country.  And if we do not respond to Putin’s assault on global peace and stability today, the cost of freedom and to the American people will be even greater tomorrow.

So we’re going to continue to support the brave Ukrainian people as they fight for their country.  And I call on Congress to pass the $12 billion Ukraine assistance package that I have asked them for of late.

The Ukrainian people are demonstrating by their physical courage that they are not about to just let Putin take what he wants.  That’s clear.  They’ll defend their freedom, their democracy, their lives.

People everywhere — and I think it’s maybe even surprised some of you all — people everywhere are speaking up for freedom.  And when the history of this war is written, Putin’s war on Ukraine will have left Russia weaker and the rest of the world stronger.

May God bless all those heroes of Ukraine.  And now I’m off to Texas.  Thank you very, very much.

THE PRESIDENT:  I know — I know there’s a lot of questions, but there’s a lot more that has to be made clear.  And I’m going to hold on that until we get more information.  Thank you.  Appreciate it.