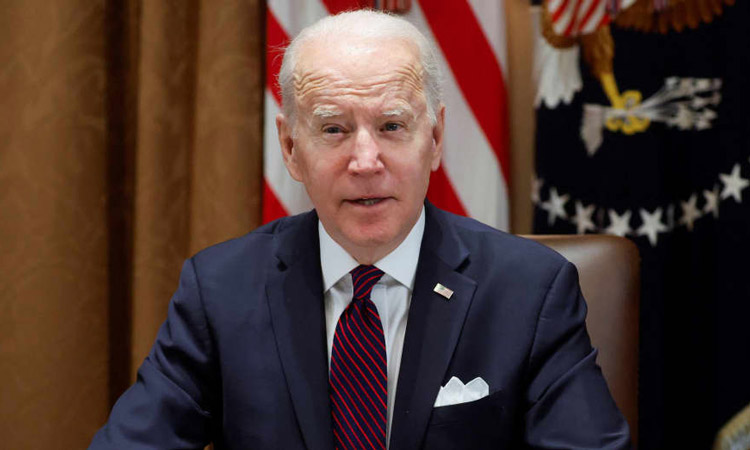 THE PRESIDENT:  Do you guys have any questions?  I know you never have questions.

Q    Do you mind — this morning you had — it seems like you spent a lot of time with your national security team at the White House.  Are there any updates on Ukraine, Mr. President?

THE PRESIDENT:  No, no updates, except that there has been no change in the posture of the Russian forces.  There have — and now they are — as you know, they’re along the entire Belarus border.

And I have made it clear to — early on to President Putin that if he were to move into Ukraine, that there’d be severe consequences, including significant economic sanctions, as well as I’d feel obliged to beef up our presence — NATO’s presence in — on the eastern front: Poland, Romania, et cetera.

And so — so — but I see — I was watching one of you on television pointing out the fact that — and I think you got it right, whoever it was — I’m embarrassed I don’t remember who — saying that this is all Putin.  I don’t think even his people know for certain what he’s going to do.

Q    Would you ever see yourself personally sanctioning him if he did invade Ukraine?

THE PRESIDENT:  I would see that.

Q    What would it take to trigger the deployment of the 8,500 troops that you’ve put on high alert?  And what’s your message to those forces that are on high alert?

THE PRESIDENT:  Those forces on high alert are — they’re part of a NATO operation, not a sole U.S. operation.

And I’ve spoken with every one of our NATO Allies in person — not “in person,” virtually — and we’re all on the same page.

We’ve got to make it clear that — that there’s no reason for anyone — any member of NATO to worry whether or not we would — we, NATO — would come to their defense.

Q    Can we — may I ask you about what — when you’ll make a decision about deploying those troops?  What will —

THE PRESIDENT:  Well, it depends.

THE PRESIDENT:  What would lead to that is what’s going to happen — what Putin does or doesn’t do.

And I may be moving some of those troops in the nearer term, just because it takes time.

And, again, it’s not provocative.  It’s just exactly what I said: is that — is that as long as we have to reassure — if you noticed, you don’t see a lot of concern in terms of their security of our — and of our — our NATO Allies in Western Europe.  But in Eastern Europe, there’s reason for concern.  They’re along the Russian border.  They’re on the Belarus border.  So, everyone from Poland on has — has reason to be concerned about what would happen and what spillover effects could occur.

We have no intention of putting American forces or NATO forces in Ukraine.  But we — as I said, there are going to be serious economic consequences if he moves.

Q    Can you tell me whether you think, sir, that the risk of an invasion is increasing or decreasing, or steady just as it has been in these recent days?

THE PRESIDENT:  You know, I’ll be completely honest with you: It’s a little bit like reading tea leaves.  Ordinarily, if it were a different leader — the fact that he continues to build forces along Ukraine’s border from Belarus all the way around — you’d say, “Well, that means that he is looking like he’s going to do something.”

But then you look at what his past behavior is and what everyone is saying in his team, as well as everyone else, as to what is likely to happen: It all comes down to his — his decision.

Q    Just to be clear, you say — Mr. President, more than economic consequences or geopolitical consequences, could there be military consequences?

THE PRESIDENT:  There is not going to be any American forces moving into Ukraine.