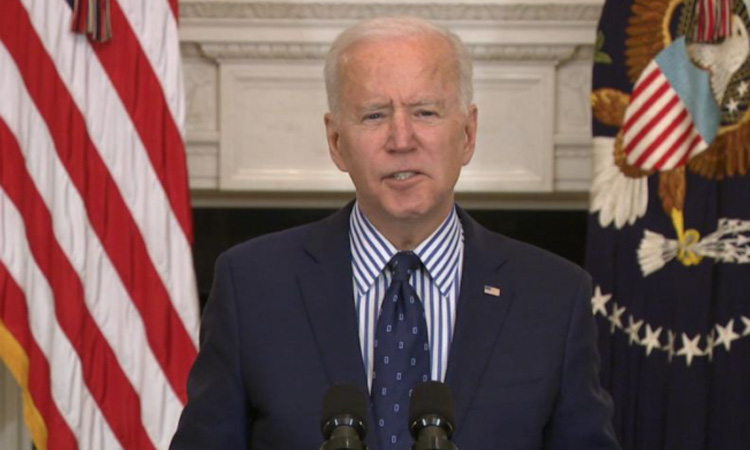 THE PRESIDENT:  Thank you, Madam Vice President, and thank you, Mr. Secretary.

On Friday, I submitted to the Senate for confirmation my first slate of nominations for four-star command positions in our Armed Forces — among them, two outstanding and eminently qualified warriors and patriots.  General Jacqueline Van Ovost in the United States Air Force is currently the only female four-star officer serving in our military.  I nominated her as Commander of the United States Transportation Command.

And when confirmed, the Lieutenant General Laura Richardson, of the United States Army, will be promoted in rank and join General Van Ovost as the only four-star — as another four-star general.  I nominated her as Commander in the United States Southern Command.

And, when confirmed, they will become the second and third women in the history of the United States Armed Forces to lead combatant commands.

Each of these women have led careers demonstrating incomparable skill, integrity, and duty to country.  And at every step, they’ve also helped push open the doors of opportunity to women in our military — blazing the trail a little wider, a little brighter for all the proud women following in their path and looking to their example.

Today is International Women’s Day.  And we all need to see and to recognize the barrier-breaking accomplishments of these women.  We need the young women just beginning their careers in the military service to see it and know that no door will be closed to them.  We need women and men throughout the ranks to see and celebrate women’s accomplishments and leadership in the services.  We need little girls and boys both, who have grown up dreaming of serving for their country, to know this is what generals in the United States Armed Forces look like.  This is what Vice Presidents of United States look like.

So I’d like to spend just a few minutes today making sure that America knows who General Van Ovost is and Lieutenant General Richardson is.  They’re aviators.  Both learned to fly planes before they were old enough to drive a car.

General Van Ovost, a first-generation — is a first-generation American: the daughter of Dutch immigrants who owned a flying operation.  She loved the freedom of flight and, as a teenager, flew herself to see Sally Ride lift off as the first woman in space.  Sixteen years old, goes down to see Sally Ride.  She said she was at several thousand feet watching from a distance.

You know, women weren’t — were banned from flying combat missions when the General joined the force, so she focused on becoming a test pilot.  And instead of learning to fly just one plane, she learned to fly everything, including Air Force Two when I was Vice President.

General Van Ovost currently is — oversees Air Mobility Command: approximately 107,000 airmen and 1,100 planes that enable America’s air power and humanitarian assistance to go everywhere in the world it need be.  From flying water to Texans after the recent storms, to ensuring our wounded warriors are evacuated for medical care from anywhere in the world, she gets it done.

When Lieutenant General Richardson joined the Army Aviation Branch, women were banned from flying attack helicopters.  She flew to — in support of combatant — combat missions, and conducting lift operations of her UH-1 — the so-called “Huey” — and the Blackhawks.

Now, as a commanding general of the United States Army North, Lieutenant General Richardson oversees military ground responses here in North America all over — all over the last year.  That’s meant getting military and medical personnel deployed to help in our response to this pandemic.  More than 4,500 military and medical personnel deployed in hospitals across 14 states and the Navajo Nation to treat COVID-19 patients.  It means more than 2,200 medical personnel are working, or soon will be, at vaccination sites in eight states and the United States Virgin Islands.

But best of all — but best of all, they’re not done yet.  Neither of these incredible generals is resting on her laurels or on her stars.  They’re using their voices and actively working to change policies in the military to make it easier and safer for more women not just to join the military, but to stay in the military and to thrive.

I’m incredibly proud that in 2015, under the Obama-Biden administration, we took the final steps to open up all positions in the military to anyone qualified to serve in them.  The women who join today’s military aren’t told “no” when they apply to fly fighter jets or attack helicopters just because of their gender.  They aren’t told “no” when they want to apply to Ranger School or infantry officer basic training.

But they all know that there’s much, much more work to be done to ensure that women’s leadership is recognized  and we have more diverse leaders; we reach the top echelons of command for all who are qualified, including all women — all women; and that all women feel safe and respected in our military — period.

You know, some of — some of it is relatively straightforward work where we’re making good progress designing body armor that fits women properly; tailoring combat uniforms for women; creating maternity flight suits; updating — updating requirements for their hairstyles.

And some of it is going to take — and — you know, an intensity of purpose and mission to really change the culture and habits that cause women to leave the military:

That women are — making sure more diverse candidates are considering — being considered for career-advancing opportunities at every single level.

That women aren’t penalized in their careers for having children.

That women aren’t just token members, but integral parts throughout all branches and all divisions.

And that they can completely, fairly engage in promotion and compete all across the board, including on the — on age and gender neutrality and the physical fitness test.

You know that both members of the — of the military couples can thrive while serving, like Lieutenant General Richardson and her husband, Lieutenant General Richardson, who, I might add, I want to thank you for getting me off a mountain that was about 12- to 14,000 feet up on a goat path when our helicopter went down in a snowstorm.  It’s good to see you, General.  The ride down that mountain was more perilous in a truck than it was in the helicopter, but thank you.

And we have to take on sexual assault and harassment and violence against women in the military.  Sexual assault is a abhorrent and wrong at any time.  And in our military, where so much of unit cohesion is built on trusting your fellow service members to have your back, there’s nothing less than a threat to our national security.

I know Secretary Austin takes this as seriously as Vice President Harris and I do.  That’s why his first memo as Secretary was a directive to take on sexual assault in the military and why he stepped up independent review — he set up an Independent Review Commission on Sexual Assault to make concrete recommendations for changes.

This is going to be an all-hands-on-deck effort under my administration to end the scourge of sexual assault in the military.  And we’re going to be focused on that from the very top.  I know that we can do it.

The U.S. Military has defeated American enemies on land, in air, and at sea, and this is not beyond us.

I want to thank General Van Ovost — Ovost and Lieutenant General Richardson for their exemplary careers and service to our country.  You’re America’s patriotism at its finest: undaunted and absolutely — absolutely able to do anything by any obstacle; determined to open wide and the doors of opportunity; and ready for the next challenge.

It’s my great honor to serve as your Commander-in-Chief.  And I look forward to hearing your active-duty and recommendations of how we will work together to keep the American people safe to meet every challenge in the 21st century.

So I want to thank you both.  And I want to thank Sec- — the former general — I keep calling him “General.”  My — the guy who runs that outfit over there.  I want to make sure we thank the Secretary for all he’s done to try to implement what we’ve just talked about, and for recommending these two women for promotion.

Thank you all.  May God bless you all.  And may God protect our troops.  Thank you.

Q    Mr. President, can you pass voting rights with the Senate filibuster in its current form, do you think?

THE PRESIDENT:  I can talk to you about that later.