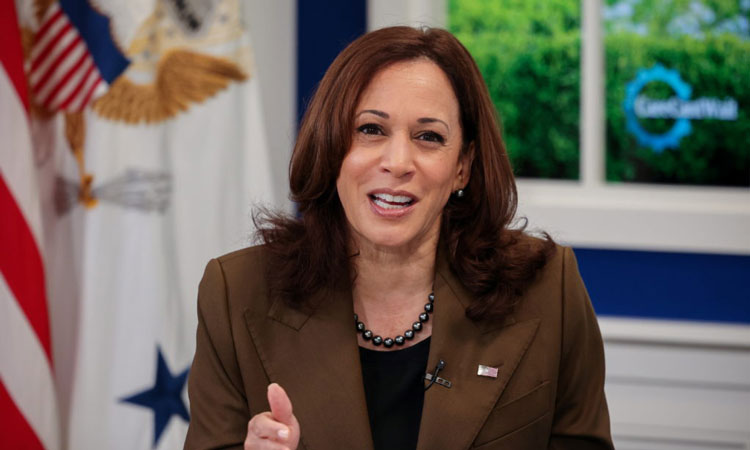 I said to Yendy he — he did an excellent job.  You know, public speaking is very difficult, but you — you hope that, at the end of your presentation, that you not only share something that people may not know and, in that way, teach them, but that you help them to feel something.  And your words caused all of us to feel something about our mutual commitment.  (Applause.)  So thank you for that.  Outstanding.

You know, it is a very challenging time in our country right now on this topic and many others.  And it is good to be back in Miami with all of you and with the leaders who are here — (applause) — on the campus of FIU — (applause) — to discuss a very important topic.

I also want to thank the members of Congress who are here.  We have Congresswoman Frederica Wilson who is here — (applause) — and Congresswoman Sheila Cherfilus-McCormick who is here.  (Applause.)  They were kind enough to meet me on the tarmac as we arrived this afternoon, so thank you.

And I also want to thank the local officials who are here, including the Mayor of Miami Beach, Dan Gelber.  (Applause.)

So, for years, our nation and many of us have discussed, have lamented, have talked about the threat of climate change.  For years, we debated the potential impact that climate change could have on our communities, on our country, and our world.

And today we know the impact, if folks weren’t clear about it before.  Just watch the evening news and see that the time for debate is long past.  (Applause.)

Climate change has become a climate crisis.  And a threat
has now become a reality.

In recent days, deadly floods have swept through Missouri and Kentucky, washing away entire neighborhoods, leaving at least 35 dead including babies, children.  As has been reported, four children from one family.

In the West, an historic megadrought has made access to clean water increasingly uncertain.

In my home state of California, wildfires burned more than 2.5 million acres last year alone.  Andy I were talking about it; my brother-in-law is a firefighter.  And I thank you for giving praise to all of those who have dedicated their lives to that work.

Devastating — it has been devastating what we are witnessing — to so many families and so many communities.

And over the past few days in California, the McKinney Fire
has left two dead and forced thousands in California to evacuate their homes.

And here in Florida, every year, more and more powerful hurricanes and tropical storms make landfall on the coast.

In addition, across our nation, heat waves have forced tens of millions of people to endure record-setting temperatures.

Last year, our nation experienced a total of 20 climate-driven extreme weather events, which caused — each caused more than $1 billion in damage — each one — and, more importantly, resulted in the death of about 700 people.

Earlier today, at the National Hurricane Center, I received a briefing on extreme weather fueled by climate change.

So, to protect the people of our nation, let us understand that we can match that desire with action and that we must act now.

And I — and I can tell you, President Joe Biden and I, we understand that when disaster strikes anywhere in America, we have a duty to act, and — I think we all know here — we all, as leaders, certainly have the capacity to act.

To provide support and resources has been a goal and a priority for our community but for our administration, so that we can respond and recover and rebuild when disaster hits certain communities.

Today, our administration is investing more than $1 billion through FEMA to fund climate resilient [resilience] projects in 343 cities, towns, and counties around our nation.  (Applause.)

And here’s how it works: So, local governments apply for these grants.  They tell us which projects would be most impactful.  And together, then, we build those projects.

For example, our administration is partnering with Kern County, in California, to invest in underground water storage so families can have access to clean water during droughts.

Together, we will invest $50 million to protect low-lying neighborhoods from sea-level rise and storm surge.  (Applause.)

All of these projects will create good jobs and good union jobs in our communities.  (Applause.)

And these projects will also strengthen our economy by preventing billions of dollars of damage from extreme weather.  This $1 billion investment is double what our administration did last year.  And as President Biden recently announced, next year we will be doubling that investment once again to more than $2 billion.  (Applause.)

In awarding these grants, we have paid special attention to the issue of equity, something that has been an area of focus for our administration from the beginning.  (Applause.)

We know that the impact of the climate crisis is not felt equally across all communities.  Consider: Heat waves pose a greater threat to people who don’t have air conditioning or who work in high-heat workplaces, such as warehouses or farm fields.

And low-income communities, including rural communities, often do not have the resources that are needed to invest in resilience or to rebuild after disaster has struck.  The climate crisis has exposed and intensified generations of economic and environmental inequities that have been present in communities across our nation.  And our administration remains committed to addressing those inequities through environmental justice.  (Applause.)

In awarding these grants, we have prioritized projects that will protect the communities that are disproportionately impacted by the climate crisis.  And these investments are one part of a larger fight.

The most effective way to protect our nation is not only to address the effects of climate disasters, but to address the cause of the climate crisis itself.  (Applause.)

Think about it: The transportation sector is our nation’s single-largest source of greenhouse gas emissions.

So, to address that, we have invested tens of billions of dollars to put more electric vehicles on the road.  (Applause.)

In fact, when I was in the United States Senate, we were able to do the work of saying that we should focus on the issue of electric school buses.  And I was proud to introduce the first piece of legislation to electrify our nation’s fleet of school buses to that end.  (Applause.)

And the transition is now underway.  For example, in Miami-Dade County, public schools will soon have 50 electric school buses on the roads.  (Applause.)

And that is not all.  Our administration has also invested $65 billion into the electric grid and transmission infrastructure for our nation — so to build thousands of miles of new, resilient transmission lines.  And in that way, we can move clean energy from where it is created to where it is needed.  It is literally about the transportation of energy.

So, these investments are an important step forward.  And our nation will soon take another great step forward in our fight against the climate crisis.

In addition to lowering the cost of healthcare and prescription drugs for millions of Americans, this agreement will invest nearly $370 billion in clean energy, zero-emission vehicles, environmental justice, and more.

This is an historic opportunity to advance our fight against the climate crisis.

And so, Congress, we ask that you pass it immediately.  (Applause.)

So, all of this to say: The climate crisis is here.  It has arrived, and we are experiencing it in real time.  And we have the ability — dare I say the responsibility — to take urgent action to protect the people of our nation.  And, again, we all have a role to play.

So, Miami, I know that you know the urgency of this moment.  You are living it every day.  And your voice is so important on this issue.

If we act now and we act together, we can protect our communities from the disasters that we are witnessing.  We can tackle the climate crisis and make sure all people can breathe clean air, drink clean water, and have access to clean energy.

So, to the leaders here, I say: Miami, together we are building that future.  And we will not tire in spite of all that we are witnessing that shows us such tragedy.  I know that while we send our prayers and our love, we also, with each day, renew our commitment to the urgency of now and the ability that we have collectively — all of us in it together — to do something about it.