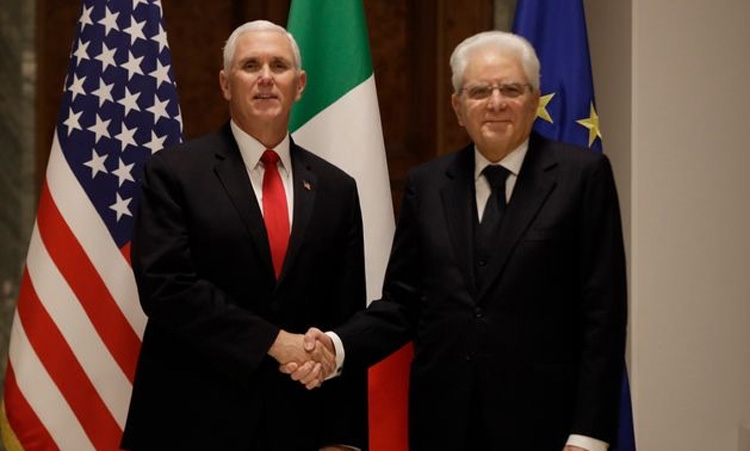 VICE PRESIDENT PENCE:  Well, thank you, President Mattarella.  Thank you for your warm hospitality.  Thank you for welcoming me here in my very first visit to the Italian Republic as Vice President of the United States.  And let me also say: It was a privilege to be in Jerusalem with you yesterday, as we marked the 75th anniversary of the liberation of Auschwitz.  And I thank you for your strong leadership and your presence there.

As you said, Mr. President, the United States and Italy share a special bond going back generations.  In 1861, we recognized the United Kingdom of Italy.  At the turn of the 20th century, we welcomed millions of Italians to our shores.  And I can personally attest that America is home to more than 20 million proud Italian Americans, one of whom is my father-in-law.

And Italian Americans have made such an immense contribution to our nation, but they also represent — they represent the fiber and the strength of the relationship between our two countries in very unique ways.

Our trading relationship is robust.  Our security relationship is robust.  I especially want to thank you, Mr. President, for Italy’s role as one of America’s most important security partners.  Thirty thousand U.S. military and civilian personnel serve here in Italy.  It is the second-largest deployment for the United States in Europe.  And as a NATO partner and an ally, we are grateful for the hospitality of our — our forces, and the partnership for our shared security.

I look forward to talking about issues of common interest — how we can continue to grow the economic bonds between our two countries.  But as President Trump told you when you visited not long ago, the bonds between Italy and the United States have never been stronger.  That is a credit to President Trump’s leadership.  It’s a credit to your leadership, Mr. President.  And I look — I’m looking forward to discussing ways that we can — we can strengthen our ties for our mutual prosperity and security.

And thank you for the warm welcome.