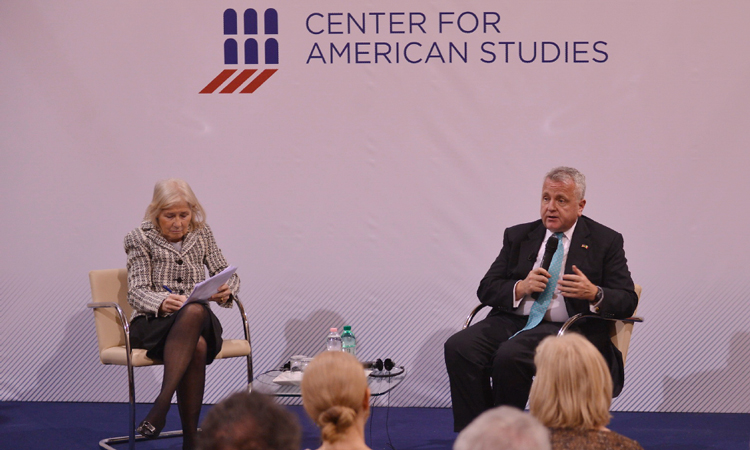 GIANNI DE GENNARO, PRESIDENT OF CSA:  Good evening. Distinguished guests, ladies and gentlemen, dear all, as the President of this Center let me say welcome to everybody, and particularly to our special guest John Sullivan, the Deputy Secretary of State of the United States.

It’s a great pleasure for our institute to host this event because we have the opportunity to know from such an important figure of the U.S. Administration his point of view over many international hot dossiers [such] as Ukraine, North Africa and Middle East. Although our countries share a lot of common values and are strong allies in foreign policy and defense as well, it’s however important from my point of view to discuss such delicate and current international issues.

Faced with a global and diversified threat and paying attention to the request of its citizens to improve their level of security, Europe is moving with growing determination to implement a common defense system. The European military organization and the defense industries are preparing themselves to unify their resources following the political choices of their respective governments. Italy will play a leading role in this next scenario and for this reason we are very proud to be able to offer tonight the opportunity to discuss those matters with John Sullivan in a special place as the Center for American Studies, where is possible to spread our culture and to share our vision of the future.

The Center for American Studies has a long experience and a consolidated tradition in handling this kind of job. I would like to remember and to underline that this year we are going to celebrate the first century anniversary of our library, [which] is one of the largest in Europe for American Studies. After one hundred years we are still committed [to] promoting and developing the relationship with the U.S. in a framework of traditional friendship.

Our first effort is to talk with the young generations, to engage public institutions, to interest the private sector. Our goals, Mr. Sullivan, are realized thanks to the strong cooperation with the American Embassy in Rome, we are particularly grateful to the U.S. Mission, to the Ambassador and to our friend Kelly Degnan, the Deputy, she is very close to us. Thank you Kelly, and thank you even to your staff. Now I’d like to leave the floor to Mr. Sullivan, and thank you again to be here with us tonight.

DEPUTY SECRETARY SULLIVAN:  Thank you, Mr. President, it’s a great honor to be here tonight at the Center for American Studies. I’ve heard so much about it for so long, it’s taken me too long to get here to actually see it for myself and to meet all of you and speak with you, but better late than never.

My purpose in coming here to Rome is to reaffirm, as the President said, the importance of the relationship between the United States and Italy. We have millions of my fellow Americans who trace their ancestry to Italy, we have four million or more Americans who visit Italy every year, a million or more Italians who visit the United States every year. Italy is among our ten largest trading partners. I could list all the statistics but you all know them so well. What binds us is our history, our values and our culture. And as I was saying to my colleagues right before I came in here, I know everyone is anticipating the election on March 4. We in the United States will have mid-term elections this November, but no matter what the results of those elections are, no matter which party wins, no matter which party controls our Congress, the relationship between the United States and Italy will always remain strong because of those shared values, our shared history, our shared culture.

The Americans who were sacrificed here during the Second World War, who paid the ultimate sacrifice and who are buried here, that’s a stake, that’s a part of the United States that’s not going anywhere. That history, those values, that culture is what we share. Beyond that, we have many, many shared interests in our current policies, foreign policies, and I’m happy to discuss those this evening.

And that was the ultimate, overriding purpose of my visit. Secretary Tillerson sent me here to convey that message in Munich and then here, my first stop after Munich, in Rome. Let me briefly touch on some of the issues that I’ve been discussing with my interlocutors in the Italian government, where we have some mutual concerns, and then I’d like to turn it over to questions for the audience and have more of dialogue rather than my just speaking at you.

Starting with what I know is a very important concern for the Italian government, which is Libya. The United States and Italy are committed to a political solution to the serious problems that we see in Libya; problems that resulted in the migration crisis that the Italian government has done so much to stop and alleviate: [it has] been a leader in that. We in the United States are committed to the mission of the UN Secretary General’s special representative Mr. Salamé to forge a political solution to the political and security and immigration problems that we see in Libya. There’s obviously a military component, a counter-terrorism component, to our mission there, but ultimately for success, there must be a political solution.

Moving a little further south to the Sahel, my trip here this week will conclude in Brussels at the donor conference for the Sahel G5, a force which the United States very firmly supports. And of course Italy is very committed to the security mission, [it’s] going to increase its support to Niger and the counter-terrorism mission in the Sahel and the broader region, and [for] economic and political development as well.

Again, the United States and Italy are in close alignment in our policies. We confront a very dangerous and unsettled situation in Ukraine. We are committed to supporting the Ukrainian government [and] President Poroshenko, we are encouraging reform in Kyiv, but ultimately we support the Ukrainian government and support them in the difficult situation they face with forces in Eastern Ukraine and the Donbass supported by Russia, which are doing grave damage, creating humanitarian crises in Eastern Ukraine, which we are united to stop. Again, the Russian annexation of Crimea, which has resulted in sanctions being imposed — and we are committed to maintaining those sanctions and to implementing the Minsk agreement and reaching a political solution that recognizes the sovereignty of Ukraine and the impermissibility of using violence to force political change.

One more area that I will mention – a couple of more areas – first, Lebanon. The Italian government’s hard work and support of the government in Lebanon, [its] troop commitment to the UNIFIL mission of a thousand Italian personnel, is extremely important to peace, in developing a peaceful resolution of the political situation in Lebanon, which as you know is quite fraught. Moving further east, [to the] support from the Italian government for our mission in Iraq; Italy is the second largest contributor of troops to the counter-ISIS mission in Iraq. Similarly in Afghanistan, [there is] great support from the Italian government, commitment of troops and resources to our Resolute Support mission in Afghanistan.

And finally, the global problem that we confront in North Korea. The development by the DPRK of a nuclear weapon tested six times and of an intercontinental ballistic missile system to deliver that weapon is a global nuclear proliferation concern. It’s not a problem just for the United States or just for South Korea or Japan, it’s a global proliferation concern and we’re most grateful for the support of Italy in firmly implementing the UN Security Council resolutions designed to apply maximum pressure to the regime in Pyongyang, and that support – including the recent decision by the Italian government to decline accreditation to a North Korean diplomat – is very important in keeping the pressure on North Korea so that we address that nuclear proliferation concern.

That’s a brief highlight of some of the issues that I’ve been discussing with our friends and partners here in Rome, and with that overview and my thanks for your welcome here to have this discussion, I’d like to open the dialogue and talk about issues that are of interest to you. 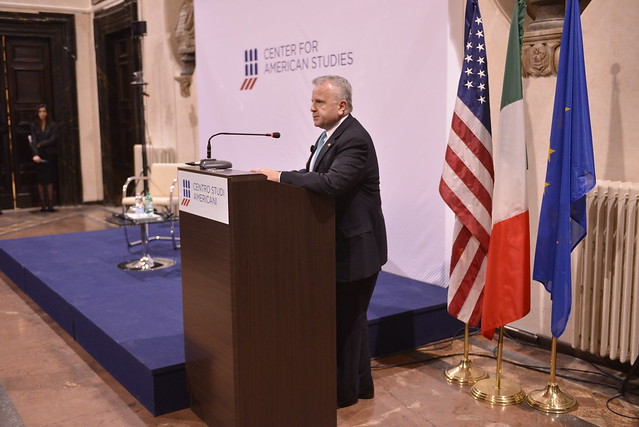