Home Homepage | News & Events | Remarks by Dr. France A. Córdova at a Joint Press Conference by the LIGO Scientific Collaboration and the Virgo Gravitational-Wave Observatory 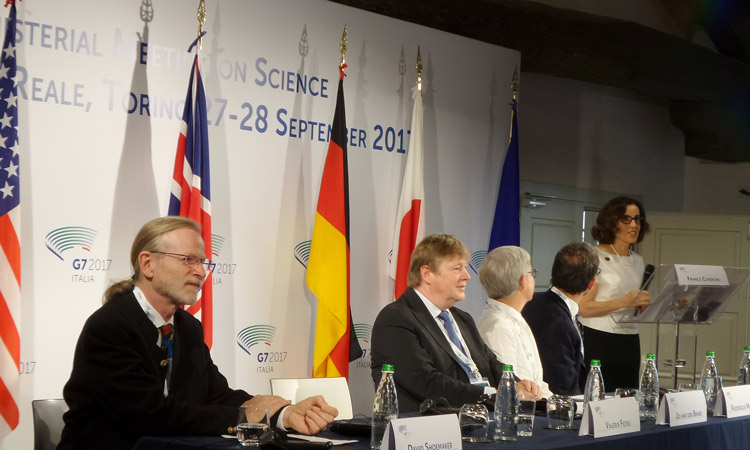 Dr. France Córdova at G7 Ministerial on Science in Turin

Thank you, Director Ferrini, and thank you all for joining us for today’s press conference.

Today marks an exciting milestone in the growing international scientific effort to unlock the extraordinary mysteries of our Universe.

A little more than a year and a half ago, the U.S. National Science Foundation announced that our Laser Gravitational Wave Observatory – or LIGO – had made the first-ever detection of gravitational waves. These gravitational waves resulted from the collision of two black holes in a galaxy a billion light-years away. Since then, LIGO has recorded additional gravitational wave events from other points in the universe.

These series of events have confirmed the potential of Laser Interferometer Gravitational-Wave Observatories and their ability to open an entirely new observational window into the extraordinary phenomena taking place
throughout the universe.

Today, we are delighted to announce the first discovery made in partnership between the Virgo Gravitational-Wave Observatory located here in Italy and the LIGO Scientific Collaboration.

Here are the key milestones of this discovery:

NSF and the LIGO Scientific Collaboration join in congratulating the Virgo scientific team for its partnership in this milestone event and look forward to working jointly on even greater discoveries in the months and years head.