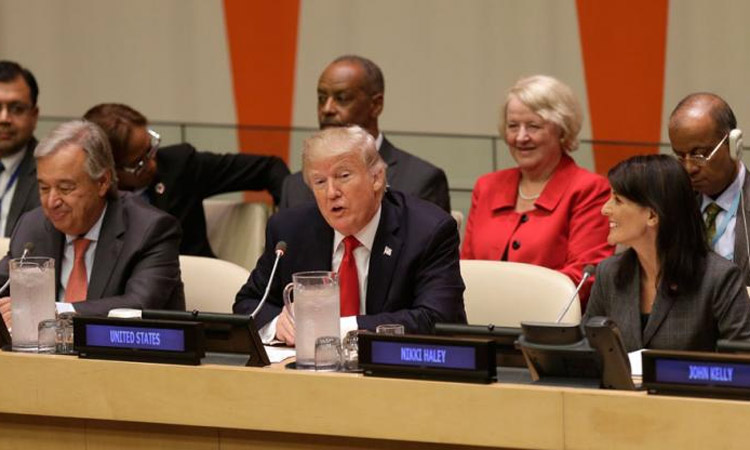 The White House
Office of the Press Secretary
For Immediate Release
September 18, 2017

PRESIDENT TRUMP:  Well, thank you very much.  (Applause.)  Thank you.

I actually saw great potential right across the street, to be honest with you, and it was only for the reason that the United Nations was here that that turned out to be such a successful project.

So I want to thank you, Ambassador Haley, for your introduction and for your steadfast advocacy for American interests on the world stage.

On behalf of the co-host countries, I would like to also thank Secretary General Guterres for — and you have been fantastic — for joining us, and we affirm our commitment to the United Nations reform.  And reform is what we’re talking about.

I applaud the Secretary General for laying out a vision to reform the United Nations so that it better serves the people we all represent.  We support your efforts to look across the entire system and to find ways the United Nations can better, and be better at development, management, peace, and security.

The United Nations was founded on truly noble goals.  These include affirming the dignity and worth of the human person and striving for international peace.  The United Nations has helped advance toward these goals in so many ways:  feeding the hungry, providing disaster relief, and empowering women and girls in many societies all across the world.

Yet in recent years, the United Nations has not reached its full potential because of bureaucracy and mismanagement.  While the United Nations on a regular budget has increased by 140 percent, and its staff has more than doubled since 2000, we are not seeing the results in line with this investment.  But I know that under the Secretary General, that’s changing and it’s changing fast.  And we’ve seen it.

That’s why we commend the Secretary General and his call for the United Nations to focus more on people and less on bureaucracy.  We seek a United Nations that regains the trust of the people around the world.  In order to achieve this, the United Nations must hold every level of management accountable, protect whistle-blowers and focus on results rather than on process.

To honor the people of our nations, we must ensure that no one and no member state shoulders a disproportionate share of the burden, and that’s militarily or financially.  We also ask that every peacekeeping mission have clearly defined goals and metrics for evaluating success.  They deserve to see the value in the United Nations, and it is our job to show it to them.

We encourage the Secretary General to fully use his authority to cut through the bureaucracy, reform outdated systems, and make firm decisions to advance the U.N.’s core mission.  Further, we encourage all member states to look at ways to take bold stands at the United Nations with an eye toward changing business as usual and not being beholden to ways of the past which were not working.

Mr. Secretary General, the United States and the member states present today support this great reform vision.  We pledge to be partners in your work, and I am confident that if we work together and champion truly bold reforms, the United Nations will emerge as a stronger, more effective, more just, and greater force for peace and harmony in the world.

Thank you, Mr. Secretary General.  And I look forward to advancing these shared goals in the years to come, and it is a great honor to be with you today.