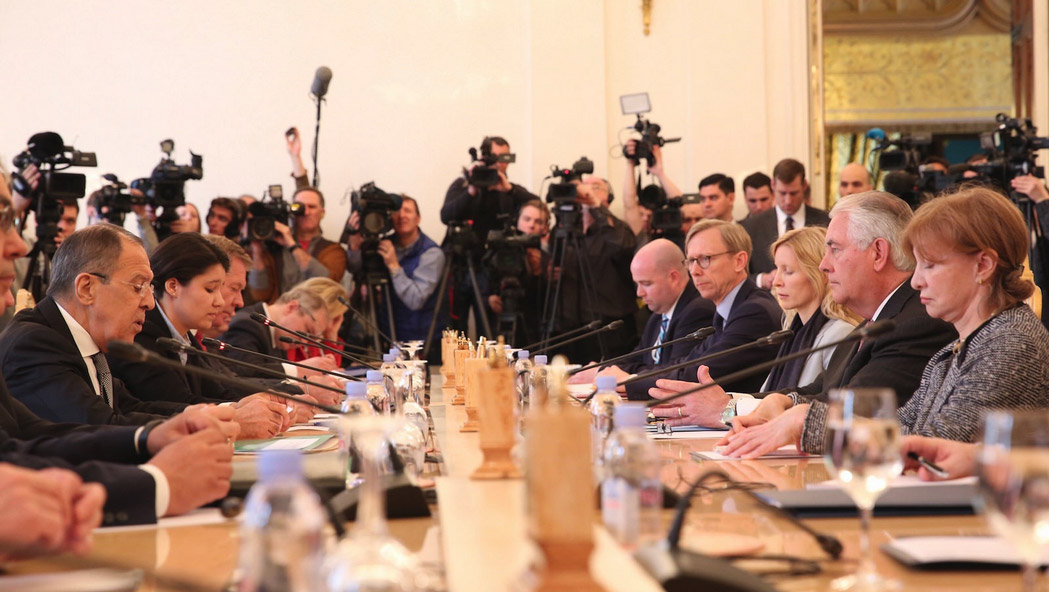 FOREIGN MINISTER LAVROV: (Via translation) Who was bringing you up? Who was giving you your manners?

We met in Bonn on February 16, where I told you about Moscow’s basic views on Russian-US relations and international affairs.

In the few months since then, many statements have been made in Washington regarding current bilateral relations and their prospects, as well as key international issues. Frankly, they have provoked many questions, considering Washington’s confusing and sometimes openly contradictory ideas on the entire range of bilateral and international issues. Moreover, these statements have been issued alongside some alarming actions, notably the illegal attack against Syria. Mr Tillerson, we discussed this in a telephone conversation. President Vladimir Putin and other Russian leaders have expressed their principled position on this issue. We consider it crucially important to prevent a repetition of such actions in the future.

I believe that you have come at the right time. Your visit provides an indispensable opportunity to frankly and honestly discuss the outlook for cooperation on these issues, primarily the creation of a broad counterterrorism coalition, as President Vladimir Putin and President Donald Trump have agreed to do. This is especially important at a time when, as far as we know, not all key positions in the US Department of State have been filled and hence it is not easy to quickly receive clarification on current and future issues. More than once, we have reaffirmed our readiness for a constructive and equal dialogue and cooperation based on respect for the legitimate interests of the other. This has been our consistent policy that is fully in keeping with international law and does not depend on the current political climate or a false choice, such as “you are either with us or against us.”

We have always stood for collective action and we don’t think it is productive to stand behind the closed doors of alliances and “misalliances”. Of course, we have put forth this position to our American colleagues before, and this is well known in Washington and to you, Mr Tillerson. For our part, we need to understand the position of the United States and the practical intentions of the US administration. We hope to move forward on these issues today.

SECRETARY TILLERSON: Well, thank you very much, Foreign Minister Lavrov, for those opening remarks. This does represent a continuation of our communications and discussions and dialogue that began in Bonn.

We also had telephone conversations since that time, and as we’ve often agreed, our lines of communication shall always remain open.