Home Homepage | News & Events | Joint Statement on Syria by the Foreign Ministers of France, Italy, Germany, the UK, the U.S., and the EU 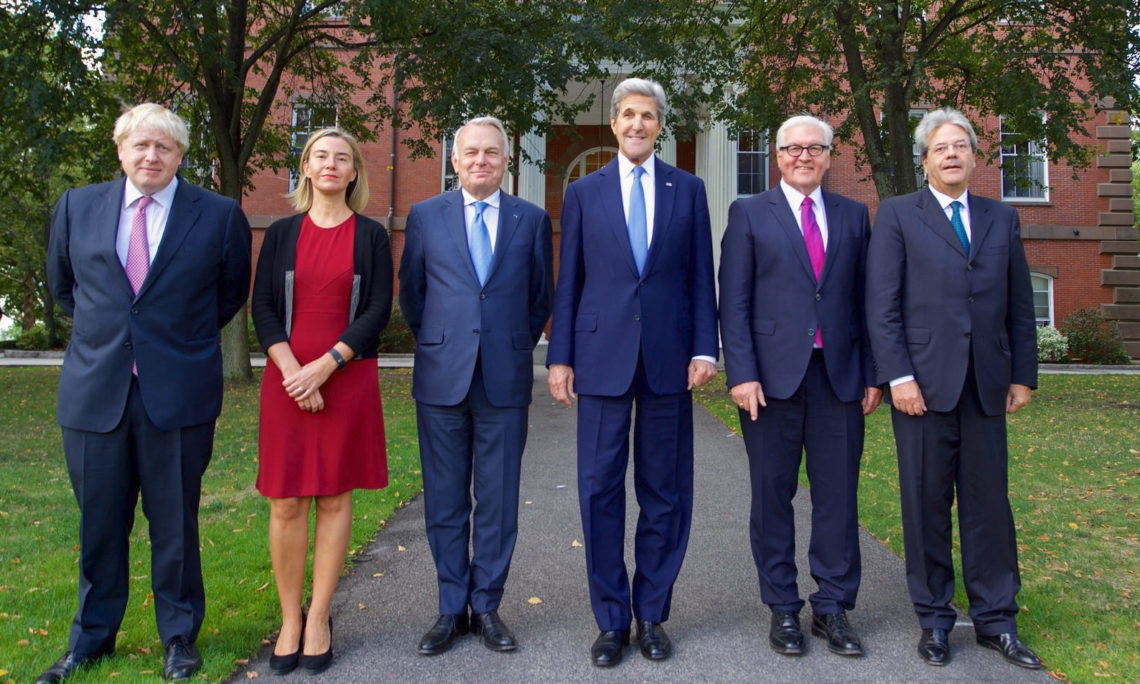 Remarks by SecState Kerry Before Meeting With EU High Representative

Joint Statement on Syria by the Foreign Ministers of France, Italy, Germany, the United Kingdom, the United States, and the High Representative of the European Union

The foreign ministers of France, Italy, Germany, the United Kingdom, the United States and the High Representative of the European Union have released the following joint statement:

The devastating events in Syria this week underscore what we have been saying for some time: the burden is on Russia to prove it is willing and able to take extraordinary steps to salvage diplomatic efforts to restore a cessation of hostilities (CoH), allow unfettered humanitarian assistance and create the conditions necessary for the resumption of UN-led talks about a political transition.

The outrageous bombing of a humanitarian convoy, the Syrian regime’s public denunciation of the CoH, continuing reports that the regime is using chemical weapons, and the unacceptable ongoing regime offensive on eastern Aleppo, supported by Russia, blatantly contradicts Russia’s claim that it supports a diplomatic resolution. The Quint nations and the European Union High Representative therefore call on Russia to take extraordinary steps to restore the credibility of our efforts, including by halting the indiscriminate bombing by the Syrian regime of its own people, which has continually and egregiously undermined efforts to end this war. We welcome recent proposals made in the International Syria Support Group to enhance monitoring of these efforts.

We reaffirm our commitment to the destruction of Da’esh in Syria and Iraq and urge Russia to follow through on its pledge to actually focus on this group. We also reaffirm our shared view that the Nusra Front, al Qaeda’s affiliate in Syria, is a terrorist organization and an enemy of the international community. Nusra rejects a negotiated political transition and inclusive democratic future for Syria, and we call on all armed groups fighting in Syria to cease any collaboration with Nusra.

We demand immediate, expanded humanitarian access to all areas of Syria, including those on the United Nations’ priority list, and we deplore the delays and obstruction caused primarily by the Syrian regime of humanitarian deliveries to Syrians in desperate need. We fully support the United Nations investigations of the use of chemical weapons in Syria and are resolved to take further action to address it.

Finally, the Quint and the EU High Representative reaffirm calls made in this week’s meetings of the International Syria Support Group for the Co-Chairs to continue their diplomatic consultations on these issues, but also underscore that patience with Russia’s continued inability or unwillingness to adhere to its commitments is not unlimited.‎ We therefore also call on the UN Security Council to take urgent further steps to address the brutality of this conflict, and particularly the assault on Aleppo.

SECRETARY KERRY: Well, good morning everybody, and welcome. Welcome to Tufts University, welcome to the Fletcher School of Law and Diplomacy, and welcome especially to greater Boston and to Massachusetts. I am personally particularly grateful to everybody after an extremely busy and intense week in New York to be able to come up here so that we can come together in order to talk quietly and digest, in a way, much of what we talked about during the week and have a little more time to pull thoughts together.

It’s a pleasure for me to be able to have you all come and share a beautiful fall day in Boston. We’ll get a little chance to have some New England cuisine and get out on the harbor later and continue the conversations.

I might emphasize that this is a place that has had longstanding ties to Europe, obviously. And leaving aside sort of the earliest days of history here, which everybody is more than familiar with, the fact is that the last century was defined by the cooperation between most of the countries at this table and the direction that we took – and particularly the post-Cold War period, where we defined the United Nations, succeeded in ending the Cold War in a way that we felt it should end. And now we’re in a new moment of great experience, obviously.

Every one of you has had ties here and engagements here, and we really appreciate your taking this moment to come and work through particularly Syria, Ukraine, Russia, the challenges of counter violent extremism, the work we need to do to bring the climate agreement into force, and the great challenge of so many people and young people around the world who are desperately in need of opportunity, of jobs, of education, of a future.

So we have our work cut out for us. I think every single one of the countries here has a remarkable record in this last quarter-century of being at the forefront of common sense and reasonableness. And frankly, we share a set of values that you just cannot underestimate in terms of the leverage that that has and the force that it has when we come together to coordinate our activities.

So let me say that we will also talk today about Iran and the implementation of the Iran agreement, and we will also have a chance to share thoughts about the economic dynamics going forward, particularly as we navigate through the shoals of Brexit and try to keep Europe as strong and united as possible, and make sure that the United Kingdom is in a position to in fact fully deliver on its intention to be even more of a force in the context of these kinds of challenges that we face.

One thing I think all of us join in saying – and I want to make this clear – what is happening in Aleppo today is unacceptable. It is beyond the pale. If people are serious about wanting a peaceful outcome to this war, then they should cease and desist bombing innocent women and children, cease cutting off water and laying siege in medieval terms to an entire community, and work with the international community in order to be able to bring peace to people who are starving – literally starving, but also starving for the possibilities of a future without chlorine dropping on them out of the sky, barrel bombs, and indiscriminate bombing. And Russia needs to set an example, not a precedent – an unacceptable precedent, I might add, for the entire world.

I know we will as a group have more to say about this later today, so I’ll leave it at that. But we also stand absolutely united for a democratic Ukraine, another place where we call on Russia to cooperate and to move forward with a peaceful resolution.

So we have a lot to discuss; I’m not going to go on. I just want to thank everybody for coming out to share the opening of this session, and I thank particularly my colleagues for being here to take part in it. Thank you all.