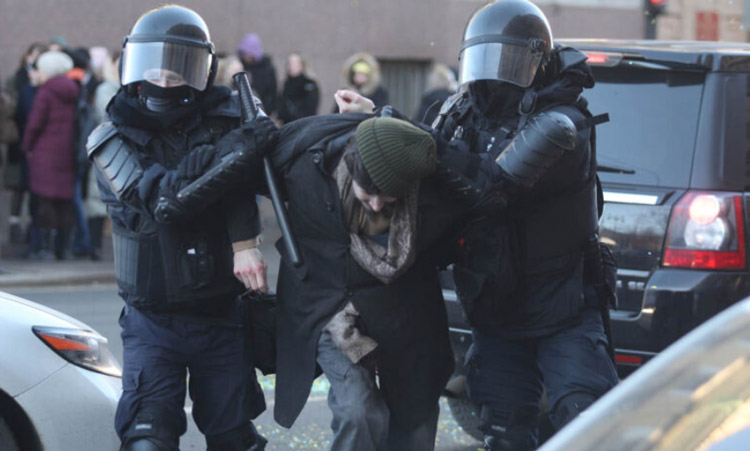 Thousands of Russians in more than 140 cities across the country are risking their liberty to peacefully protest Russian President Vladimir Putin’s unprovoked war on Ukraine.

More than 13,000 protesters have been detained in Russia since the invasion began February 24, according to OVD-Info, a rights group that tracks political arrests. Yet brave Russian citizens continue to demonstrate, even as Putin’s authoritarian regime cracks down on all forms of dissent.

On March 4, Russia’s government enacted two laws making factual war reporting and anti-war protests punishable by 15 years in prison. While one of the laws purports to ban “fake news” about Russia’s military, observers say the new restrictions essentially criminalize accurate reporting and criticism of the war against Ukraine.

“These new laws are part of Russia’s ruthless effort to suppress all dissent and make sure the population does not have access to any information that contradicts the Kremlin’s narrative about the invasion of Ukraine,” Hugh Williamson of Human Rights Watch said March 7.

More than 1 million people have signed a Russian-language petition calling for the end of the war on Change.org, according to a spokeswoman for the website headquartered in San Francisco.

Prominent Russian citizens have also spoken out against Putin’s war, and professional organizations and human rights advocates in Russia are also calling for peace.

In a February 25 letter, more than 17,000 doctors, nurses and paramedics in Russia opposed the government’s invasion of Ukraine and condemned ongoing violence.

Groups of scientists, journalists, information technology specialists, teachers and artists have also signed open letters and public petitions opposing the invasion of Ukraine, garnering thousands of signatures from their fellow professionals, according to news reports.

Russian scientists and science journalists “declare our strong opposition to the Russian hostilities launched against the Ukrainian people,” the scientists’ February 26 letter says. “We demand respect for the sovereignty and territorial integrity of the Ukrainian state.”