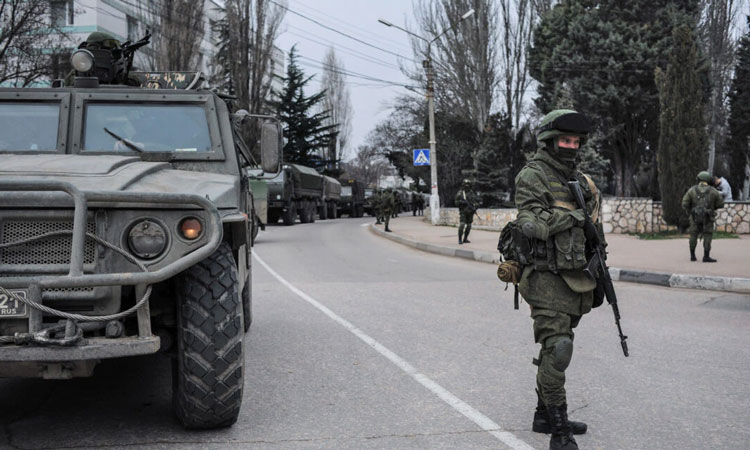 Troops in unmarked uniforms stand next to a convoy that includes a vehicle with an emblem and number plates identifying it as belonging to Russia's military, in Balaklava on the outskirts of Sevastopol, Ukraine, on March 1, 2014. (© Andrew Lubimov/AP Images)

Russian President Vladimir Putin’s attempts to annex Ukrainian territories under the guise of protecting Russian speakers living in those areas are strikingly familiar.

Moscow has been rolling out the same playbook it used in 2014 when Russia invaded Crimea and forcibly seized parts of eastern Ukraine.

As it did in 2014 in Crimea, Russia installed pro-Putin officials in key municipal and regional roles in the four regions in Ukraine where Russia’s forces have taken partial control: the Donetsk and Luhansk provinces, known collectively as the Donbas region, and in the eastern provinces of Kherson and Zaporizhzhya.

But the referendums were anything but free and fair. Russia had installed officials loyal to Putin to oversee the elections, and Ukrainian civilians were forced to cast ballots under the watch of armed guards. The world widely condemned Moscow’s actions.

Moscow’s playbook goes back farther than Crimea in 2014.

The Kremlin has used similar tactics to reestablish influence in neighboring territories that had been part of the Soviet Union.

Although Moldova gained independence from the Soviet Union in 1991, some 1,500 Russian forces have been stationed on Moldovan territory in the breakaway region of Transnistria since 1992. That was the year of a cease-fire between the Moldovan government and residents of the region who said they wanted to separate from Moldova and keep closer ties to Moscow.

Russian-speaking people in Transnistria had opposed many of the Moldovan government’s actions, including making Romanian the country’s official language. Russia’s military intervened on behalf of the Transnistrian side and have been there ever since.

“Transnistria’s de facto independence prevents Moldova from joining Western alliance structures and keeps it in Russia’s sphere of influence,” Will Baumgardner of the American Enterprise Institute think tank in Washington wrote in September.

Russia had falsely accused the Georgian government of committing grave crimes against citizens Moscow said were Russians living in Georgia’s South Ossetia region. Moscow said it was intervening to prevent genocide. Russia used the same line of reasoning in Ukraine.

Russia and Georgia signed a cease-fire agreement later in August 2008, at which time Moscow said it would pull back its troops from most occupied Georgian territory. That never happened.

Instead, Russia recognized the so-called independence of Abkhazia and South Ossetia. Russia’s military forces remain in those Georgian regions today.

“The August 2008 invasion of Georgia was a Beta test for future aggression against Russia’s neighbors and a dry run for the tactics and strategies that would later be deployed in the 2014 invasion of Ukraine,” Brian Whitmore of the Atlantic Council wrote in August 2021.

Russia’s military has a history of atrocities, killing and wounding civilians in Georgia in 2008, Crimea and eastern Ukraine in 2014, and throughout Ukraine since the February 24 invasion.

The United Nations does not recognize Transnistria, Abkhazia or South Ossetia as independent countries; neither do most countries, including the United States. Likewise, governments worldwide do not recognize Russia’s attempted annexation of Ukrainian territory.