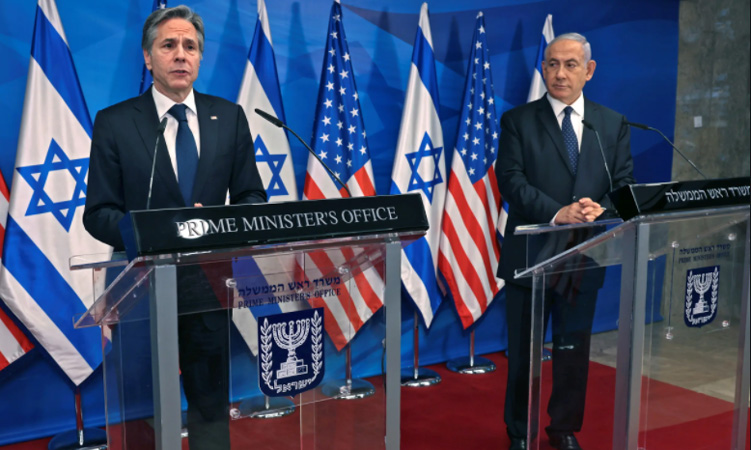 PRIME MININSTER NETANYAHU:  Secretary Blinken, Tony, welcome to Jerusalem, your first visit as the Secretary of State.  I have – since we’re running – we had a long discussion, and we’re running late, so I want to be very brief and speak about three points.

The first point is a vote of thanks to President Biden and you for firmly supporting Israel’s right of self-defense.  I have to say that Secretary Blinken, in a previous capacity in 2014, when we had another round of engagement against Hamas aggression, supported us by having Iron Dome replenishments, a quarter of a billion dollars, that you personally shepherded through the system very quickly.  And we remember it and we’re very grateful to you.  And you are giving meaning to this now again with replenishments of Iron Dome interceptors that saved civilian lives on both sides, and we’re grateful for that too.  We too will give meaning to our commitment to our self-defense.  If Hamas breaks the calm and attacks Israel, our response will be very powerful.  And we have discussed ways of how to work together to prevent Hamas rearmament with weapons and means of aggression.

The second point is – naturally, is Iran.  We discussed many regional issues, but none is greater than Iran.  And I can tell you that I hope that the United States will not go back to the old JCPOA because we believe that that deal paves the way for Iran to have an arsenal of nuclear weapons with international legitimacy.  We also reiterated that whatever happens, Israel will always reserve the right to defend itself against a regime committed to our destruction, committed to getting the weapons of mass destruction for that end.

The third point is peace.  We need to work together to expand normalization between Israel and the Arab and the Muslim world, and deepen the peace treaties that we already have.  We discussed also how to improve the lives and the conditions of the Palestinians, the humanitarian conditions in Gaza, including the question of the return of our MIAs and two civilians who are there, as well as building economic growth for Judea and Samaria, the West Bank, with international cooperation and participation, and for peace itself with the Palestinians, a formal peace.  I think President Biden was absolutely correct when he said you’re not going to get peace until Israel is recognized as an independent Jewish state.  And that is the key.  I couldn’t agree more with President Biden.

And I couldn’t be happier than welcoming you here and your delegation in Jerusalem.  We have a lot to work for.  We have common goals of peace, security, and prosperity, and I look forward to working with you on those in this visit and more, so welcome.  Welcome.

SECRETARY BLINKEN:  Thank you.  Prime Minister, thank you.  Thank you very, very much.  Thank you for hosting us today.  Thank you for the very good and lengthy conversation.  I’m looking forward also to spending some more time with some of our colleagues, with Foreign Minister Ashkenazi, Defense Minister Gantz, as well later with President Abbas and other Palestinian leaders.

President Biden asked me to come here today, really, for four reasons:  First, to demonstrate the commitment of the United States to Israel’s security, to start to work toward greater stability and reduce tensions in the West Bank and Jerusalem, to support urgent humanitarian and reconstruction assistance for Gaza, to benefit the Palestinian people, and to continue to rebuild our relationship with the Palestinian people and the Palestinian Authority.  Intense behind-the-scenes diplomacy led by President Biden, working very closely with the prime minister, helped produce last week’s ceasefire.  Now, we believe we must build on it.

That starts with the recognition that losses on both sides were profound. Casualties are often reduced to numbers but behind every number is an individual human being – a daughter, a son, a father, a mother, a grandparent, a best friend.  And as the Talmud teaches, to lose a life is to lose the whole world, whether that life is Palestinian or Israeli.  I underscored to the prime minister something that President Biden made crystal-clear throughout the violence:  The United States fully supports Israel’s right to defend itself against attacks such as the thousands of rockets fired by Hamas indiscriminately against Israeli civilians.

For the President, I think as many of you know, this commitment is personal.  It runs deep.  He has been one of Israel’s most steadfast supporters for the last 50 years, having worked closely with every prime minister starting with Golda Meir and now with Prime Minister Netanyahu.

As the prime minister mentioned, we had a detailed discussion about Israel’s security needs, including replenishing Iron Dome.  We’ll continue to strengthen all aspects of our longstanding partnership.  And that includes consulting closely with Israel, as we did today, on the ongoing negotiations in Vienna around a potential return to the Iran nuclear agreement, at the same time as we continue to work together to counter Iran’s destabilizing actions in the region.

We know that to prevent a return to violence, we have to use the space created to address a larger set of underlying issues and challenges, and that begins with tackling the grave humanitarian situation in Gaza and starting to rebuild.  The United States will work to rally international support around that effort while also making our own significant contributions, including some that I’ll announce later today.  We’ll work with our partners, closely with all to ensure that Hamas does not benefit from the reconstruction assistance.

At the same time, we need to work to expand opportunity for Palestinians in Gaza and in the West Bank, including by strengthening the private sector, expanding trade and investment, and other means.  Assistance and investment like these will help foster a more stable environment that benefits Palestinians and also benefits Israelis.

Prime Minister and I had a chance to discuss other steps that need to be taken by leaders on both sides to set a better course for their shared future.  As President Biden has said, we believe that Palestinians and Israelis equally deserve to live safely and securely; to enjoy equal measures of freedom, opportunity, and democracy; to be treated with dignity.  We also discussed some of the intercommunal violence that erupted in Israel during the conflict, and healing these wounds will take leadership at every level of society, from elected officials to community leaders to neighbors.  And we very much welcome the statements the prime minister made and members of his government made condemning the attacks regardless of whom they targeted.

In our own country, in the United States, we’ve witnessed a shocking eruption of anti-Semitic attacks.  As President Biden said just yesterday, they are despicable and they must stop.  There’s a lot of hard work ahead to restore hope, respect, and some trust across communities.  But we’ve seen the alternative, and I think that should cause all of us to redouble our efforts to preserve the peace and improve the lives of Israelis and Palestinians alike.

But Prime Minister, again, thank you so much for all the time, thank you for the very, very good conversation, and we look forward to doing a lot of work together.  Thank you.