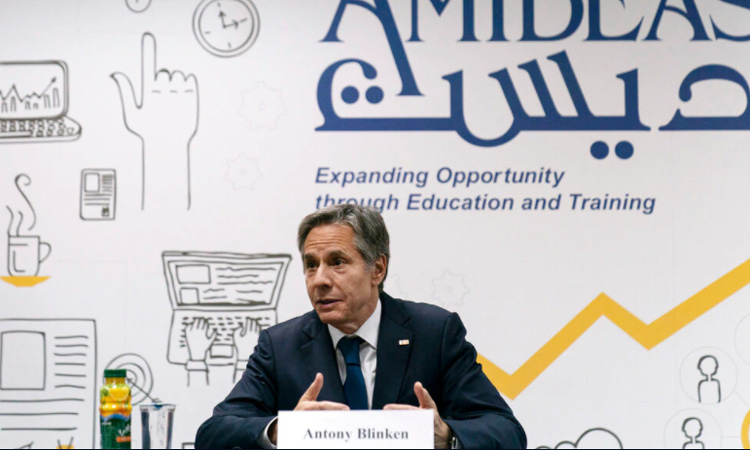 Remarks to the Press
Antony J. Blinken, Secretary of State

PRESIDENT ABBAS:  (Via interpreter)  In the name of God, the merciful and the compassionate, we would like to welcome Secretary Clinton, who visits us these – in these days —

PRESIDENT ABBAS:  (Via interpreter) – sorry – Blinken, who visits us in these days —

PRESIDENT ABBAS:  (Via interpreter) – under very difficult conditions.  And we also would like to thank President Biden and the U.S. administration for their efforts to achieve a ceasefire between the Gaza Strip and Israel, and the efforts that they continue to exert in order to reach a comprehensive ceasefire that will hold.

We would also like to thank the U.S. administration for its support to the state of Palestine and for the resumption of its assistance to us and to the UNRWA.  This is something that we highly value, and we hope that the future will be rife with diplomatic and political effort headed by the U.S. and the Quartet so that we can reach a lasting and comprehensive peace in the region according to international legitimacy resolutions, and so that these actions on the part of a few – of a hurtful few would come to an end.

We have also affirmed that we are committed to peaceful popular resistance and that we renounce violence and terrorism, and we only want to achieve a political solution through peaceful means between us and Israel.

We have also affirmed that our government stands ready to work directly in order for the reconstruction of Gaza and also to establish a national unity government for that end that would be all-inclusive.  And in the event that such agreement materializes, our first condition would be that Hamas and all parties have to abide by international legitimacy resolutions that are known for everyone.

And we also informed the Secretary that we have postponed the elections, because Israel has refused to include Jerusalem in these elections, and the minute that it does we will hold them immediately and without any delay, because ultimately what we’re interested in is to establish democracy throughout Palestine.

Once again, I thank the U.S. administration and President Biden and Secretary Tony Blinken for the efforts that he’s in engaging in now in order to achieve that end.

SECRETARY BLINKEN:  Well, Mr. President, thank you very, very much.  It’s very good to be in Ramallah, or maybe I should say back in Ramallah, to see you, to see the prime minister and your team.

And let me start by conveying the deep condolences of the United States to the families who’ve lost loved ones in the recent violence – the children, the women, the men whose lives were lost.  I say this as a father.  No child, whether Israeli, Palestinian, or American, is a statistic.  We know the human consequences when violence takes the upper hand, and we are determined that that not be the case.  I think the loss of any child is a universe of loss, and in some ways incomprehensible except to those who’ve suffered the loss.  And that’s true irrespective of whether you’re Israeli, Palestinian, American; if you’re a human being, that’s what matters.

We know that the last round of violence is symptomatic of a larger set of issues that we have to address if we’re going to prevent its recurrence, and that’s what we talked about today.  We welcome the ceasefire that continues to hold, but that’s not enough.  We have to build on the ceasefire and try to move things in a genuinely positive direction.  As I told the president, I am here to underscore the commitment of the United States to rebuilding a relationship with the Palestinian Authority and with the Palestinian people, a relationship built on mutual respect and also a shared conviction that Palestinians and Israelis alike deserve equal measures of freedom, security, opportunity, and dignity.

As I told Prime Minister Netanyahu and President Abbas, the United States will be moving forward with the process to reopen our consulate in Jerusalem.  That’s an important way for our country to engage with and provide support to the Palestinian people.  We’re also working in partnership with the United Nations, the international community, the Palestinian Authority, the Palestinian people, the Government of Israel to assist in the relief and recovery efforts in Gaza.  The – this relief is urgent.  We have to respond to the profound need to help people in this moment.

To that end, I informed President Abbas and, earlier, Prime Minister Netanyahu that the United States will notify Congress of our intention to provide $75 million in additional development and economic assistance for the Palestinians in 2021.  We’ll also provide $5.5 million in immediate disaster assistance for Gaza and a little over $32 million for UNRWA’s emergency humanitarian appeal.  This new assistance comes on top of significant support the United States has recently committed and resumed to the Palestinian Authority, the Palestinians, to different agencies and groups.

In total, we are in the process of providing more than $360 million of urgent support for the Palestinian people, and across these efforts, we will work with partners to ensure that Hamas does not benefit from these reconstruction efforts.  Asking the international community, asking all of us to help rebuild Gaza only makes sense if there is confidence that what is rebuilt is not lost again because Hamas decides to launch more rocket attacks in the future.  So this is vitally important.

We also talked a little bit about a challenge that all of us have faced together in the past year, and that is COVID-19.  And we will work in the United States to rally the international community to provide 1.5 million doses of safe, effective COVID-19 vaccines to the Palestinian people.

Beyond the immediate reconstruction and (inaudible), we’re also committed to working with the Palestinian Authority and the international community to promote economic stability and progress in the West Bank and Gaza, more opportunity, to strengthen the private sector, expand trade and investment, all of which are essential to growing opportunity across the board.  We’ll also work with the Palestinian Authority to ensure freedom of expression for all Palestinians and the promotion and protection of civil society.  I very much look forward in a short while to meeting with leaders from Palestinian civil society a little later today.

We will, as the president noted, continue to firmly oppose any unilateral provocative actions that risk sparking more violence and that undermine prospects for a just, durable resolution of the conflict between Palestinians and Israelis, which ultimately requires two states.  And whether that is settlement activity, whether that is home demolitions, annexation of territory, incitement to violence, compensation for individuals imprisoned for acts of terrorism, any unilateral action that undermines the prospects for genuine progress and genuine peace is something we will continue to oppose.

We remain committed to the historic status quo on the Haram al-Sharif.  Palestinians and Muslims from around the world must be able to pray in peace on the Noble Sanctuary, now and eternally.  In Jerusalem and across Israel, Christian and Muslim Palestinian families deserve the same right to worship, build, and thrive as their Jewish cohabitants.

The aspirations of the Palestinian people are like those of people everywhere: to live in freedom; to have their basic rights respected, including the right to choose their own leaders; to live in security; to have equal access to opportunity for themselves, for their children; to be treated with dignity.  And my message today is that the United States is committed, Mr. President, to working with you, to working with the Palestinian people, to realize these aspirations.

Thank you for having us here today.