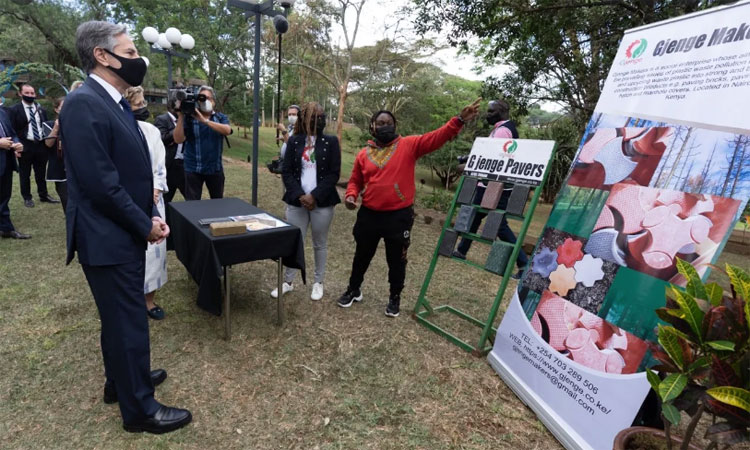 MS ANDERSEN:  Thank you.  I’m very honored to welcome you, Secretary Blinken, to the United Nations in Nairobi.  For almost 50 years – next year it will be 50 – we at the United Nations Environment Program have been proud to call Kenya home to the only UN headquarters located in the Global South, the nerve center of multilateral governance here for the environment.

Secretary Blinken, your presence here today is hugely important.  Your being here demonstrates that the United States wants to be part of multilateral solutions that will keep the environmental action up and running.  We at UNEP have long benefited from strong partnership with the U.S. on environmental law, on reducing pollution, on promoting green economy, on scientific leadership for the environment, and most recently, of course, in Glasgow on methane emissions.

Mr. Secretary, we’ve just concluded the Climate COP in Glasgow, and if there’s one clear takeaway, of course, for us and for the world, it is that we can keep 1.5 alive, we can get there, but it’ll take us all to make it happen.  And as we now sprint towards the United Nations Environment Assembly in February of 2022 that will be held here in this beautiful place, we must recognize that the work that member-states are leading on plastic pollution has the potential to be a turning point.  Meaningful action on pollution will require us to journey beyond our comfort zones, engaging with numerous environmental agreements with business and finance, with cities, with civil society, with entrepreneurs, and with people everywhere.

I’m therefore so pleased to acknowledge here the presence of the remarkable Kenyan entrepreneurs that are proof that action is already underway, and our host country, Kenya, continues to lean in on the transition to clean energy by 2030, on geothermal, on wind power, on household solar, on a successful ban on single-use plastic bags, on green bonds, on climate-resilient agriculture, and so much more.

So Mr. Secretary, UNEP will mark its 50th anniversary next year, and as we seek to work together to address a triple-planetary crisis – the crisis of climate change, the crisis of biodiversity and nature loss, and the crisis of pollution and waste – we have a real opportunity to push full speed ahead towards environmental multilateralism that makes an impact, a positive impact, on people’s lives.  Because as the UN secretary-general has noted, success or failure is not an act of nature; it is in our hands.  Thank you, Mr. Secretary.

SECRETARY BLINKEN:  Well, good morning, everyone, and Executive Director Andersen, thank you so much for your remarkable leadership on this issue, for the work of the entire United Nations Environment Program team at indeed the only UN headquarters in the Global South, and what a headquarters it is.

Inger and I were just in Glasgow for the COP26, and UNEP was a key partner in rallying countries to take the bold, urgent steps necessary to keep warming to 1.5 degrees Celsius and avoid a climate catastrophe.  To give just one example, the independent, rigorous data tracked by the UNEP’s International Methane Emissions Observatory will bring greater transparency to the efforts of more than 100 countries now, led by the European Union and the United States that signed the Global Methane Pledge.  That pledge commits cutting global methane emissions by at least 30 percent by 2030.  That’s just one important example of the steps the international community took at Glasgow.

Many countries, including from Africa, set more ambitious national action plans to cut emissions, and many made significant commitments to invest more in adaptation, particularly in vulnerable countries through initiatives like the Africa Adaptation Initiative and President Biden’s Emergency Plan for Adaptation and Resilience, or PREPARE, as the acronym goes.

Now to come back to methane, if the world’s major methane emitters join us, including China, that would be the equivalent of taking every ship out of the seas and every plane out of the skies in terms of emissions.  At the same time, we still have a lot of work cut out for us.  As Inger pointed out at COP26, we now have to hold ourselves and others to the pledges that we made, and we’ve got to continue pushing for bigger commitments and more action on adaptation and mitigation because no one is under the illusion that we have yet done enough, especially as the damage inflicted by the climate crisis continues to grow as the brutal drought here in Kenya shows very vividly.

So today, we are stepping up and stepping up our efforts to tackle another pollutant that threatens our planet, plastic, by announcing the United States support for multilateral negotiations on a global agreement to combat ocean plastic pollution.  By launching these negotiations at the UN Environmental Assembly in February 2022, our goal is to create a tool that we can use to protect our oceans and all of the life that they sustain from growing global harms of plastic pollution.

It’s crucial that the agreement call on countries to develop and enforce strong national action plans to address this problem at its source.  Many countries, climate and ocean advocates, private companies have supported this effort for some time.  We’re grateful for the serious work that they’ve already put into this effort and look forward to working with them.  The private sector in particular will need to do more to cut plastic pollution and invest in innovation.  We recognize that different actors will have different capacities to act, but every nation, every community, and indeed every individual has a role to play, and let me just say a little bit about why.

It’s estimated that we add between eight and fourteen million tons of plastic pollution to the ocean every single year.  That’s about one truckload dumped in the sea every minute of every day, and that rate is increasing, not decreasing.  Plastic can take anywhere from decades to millions of years to break down.  In that time, waste is carried everywhere from Antarctica to the Marianas Trench.  Some of it is caught in massive swirling sea currents.  The biggest one, the Great Pacific Garbage Patch, is spread across an area three times the size of France.

The negative effects of plastic pollution on sea life and on human beings are serious.  Much of the plastic at sea is broken down into tiny pieces that sea animals eat.  These microplastics can tear apart animals’ organs, clog their intestines, and give them the illusion they’re full, causing them to starve to death.  And because plastics absorb toxins, when we eat seafood, we’re not only consuming microplastics, but toxins as well.  In addition, plastic pollution can hurt small-scale fishing and discourage tourism to coastal areas.

As we know, our health, our survival is bound up in the health of our oceans.  We have to do more to protect them.  Supporting the development of this new agreement is just one way that we’re working to do that, but it comes atop many others.  At the 2019 Our Ocean Conference, the United States announced over 20 new commitments valued at more than $1.2 billion to promote sustainable fisheries, combat marine debris, invest in marine science.  In February, the United States will co-host the next Our Ocean Conference with Palau, where we’ll focus on the link between oceans and climate change and the importance of healthy oceans to the survival of Small Island Developing States.

That connection is at the heart of the SALPIE Initiative that President Biden launched in March to increase U.S. economic cooperation with island countries and territories.  This overarching goal has strong bipartisan support from the United States Congress which passed the landmark 2020 Save Our Seas 2.0 legislation.  As that legislation recognizes, innovation is crucial, and on this, the United States is leading by the power of our example, such as the U.S. Department of Energy’s Plastics Innovation Challenge, which is investing millions of dollars of research in national labs, universities, and industry to make leaps in areas such as developing new plastics that are recyclable by design.

Many of the most promising innovations are coming not from government or industry, but from individuals, including as we’ve just seen here in Kenya.  Indeed, before speaking with you, I had the chance to meet with a pair of very inspiring entrepreneurs.  One was Nzambi Matee, an engineer who, as some of you may have heard, started a company that turns plastic waste into sustainable, affordable bricks that can be used to pave roads.  Her company produces 500 to a thousand bricks every day, recycling 500 kilos of plastic waste using machines they designed here in Nairobi.  The company’s created more than a hundred jobs.

The other day, (inaudible) co-founder of a social enterprise that employs women and youth in Mombasa to model a new form of waste management, has been organizing informal workers, training them to sift out recyclable trash from other waste, and putting that waste to productive and profitable use.

So we face a monumental challenge of protecting our oceans, but if we’re ambitious in both our global and our local efforts, if we can combine the efforts of government and industry with those of communities and individuals, if we empower the innovative approaches that we’ve seen with partners like Nzambi and (inaudible), I’m convinced we can overcome this challenge, we can meet it – we can meet it and we can meet it together.

So it’s wonderful to be here to see the extraordinary work that UNEP is doing here in Kenya, but also around the world.  We’ve got a lot of work to do but we have very strong partners to do it with.  Thank you.  (Applause.)