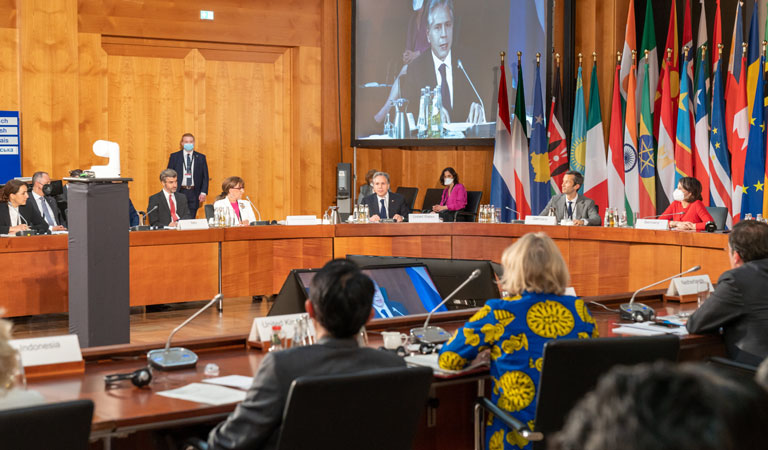 SECRETARY BLINKEN:  Merci beaucoup, Monsieur President.  President Michel, President Sall, Chancellor, thank you all so much for being part of this today.  Let me actually start by inviting another colleague to the stage, President Petro of Colombia.  Would you please join us if you’re here?  And maybe he’s not.  Ah, there we are.  Mr. President.  (Applause.)  Good to see you.

We have a number of co-hosts for this event, including the chancellor, including President Petro, including my friend the foreign minister of Indonesia, Retno, who is here somewhere as well – there – and a number of other colleagues from across the world who are joining forces to address an issue of acute urgency for countries around the world.

At the outset of 2022, conflicts, COVID-19, the effects of the climate crisis had already driven more than 190 million people into acute food insecurity.  According to the World Food Program, President Putin’s brutal war of aggression in Ukraine may add 70 million people on top of that – an already staggering number becoming even more staggering.

In May, I had the opportunity to speak about these issues at the UN Security Council, a meeting that the United States convened on the link between food insecurity and conflict.  We also chaired a Food Security Ministerial here at the United Nations, where we launched one of the initiatives you’ve heard about already, the Roadmap for Global Food Security: A Call to Action.  It calls on member states to take seven actions, which include keeping food and agricultural markets open, increasing fertilizer production, investing in climate-resilient agriculture.

More than 100 countries have signed on to the roadmap; many are already acting on those commitments.  Action is crucial because the current crisis is one that no individual country or even group of countries can solve alone.  And that’s why we’re here together.  The work before us is clear.

First, we have to get emergency aid to the people who need it.  Since February, the United States has provided more than $6.1 billion in humanitarian assistance and $2.3 billion in development aid to combat hunger and strengthen food security.  I’m proud to say that we’re consistently the largest donor to the World Food Program, providing more than half of all contributions.  Some countries with the capacity to do more are among those doing the least.  That needs to change.  And no matter what countries have done so far, every country is called upon to do more.  Tomorrow, the United States will do just that when President Biden announces new assistance from the United States.

Another way that we can support immediate relief is by pushing for an extension of the deal that the United Nations and Turkey brokered between Russia and Ukraine, which has allowed for grain and other agricultural products to be exported from Black Sea ports.  Now, that agreement should never have been necessary in the first place.  The only reason it was is because Russia, having invaded Ukraine, was then blockading its ports and preventing food that had been feeding the world from getting out.

But we had to deal with the reality before us, and the deal that was brokered by the United Nations with Turkey’s assistance actually enabled the grain to start moving again.  And as you heard from my colleagues, despite some of the misinformation that continues to come from Moscow, that grain and other food products are getting where they need to go: to the countries most in need, predominantly in the Global South.  It’s also helped lower food prices around the world.  So it needs to keep going; it needs to be renewed.  That is urgent.

Second, we have to strengthen global food systems and help countries develop the capacity to produce their own food so that we can prevent new crises and build resilience to further shocks.  You heard President Sall say it very eloquently:  We need durable agricultural production.  We have to respond to the emergency, but we also have to set ourselves up for the long term.

Back in May, when we hosted the food ministerial, many of our African colleagues especially made clear that as much as they needed emergency relief, what they really needed was more investment in agricultural innovation, sustainability, self-sufficiency.  I am convinced from the time that I’ve spent recently in a number of countries in Africa the capacity is there, but it needs help, and we need to help.  We have heard that call.

Over the next five years, the United States will work with our Congress to invest over $11 billion worldwide toward this goal of durable agricultural production.  Last month, we aided – we added eight new African partners to Feed the Future.  This is our flagship program to broaden social safety nets, to strengthen food systems, to improve nutrition.  Many of those countries are represented here today.  Investments like these are also critical to adapting to the growing effects of the climate crisis that we’re seeing across the globe, from the droughts in the Horn of Africa to the floods in Pakistan.

Third, we need to better coordinate our efforts – and you’ve heard this, again, already this afternoon – across governments, across regional bodies, across foundations, across NGOs, across multilateral organizations, and others.  It’s true there are a multiplicity of initiatives.  We need to make sure that they are acting, working together, that all of this is coherent and all of this is coordinated.

One way that we can do that is to ensure that sanctions do not impair access to food or medicine in any country beyond just Russia and Ukraine.  And to that end, the United States intends to work with other Security Council members to ensure that food, medicine, humanitarian assistance are always carved out across UN sanctions regimes.  We’ll also expand efforts to ensure such humanitarian authorizations are included across U.S. domestic sanctions programs.  It’s something that we’re already doing, but we need to do this in a consistent way.

We can also make clear that our food security efforts are more transparent.  The United States will soon publish a report tracking our progress toward hitting the goals in the roadmap that we put out in May, from boosting assistance levels to launching new programs like the Caribbean Zero Hunger Plan, which was created with CARICOM and the Dominican Republic.  And we urge others to publish their own reports so that, again, we can better fill gaps and avoid duplication among us.

This unprecedented gathering and the leaders’ declaration that we produced is another way that we’re strengthening our cooperation.  I hope that all countries here consider it and endorse it and encourage others to do so as well.

But maybe most important, beyond what we say, is, of course, what we do – not only for the good of the people around the world bearing the brunt of this crisis, but also because the health, the stability, the wellbeing of our people depends on the food security that we build together.

With that, I would now like to turn the microphone over to our colleague, President Petro of Colombia.  Mr. President, the floor is yours.  Thank you.  (Applause.)