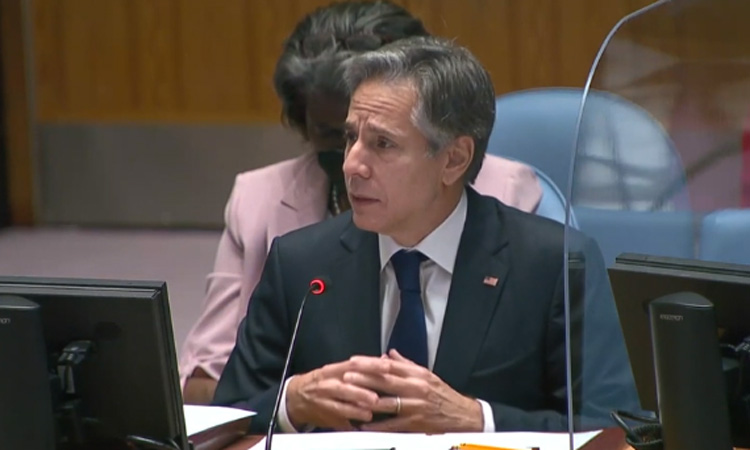 SECRETARY BLINKEN:  Thank you very much, Taoiseach.  Secretary-General Guterres, thank you for your presence, thank you for your leadership on climate.  And Taoiseach, thank you so much for convening today’s discussion, for putting the connection between climate and security on the Security Council’s agenda.  And thank you as well, together with our colleagues from Niger, for the important work that Ireland and Niger are doing with the Informal Expert Group on Climate and Security.  I also want to applaud Ms. Elman’s very powerful testimony.  We’re grateful to have it today.

From day one, President Biden has made addressing the climate crisis a top priority of our administration, including by directing me – and every one of our diplomats – to ensure it’s a core element of U.S. foreign policy.  We’re taking into account how every bilateral and multilateral engagement we have – every policy decision we make – will impact our goal of putting the world on a safer, more sustainable path.

That’s not only because of the devastating – and in some instances, irreversible – implications of climate change for our majestic planet.  It’s also because of the cascading effects on virtually every aspect of our lives, from agriculture to infrastructure, from public health to food security.  And we’ve heard some of those described already.

Right here in New York City where we’re gathered today, earlier this month, a punishing storm caused by the remnants of Hurricane Ida killed dozens of people, including a two-year-old boy, and inflicted tens of billions of dollars in damage.  More than three inches of rain fell in Central Park in a single hour, breaking a record set only a few weeks earlier.

Look at any one of our countries, you will see record-breaking extreme weather events like this.  The climate crisis isn’t coming.  It’s already here.

And clear patterns are emerging in its impact.  The consequences are falling disproportionately on vulnerable and low-income populations.  And they’re worsening conditions and human suffering in places already afflicted by conflict, high levels of violence, instability.

These mounting impacts – together with the synthesis report released last week and the comprehensive report of the Intergovernmental Panel on Climate Change released last month – underscore the urgent need to dramatically cut our emissions and build our resilience for the inevitable changes to come.

One way to do that is by helping others to do their part.  Back in April, President Biden announced that the United States would double our public international financing for developing countries most impacted by the climate crisis.  Earlier this week, here at the United Nations, he announced that we will work with the U.S. Congress to double that number again.  We urge other governments to step up in making these investments – particularly those, like the United States, that are the biggest emitters.

The Security Council also has a vital role to play – in three ways that I’d like to briefly suggest.

First, we have to stop debating whether the climate crisis belongs in the Security Council and instead ask how the Council can leverage its unique powers to tackle the negative impacts of climate on peace and security.  That’s an argument that should have been settled a long time ago.

Look at almost every place where you see threats to international peace and security today – and you’ll find that climate change is making things less peaceful, less secure, and rendering our response even more challenging.  That’s the story of Syria, Mali, Yemen, South Sudan, Ethiopia, many other places beset by strife.  By agreeing that the issue belongs here in the Security Council, we’ll also send a clear message to the international community of the serious implications that climate change has for our collective security.

Second, UN field missions should consistently incorporate the effects of climate change into their planning and implementation, as was done in the mandates for the UN Assistance Missions for Iraq, the UN Multidimensional Integrated Stabilization Mission in Mali, and the UN Office for West Africa and the Sahel, among others.  Doing that will advance mission activities; it will foster stability; it will build resilience.

Third, the UN system should further integrate climate-related analysis into its conflict mediation and conflict prevention efforts, particularly in fragile states and areas of active conflict.  The UN Department of Political and Peacebuilding Affairs decision to include climate security in its Strategic Plan for the first time in 2020 and the Climate Security Mechanism are very positive examples of just this.

To any who doubt the merits of these steps, I’d just encourage you to just ask some of the UN force commanders, the special envoys, the negotiators, the peacebuilders, others who are out there grappling with the impacts of climate in their everyday efforts.  They are hungry for more tools like these.

I’ve focused today on the threats posed by the climate crisis.  But let me just say in closing, it would be a mistake to view this only through that lens.

We agree that to prevent cataclysmic consequences, all our nations must take immediate, bold actions to build resilience, to adapt to the unavoidable impacts, and move swiftly to a net-zero world.  That is our shared charge for COP26, which is now only weeks away.  And if we’re to keep within reach the goal of limiting global warming to 1.5 degrees Celsius, every nation will need to bring their highest possible ambitions to the table.

But these efforts – and the investments they will require from all of us – also present an unprecedented opportunity to expand access to affordable, clean energy; to build green infrastructure; to create good-paying jobs – all of which could be the spur to long-term economic growth, reverse growing inequities within and between our nations, improve the lives of people around the world.

So even as we are clear-eyed about the threat, let’s not lose sight of this once-in-a-generation global opportunity.  Let’s be driven not only by the fear of all the damage the climate crisis can inflict – and already has inflicted – but also by the imagination of all the ways our response can actually make people’s lives better, now and into the future.