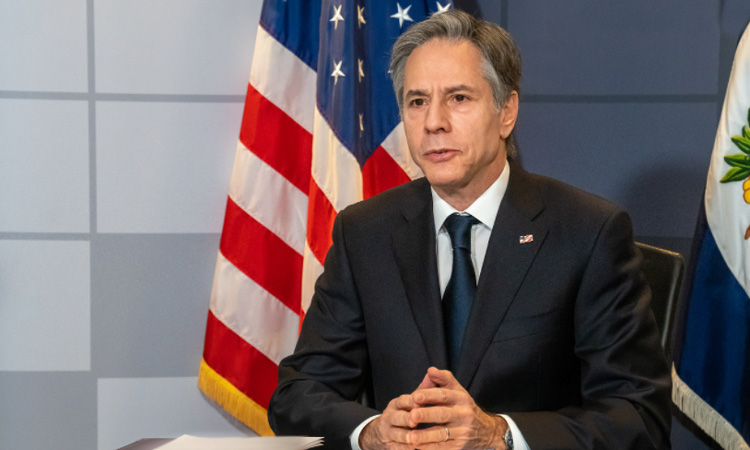 SECRETARY BLINKEN: Well, greetings, everyone, and Heiko, thank you so much for co-hosting this ministerial today, and also I just want to say to all of our colleagues thank you so much for the remarkable contributions that Germany’s made to our shared mission in Afghanistan over the last 20 years, but also over the last days, particularly the ongoing evacuation effort here at Ramstein Air Base where we’re both located.

Just before arriving here in Germany, I was in Doha; I had a chance to meet with our friend, Foreign Minister Al Thani, and the emir as well and to thank them personally for Qatar’s remarkable partnership with all of us and particularly in allowing the transit of more than 58,000 people evacuated from Afghanistan, including Americans, including our locally employed staff, including Afghans at risk, and of course including citizens from many of the countries represented here today. For the time being, like many countries here, we are managing our diplomacy with Afghanistan from Doha, and so we’re also grateful to our friends for allowing us to do that.

We thought it would be a good idea to get together today to do two things. First, to thank you for the ongoing and extraordinary cooperation in this effort. The evacuation that concluded on August 30 was, I think as everyone knows, a massively complex military, diplomatic, humanitarian undertaking. And like our efforts in Afghanistan over the previous two decades, it was a truly joint enterprise, almost in this case a global endeavor. Many of you were partners in the airlift working side-by-side with our team in Kabul at the airport. Many are now serving as transit countries. We’re helping with overland efforts. Others have agreed to resettle Afghan refugees permanently, and we hope more will do the same. Indeed, every country and institution represented here today is a partner in this ongoing effort, and we are truly grateful for that.

It’s also, I think in our judgment, the way we need to approach the way forward in Afghanistan. And so what I just wanted to do quickly today before turning it over to Heiko and then turning it over to everyone else is to just highlight three areas where our alignment and our cooperation would be especially important.

First, we must hold the Taliban, including the recently announced caretaker government and any eventual Afghan government, to their commitment to allow foreign nationals, visa holders, and Afghans to travel outside the country if they wish. The Taliban has said repeatedly that any Afghans who want to travel and have the appropriate documents will be able to do so, and more than a hundred countries have affirmed their expectation the Taliban will honor that pledge. And of course, it’s also enshrined now in a UN Security Council resolution.

We’ve heard – and I was sharing this with Heiko earlier – we’ve heard in some of our engagements with the Taliban their concern about a so-called brain drain and people with knowledge and expertise leaving the country. And one of the things that we shared with them was the best way to get people to stay in Afghanistan is to allow them to leave Afghanistan, as well as to uphold their basic rights. Whether they will take that to heart remains to be seen. But as a practical matter, a key step to enabling such a movement is resuming commercial airport operations in Kabul, and here we’re especially grateful to the governments and UN agencies working on that, and again, notably, to our friends from Qatar and also from Turkey who have been working very hard on the airport.

In the meantime, an immediate way the Taliban can demonstrate its willingness to respect freedom of movement is by allowing the departure of charter flights with properly documented passengers. I think all of you know there are a number of such flights that have been waiting in Mazar-i-Sharif. And this is a point that we’ve made crystal-clear in recent engagements with the Taliban and we encourage others to do the same.

A second point for emphasis: The Taliban’s also committed to preventing terrorist groups from using Afghanistan as a base for external operations that could threaten any of us, a pledge they have since extended not just to us but to all other countries. Here, too, we need to hold them accountable to that commitment.

Of course, we can’t just rely on the Taliban to meet these commitments. The horrific attack that ISIS-K carried out on August 26th, which killed 13 United States service members and many, many Afghans, did show the serious threat that these groups continue to play inside Afghanistan. All of us have to remain vigilant and monitor threats, especially any reemergence of externally directed plotting, and address them swiftly when they arise. As President Biden has made clear, the United States will maintain robust counterterrorism capabilities in the region to neutralize any threats, and we won’t hesitate to use those capabilities if we have to do so.

The third point is this: humanitarian aid and assistance and the need to continue to make them available to the people of Afghanistan. We’re determined to continue that lifesaving assistance in a way that’s consistent with our sanctions obligations. The ministerial that Secretary-General Guterres is convening on Monday is an opportunity for countries to step up to meet the Afghans’ urgent needs while also reminding the Taliban of its obligation to allow safe, unhindered access for humanitarian groups and to protect those groups as they’re doing their work. It’s in the interest of all of our countries to avoid a bigger humanitarian crisis in Afghanistan and the greater suffering and instability that that would produce.

As we look at how to ensure humanitarian and broader economic assistance flows directly to the benefit of the Afghan people, we believe we should be looking at and maybe building upon previous verification and distribution models and mechanisms in other countries, including those developed by the United Nations, where assistance can successfully incentivize positive actions by the government. We’re developing some concrete ideas in that direction, I think the UN is as well, and I certainly welcome any other thoughts on building in such mechanisms.

All three of these core objectives will require engagement with the Taliban, but there’s a crucial distinction between engagement, which we carried on throughout the evacuation, which we continue to pursue – a distinction between that and treating the Taliban as we do most other countries. While the Taliban badly wants or professes to want international legitimacy and support, that legitimacy and support has to be earned by their actions. And in our judgment, it cannot be earned quickly, it cannot be earned by words alone, or even by some positive first steps, welcome as those may be. It really has to be demonstrated over time.

The Taliban can earn that legitimacy gradually, over time, through a sustained pattern of action that demonstrates a genuine commitment to core expectations that are enshrined in the Security Council resolution adopted on August 30th, which include freedom of travel, not allowing Afghanistan to harbor terrorists, humanitarian access, respecting the basic rights of the Afghan people – particularly women and minorities – not carrying out reprisals, and forming an inclusive government that can meet the needs and reflect the aspirations of the Afghan people. Needless to say, the names in the caretaker government do not inspire confidence in that last regard. We’ll have to see what emerges in a more permanent government.

And I would just note parenthetically that inclusivity is not a favor that the Taliban would be doing to any of us. It is, in our judgment, a necessity if Afghan[1] is going to be stable and if it can move forward in a sustainable way, because in its absence, it only increases the likelihood that the divisions will turn back into civil war at some point.

But in any event, all of these expectations reflect what the international community expects of any government seeking international legitimacy, support, and, ultimately, recognition. We’ll continue to monitor carefully the Taliban’s actions, including when it comes to respecting freedom of assembly and the right to peaceful protest. But ultimately, to be effective – and this is really the last word I wanted to say – we must be aligned. And to advance our shared interests, our engagement with the Taliban has to be coherent, clear-eyed, circumspect, and, again, as much as possible, aligned.

With that, let me – I’m sorry for going on so long, but let me turn it over to Heiko.