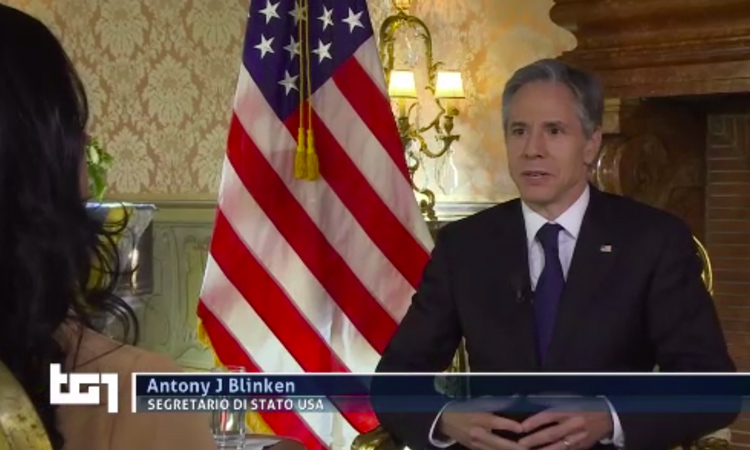 QUESTION:  Secretary Blinken, Russia is considered the mind of cyber attacks and disinformation campaigns that try to destabilize Western democracies.  What is, in your opinion, the goal of Moscow?  And what – which is the best way to fight?

SECRETARY BLINKEN:  Well, it’s hard to say what Russia’s goal is because it’s hard to put oneself in – necessarily the mind of Russian leaders.  But what I can tell you is this:  President Biden met with President Putin recently in Geneva and told him very clearly that we would like a more predictable, stable relationship.  And if we have that, I think there are areas where we can work together because it’s in our common interest.  On the other hand, if Russia chooses to engage in reckless or aggressive actions, we’ll respond, not for purposes of conflict or escalation, but because we will stand up for our interests and values.

I think what came out of the meeting are some possibilities, at least, of working more productively, for example, on strategic stability, arms control so that we get control of some of the nuclear weapons that remain in an effective way.  Also in the cyber area, we’ve had this – these recent attacks, so-called ransomware.  And we want to make sure that it’s clear that no responsible country should be in the business of harboring, giving refuge to criminal organizations engaged in these kind of attacks.  I think we had some constructive conversations and we’ll see if there are practical results that flow from it.

QUESTION:  You said we will respond.  How – what kind of response?

SECRETARY BLINKEN:  Well, I think we’ve already demonstrated in the past, President Biden has demonstrated that he will respond.  For example, we responded to the efforts to interfere in our elections, to the so-called SolarWinds cyber attack, to the attempt to poison Mr. Navalny with a chemical weapon.  There were clear and strong responses from the United States in terms of, for example, sanctions.  And many of these were done in coordination with European partners, with Canada, the United Kingdom, and others.

QUESTION:  China and U.S. seem to disagree about everything: trade tariffs, expansionism, and most of all, human rights.  Is there any common ground on your horizon?

SECRETARY BLINKEN:  The relationship with China for all of us – for Italy, for the United States, for other countries – is a very complicated one, it’s – you can’t sum it up in one word.  It has adversarial aspects, it has competitive aspects, and competition is good if it’s fair.  It has cooperative aspects, including hopefully on things like climate change.  But the common denominator that we’ve been discussing with all of our European partners, including Italy, is that whether it’s adversarial, whether it’s competitive, whether it’s cooperative, we’re much better off engaging China together than we are alone.  And I think you’ve seen that in the G7 meeting, in the NATO meeting, in the U.S.-European Union meeting, there is increasingly convergence on engaging with China together from a common position.

SECRETARY BLINKEN:  We have to start by remembering why we went to Afghanistan in the first place.  September 11th, 2001, the United States was attacked by al-Qaida, bin Laden.  Our closest allies and partners at NATO, Italy, and our other friends stood up in our defense.  They invoked Article V of NATO for the first time: an attack on one is an attack on all.  And together, we went to Afghanistan to find the people who attacked the United States on 9/11, to make sure that they could not do it again.  And we were largely successful in that effort.  Bin Laden was brought to justice 10 years ago.  Al-Qaida in Afghanistan currently does not represent a real threat to the United States, to Italy, to any of the other countries.

Meanwhile, 20 years, $1 trillion spent by the United States, and sacrifices by our partners, including Italy as well.  But also, we’re withdrawing our forces from Afghanistan, but we’re not leaving Afghanistan.  We will remain engaged diplomatically, supporting Afghanistan with economic, humanitarian, development assistance, assistance for their security forces, and doing that with our partners.

So I think it’s a fact that we were there for a reason, we succeeded in accomplishing what we set out to accomplish, and at some point Afghanistan has to find its own future with our strong support.  That’s where we are now.

QUESTION:  USA-Iran – a new beginning, or the same-old story?  I mean, how many chances are there to revive the 2015 nuclear deal?

SECRETARY BLINKEN:  Well, we’ve now had six rounds of discussions with Iran indirectly through our European partners.  We’ve narrowed a lot of the differences that existed in terms of how to get back into the nuclear agreement, but we haven’t resolved all of them.  There are some very significant differences that remain.  I can’t tell you whether we’ll succeed in overcoming those differences.  It mostly depends on decisions that are made in Tehran by the supreme leader.  If Iran is willing to do what is necessary to come back into compliance with the nuclear agreement – an agreement that was working, that was working to contain Iran’s dangerous nuclear program – we are fully prepared to do that.  But I think right now the decision is with Iran about whether it’s serious about doing that.

QUESTION:  Israel-Palestinians peace process is at stake.  President Biden reiterated that two-state solution is still on the table, is the goal —

SECRETARY BLINKEN:  It is.

QUESTION:  — or is the proposal of the United States.  Will U.S. embassy remain in Jerusalem?

SECRETARY BLINKEN:  The U.S. embassy will remain in Jerusalem.

QUESTION:  It’s not a problem?

SECRETARY BLINKEN:  It’s not.  What is a problem is that currently, the conditions that would be most conducive to being able to try to move forward on a two-state solution are simply not there.  And the immediate challenge that we have after the violence that we saw a month ago in Gaza and beyond Gaza – the most immediate challenge that we have is, first of all, the humanitarian situation in Gaza and helping people there, then helping to rebuild what needs to be rebuilt, and making sure to the best of our ability that there are no more points of friction that could lead to a renewed conflict and to try to calm the situation, as well as start to create some hope among Palestinians for the future.

We’ve now re-engaged the Palestinians.  We’ve restored assistance that had been stopped.  We’re going to have a consulate again in – that engages the Palestinians and the Palestinian Authority.  And my hope is that over time we can create a much – a more productive environment, better conditions, and then see if there is a possibility for really advancing negotiations for two states.  It does remain the best – in some ways the only – answer for a Jewish and democratic Israel and a Palestinian state.

QUESTION:  The last question is about Cuba.  A few days ago, United States voted against the UN resolution to end the Cuba embargo.  It has been the – if I remember well – 29th time —

QUESTION:  — while 184 countries voted yes.  Why Cuba is still the enemy?  I mean, the dialogue begun by Former President Obama is over forever?

SECRETARY BLINKEN:  We’re in the midst of reviewing our Cuba policy.  We’ve – President Biden’s been in office for about six months.  There have been a lot of things on our plate.  He focused immediately on revitalizing our relationships with our partners and allies, like Italy, re-engaging in multilateral institutions – rejoining the Paris Climate Agreement, re-engaging with the World Health Organization, convening a summit of leaders on climate.  And then, of course, we’ve had the G7, which has made very important progress with all of our countries working together.  On COVID, a billion vaccines for the world, working to – on climate, to prevent the financing of coal-fired plants, the biggest contributor to global emissions.  A very strong and important agenda, both bilaterally with our closest partners and multilaterally in these international organizations.

And so there’s only so much you can do in six months’ time, so one of the things that we’re looking very hard at right now is the policy toward Cuba.  It’s under review.  I can tell you that as a matter of basic principle, the – any policy we pursue would have democracy and human rights at its heart, and we would want to make sure that we’re doing whatever we can to empower the Cuban people to decide their own future.

QUESTION:  I know human rights are important also about Cuba, but you talk to Saudi Arabia, to Turkey.  Maybe dialogue is necessary to improve the condition of people, Cuban people?

SECRETARY BLINKEN:  We’ve never resisted dialogue anywhere.  The question is:  What is the overall policy?  And that’s what we’re reviewing.  We’ve done that in a number of areas.  We spent some months reviewing our policy toward North Korea, for example, and announced that policy just a few weeks ago.  We’re doing the same on Cuba.

SECRETARY BLINKEN:  Thank you.  Good to be with you.