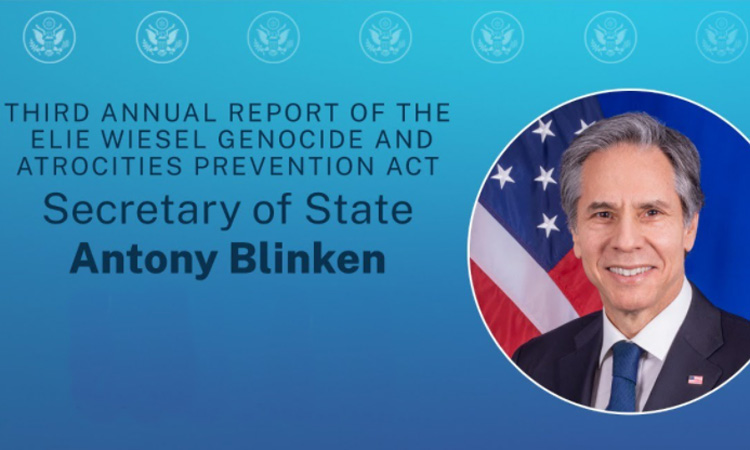 The Biden Administration is committed to promoting democratic values that underpin a stable international system critical to freedom, prosperity, and peace.  This Administration will defend and protect human rights around the world, and recognizes the prevention of atrocities is a core national security interest and a core moral responsibility.  This report highlights countries of concern and whole-of-government efforts undertaken by the Atrocity Early Warning Task Force1 to prevent and respond to atrocities from July 2020 to May 2021.

Global Assessment of Current or Past Atrocities and United States Response

The United States works in a wide range of countries at varying risk of atrocities. Given one of the strongest predictors of where atrocities are likely to occur is where they have occurred in the recent past, illustrative examples of countries that remain at particular risk include the following:

The U.S. government continues to coordinate with allies and partners to call on the military regime in Burma to return power to the democratically elected government and halt brutal killings and attacks against protestors, forced disappearances, and arbitrary detentions. Prior to the February 2021 coup, defense sales, operational training, and military education were already prohibited. Following the coup, all Department of Defense (DoD) engagements not already restricted by law were suspended. Since the President signed Executive Order (E.O.) 14014 on February 10, the Department of the Treasury (Treasury) has taken action to target the military leadership and economic revenue generators of Burma’s military regime, and the Department of Commerce has instituted export controls on Burma. The U.S. government has extended Temporary Protected Status (TPS) for people from Burma in the United States for 18 months and encouraged our partners to provide similar protection. The U.S. government has helped lead strong statements by the UN Security Council, UN Human Rights Council, and G7 condemning the coup and urging an end to violence. The coup leaders include many of those responsible for atrocities against Rohingya in northern Rakhine State in 2016 and 2017, which then-Secretary of State Tillerson concluded constituted ethnic cleansing. The Department of State designated Burma as a Country of Particular Concern in 2020 for severe violations of religious freedom. State and USAID support human rights documentation to advance accountability.

Secretary Blinken affirmed in January 2021 that the People’s Republic of China (PRC) is committing genocide and crimes against humanity against Uyghurs, who are predominantly Muslim, and members of other ethnic and religious minority groups in Xinjiang. The crimes against humanity include imprisonment, torture, enforced sterilization, and persecution. In July 2020, Treasury sanctioned two PRC government entities and six current or former government officials in connection with serious human rights abuses in Xinjiang. In March 2021, Treasury alongside the European Union, the United Kingdom, and Canada sanctioned two PRC officials in connection with serious human rights abuses. The United States in July 2020 issued the Xinjiang Supply Chain Business Advisory to highlight risks for businesses with exposure to entities engaged in human rights abuses in Xinjiang, including the use of forced labor. Then-Secretary Pompeo designated China as a Country of Particular Concern in 2020 for severe violations of religious freedom. From June 2020 to January 2021:

In March 2021, Secretary Blinken stated that acts of ethnic cleansing have taken place in Western Tigray, Ethiopia, and in May 2021, USAID Administrator Power warned of impending famine and called for immediate and urgent humanitarian access. A U.S. delegation led by Senator Chris Coons met with Prime Minister Abiy in March 2021 and expressed the urgent need to end violence and human rights violations. Since the delegation’s travel, Abiy has acknowledged the presence of Eritrean troops in Tigray and stated publicly they would withdraw. Secretary Blinken continues to urge an immediate, full withdrawal of Eritrean troops and Amhara regional security forces, cessation of hostilities, a sustainable political solution, protection of civilians, and an independent, credible investigation of atrocities, including widespread sexual violence. In April 2021, Ambassador Thomas-Greenfield issued a statement condemning reports of rape and “unspeakably cruel sexual violence” in Tigray, demanding perpetrators be brought to justice. In May 2021, Secretary Blinken announced that due to the human rights situation in Tigray, the United States is restricting certain foreign assistance to, and imposing new defense trade controls on, Ethiopia. The Secretary also approved a policy to restrict visa issuance to current and former Ethiopian and Eritrean government officials, members of the security forces, and other individuals – to include members of the Amhara regional and irregular forces and the Tigray People’s Liberation Front – believed to be responsible for or complicit in undermining resolution of the crisis, including through wrongful violence or other abuses against, or by hindering access of humanitarian assistance to, people in Tigray. The U.S. government is the largest donor to the humanitarian response. USAID and State have provided more than $305 million in humanitarian assistance in the region since the crisis began. USAID increased its assistance to the Ethiopian Human Rights Commission for investigators, strategic communications support, personal protective equipment, and training.

The U.S. government is committed to combating ISIS and the risk it poses to civilians, particularly in Iraq and Syria. State has provided nearly $9 million to the UN Investigative Team to Promote Accountability for Crimes Committed by Da’esh/ISIL. It funds organizations to collect evidence and supports the Iraqi Justice System to prosecute ISIS members. These actions respond to then-Secretary Kerry’s determination in 2016 that ISIS was responsible for genocide against groups in areas under its control in Iraq and Syria, including Yezidis, Christians, and Shia Muslims. He found that ISIS was also responsible for crimes against humanity and ethnic cleansing against these same groups and in some cases against Sunni Muslims, Kurds, and other minorities. The U.S. government is committed to accountability for atrocities committed by the Assad regime, some of which amount to war crimes and crimes against humanity. State has provided over $2.3 million to the UN International, Impartial, and Independent Mechanism for Syria, and supports the UN Commission of Inquiry and other investigations, including on chemical weapons use. Since 2020, Treasury and State have designated over 100 individuals and entities connected to the Assad regime under Syria and Syria-related sanctions authorities, including the Caesar Syria Civilian Protection Act. State programs support Syrian-led documentation, justice, and accountability efforts and the Constitutional Committee per UN Security Council Resolution 2254. USAID and State support humanitarian assistance and facilitation of safe and voluntary returns for those displaced in Iraq and Syria and first responders such as the Syrian Civil Defense. Since July 2020, Treasury and State have designated a Turkey-based money services business (MSB) and three MSB operators, among other individuals in Syria and Turkey, who facilitated funds transfers to ISIS members in Syria and Iraq.

In South Sudan, State coordinated financial and political support to establish an African Union hybrid court to investigate and prosecute perpetrators of war crimes and crimes against humanity. The government has perpetrated extrajudicial killings including ethnic-based killings of civilians, widespread sexual violence, and use of food as a weapon of war. Non-government armed groups also perpetrated unlawful killings, rape, sexual slavery, and forced recruitment of children. In February 2021, Secretary Blinken stated those responsible for human rights violations in South Sudan must be held to account. The AU Commission of Inquiry and the UN Commission on Human Rights for South Sudan have documented atrocities. State continues to support civil society documentation to further truth, justice, and accountability and advocate for a robust mandate for the Commission on Human Rights in South Sudan to collect and preserve evidence. USAID supports civil society and independent media to promote political stability, peacebuilding, and citizen’s participation in, and oversight of, peace agreement implementation.

Current U.S. Government Efforts To Prevent and Respond to Atrocities

Treasury sanctioned individuals in China, Cambodia, Gambia, Haiti, Iraq, Lebanon, Russia, South Sudan, and Yemen for their connection to serious human rights abuse and corruption under E.O. 13818, which builds upon and implements the Global Magnitsky Human Rights Accountability Act. Treasury designated four entities for exporting or supporting forced labor related to the Democratic People’s Republic of Korea into multiple countries, among other actions taken pursuant to country sanctions authorities. Treasury and State encouraged partners to adopt sanctions regimes; the European Union Global Human Rights Sanctions Regime was adopted in December 2020 to freeze the assets of, ban entry to, and prohibit dealings with human rights abusers and violators. Given the link between corruption, human rights abuses, and atrocity risks, Treasury hosted the 2nd Annual Partnership to Combat Human Rights Abuse and Corruption in December 2020. In FY 2020, the Department of Homeland Security (DHS) arrested 11 individuals for human rights-related violations, removed 30 known or suspected human rights violators, and stopped at least 15 human rights violators and war criminals from entering the United States. With support from the Human Rights Violators and War Crimes Center, DHS opened 24 new criminal investigations and is pursuing over 1,600 leads and removal cases involving suspected gross human rights violators from 95 different countries. The Department of Justice, including the Federal Bureau of Investigation (FBI) International Human Rights Unit and the Human Rights and Special Prosecutions Section, supports accountability for genocide, war crimes, use and recruitment of child soldiers, torture, and other human rights violations.

State supported accountability processes for atrocity crime allegations against nationals from the former Yugoslavia, Rwanda, Chad, Cambodia, Sierra Leone, Guatemala, Colombia, and the Central African Republic. State facilitated the voluntary surrender of Dominic Ongwen to the International Criminal Court, where he was sentenced to 25 years in May 2021 for war crimes and crimes against humanity committed in Uganda. State has supported the Kosovo Specialist Chambers, which has begun trying individuals, including former President Hashim Thaci for crimes against humanity and war crimes. State supported transitional justice processes in Colombia, including access for victims to participate. In April 2021, former FARC commanders announced they would accept the factual findings of Colombia’s Special Jurisdiction for Peace, and accept responsibility for charges of war crimes and crimes against humanity. In April 2021, President Biden recognized the Ottoman-era Armenian Genocide.

The Executive Branch has progressed on its 2020 recommendations to clarify the role of the Task Force through an interagency process, coordinated by NSC regional directorates, to produce interagency atrocity risk assessments and response plans for priority countries and to improve public messaging through external engagements. In 2021, the Executive Branch will continue to address the 2020 recommendation to define success and improve evaluation; and will: