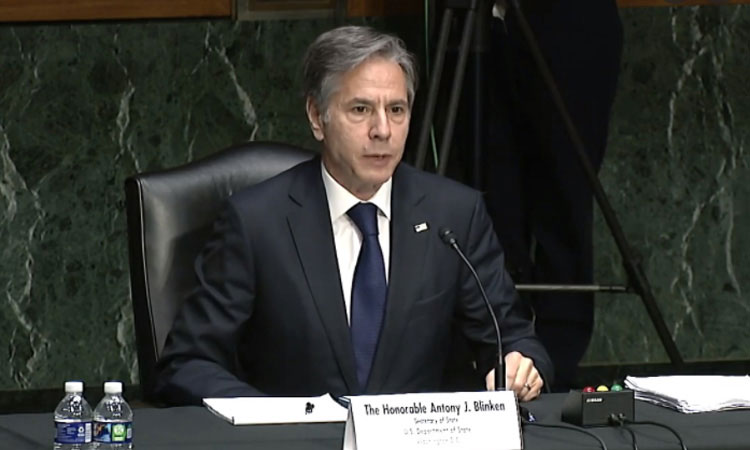 SECRETARY BLINKEN:  Mr. Chairman, Ranking Member Risch, thank you.  It’s very good to be with you, to be with every member of this committee today.  Thank you for the opportunity to speak with you about the administration’s proposed budget for the State Department.

And as both of you noted, I just returned from Kyiv with Defense Secretary Lloyd Austin, where, together, we demonstrated the United States’ commitment to the government and to the people of Ukraine.  I have to tell you the trip left an indelible impression.  We had a chance to talk about it a little bit before the hearing.

As we took the train across the border and rode westward into Ukraine, we saw mile after mile of Ukrainian countryside, territory that just a couple of months ago the Russian Government thought that it could seize in a matter of weeks – today, firmly Ukraine’s.  In Kyiv, we saw the signs of a vibrant city coming back to life: people eating outside, sitting on benches, strolling.  It was right in front of us.  The Ukrainians have won the battle for Kyiv, and for all the suffering that they’ve endured, for all the carnage that Russia’s brutal invasion continues to inflict, Ukraine was and will continue to be a free and independent country.

Moscow’s war of aggression against Ukraine has underscored the power and purpose of American diplomacy.  Our diplomacy is rallying allies and partners around the world to join us in supporting Ukraine with security, economic, humanitarian assistance; imposing massive costs on the Kremlin; strengthening our collective security and defense; addressing the war’s mounting global consequences, including the refugee and food crises that you both alluded to.

We will, we have to continue to drive that diplomacy forward, to seize what I believe are strategic opportunities, as well as address risks presented by Russia’s overreach as countries are reconsidering their policies, their priorities, their relationships.  The budget request before you predated this crisis, but fully funding it is critical in my judgment to ensuring that Russia’s war in Ukraine is a strategic failure for the Kremlin and serves as a powerful lesson to those who might consider following its path.

As we’re focused intensely on this urgent crisis, the State Department continues to carry out the missions traditionally associated with diplomacy, like responsibly managing great power competition with China, facilitating a halt to fighting in Yemen and Ethiopia, pushing back against the rising tide of authoritarianism and the threat that it poses to human rights.

We also face evolving challenges that require us to develop new capabilities, such as the emergence and re-emergence of infectious disease, an accelerating climate crisis, and of course a digital revolution that holds both enormous promise but also some peril.

Last fall, I had an opportunity to set out a modernization agenda for the department and for U.S. diplomacy to respond to these complex demands.  In no small part thanks to the FY22 budget approved by Congress, we’ve been able to make real progress on this agenda, though much remains to be done.

To give just a few examples, we have strengthened our capacity to shape the ongoing technological revolution so that it actually protects our interests, it boosts our competitiveness, it upholds our values.  With bipartisan congressional support and encouragement, we recently launched a new Bureau for Cyberspace and Digital Policy, with 60 team members to start.  And I am grateful to Congress, to this committee, for long supporting this effort, for the ideas that you shared in how best to do it.

We’re also making headway on ensuring that our diplomats reflect America’s remarkable diversity, which is one of our greatest strengths, including in our diplomacy.  We have, as the Chairman noted, our first ever chief diversity and inclusion officer, who is spearheading an effort to analyze and address the obstacles that prevent underrepresented groups from joining and advancing at State.  We’ve expanded the Pickering and Rangel fellowships and created, for the first time – thanks to the support of Congress and this committee – paid internships at State, along with strong congressional input and support for all of these efforts.

And we’re showing results.  We recently welcomed a new cohort of 179 exceptional Foreign Service professionals.  That’s putting our department on track for its largest annual intake in a decade.

My first 15 months in this job have only strengthened my own conviction that these and other reforms are not just worthwhile; they’re essential to our national security and to delivering for the people we represent.

Today’s meeting marks, by our count, the 100th time that I’ve had an opportunity to brief Congress, which is one of the ways I’ve worked to meet the commitment that I made in my confirmation before this committee to restore Congress’s role as a partner both in our foreign policymaking and in revitalizing the State Department.

Ensuring that we can deliver on the agenda will require sustained funding, some new authorities, and maybe most important of all, partnership from Congress.  That’s why I’m grateful for the chairman and ranking member’s request to establish a formal dialogue on the State Department authorization, a request that we have delivered on and we’re going to look forward to working in detail with you as the authorization process moves forward.

If we want to deepen our capability in key areas like climate, like pandemic preparedness, like multilateral diplomacy; if we want to expand on Secretary Powell’s vision of a Foreign Service training float; and equip our workforce with the training, with the tools, with the technology that we need for today’s challenges – we need some additional resources, and those are set out in the budget.

If we want to be able to swiftly stand up new missions, deploy diplomats when and where they’re needed – and I very much agree with the ranking member on this – and make those decisions based on risk management rather than on risk aversion – we need to reform the State Embassy Construction and Counterterrorism Act and the Accountability Review Board statute.  That’s laid out as well.

If we want to rapidly scale up in response to crises like refugee surges and epidemics while also avoiding costly overhead, we need more flexible domestic hiring authorities.

This is not about advancing the goals of any one administration, any one party.  It’s about refocusing our mission and purpose on the forces that really affect the lives of our fellow citizens – their livelihoods, their security – for decades to come.

So I very much appreciate this opportunity to speak today about why this matters, and look very much forward to continuing to make this committee, and Congress as a whole, a full partner in these efforts.