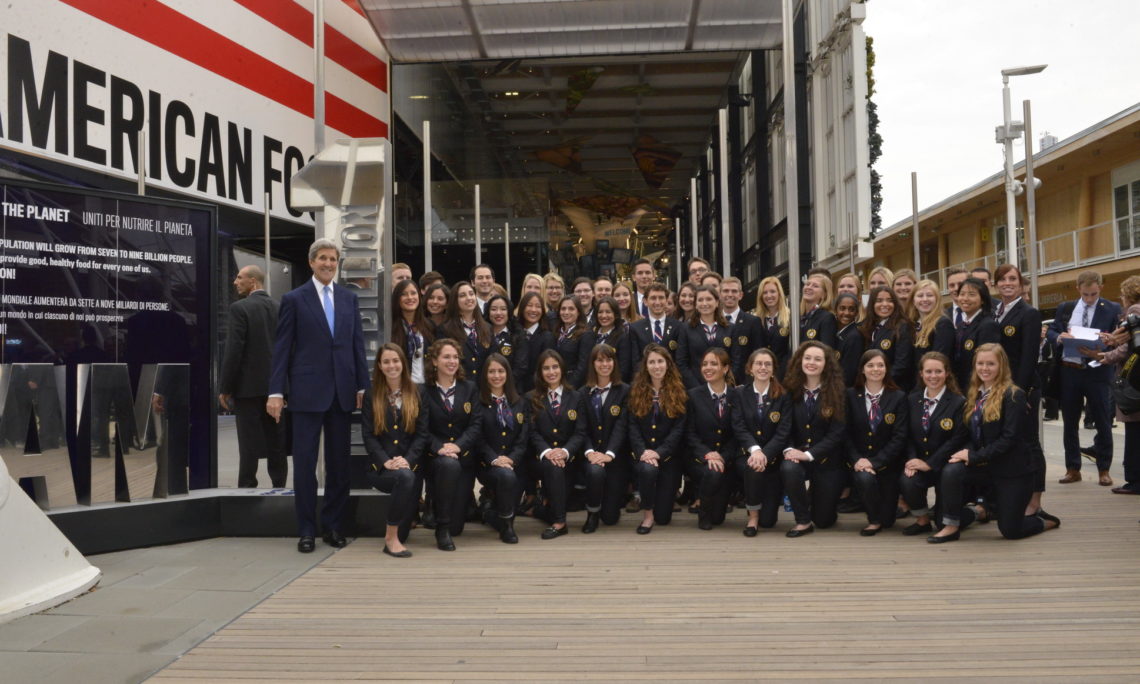 On Saturday, October 17, welcomed by EXPO CEO Giuseppe Sala and by Italian Foreign Affairs Minister Paolo Gentiloni, U.S. Secretary of State John Kerry visited Expo.  From the Expo Center, Kerry launched a clear message, inviting the whole international community to support the committment of the Obama Administration on food sustainability and climate change.  “…Food security is global security.  …and climate change is perhaps the most significant threat to global food security today…”  He then placed the themes of the Milan Exhibit within a different perspective, framing first of all its geopolitical and economic value “…We consider the nexus, the connection, between food security and climate change to be a central pillar of our foreign policy…” Kerry then explained that the United States understood how the virtuous management of environmental, agricultural and sustainable policies is a fundamental tool to reduce the risk of conflicts and of humaniatiran crises.  “Here in Europe, you’re in the middle of one of the worst refugee crises in decades. …the horrific refugee situation that we’re facing today will pale in comparison to the mass migrations that intense droughts, …, and other impacts of climate change are likely to bring about…”  he commented.

The day of Secretary Kerry at Expo continued at the Italian and USA Pavilions, where a number of Italian VIPs had convened to welcome the Guest of Honor.   Hosts of the event were Doug Hickey, Commissioner General of the US Pavilion, Amb. John Phillips, US Ambassador to Italy, and Amb. Philip Reeker, US Consul General in Milan.  Mr. Kerry’s public appearance also generated great enthusiasm among the general crowd visiting Expo, when the Secretary stopped and greeted the 60 American Students staffed at the US Pavilion to assist the myriads of visitors.

Kerry surprised everybody at Expo, with a speech that he opened in Italian. “«Vorrei cominciare congratulandomi con il Governo Italiano e gli italiani tutti per aver realizzato una stupenda Expo. E anche per aver battuto tutti i record, con una pizza lunga quasi due chilometri. Che meraviglia!» [I would like to begin congratulating the Italian Government and the Italian people for accomplishing such a wonderful project as this Expo Exhibit.  And also for having beaten all records, by cooking the longest pizza ever: almost 2 kilometers. How wonderful!  Kerry then continued in English, talking about Leonardo da Vinci as a symbolic mix of innovation, science and creativity, that is what is needed to face the environmental challenges of today.  He closed his remarks once again praising Italy “The relationship between our two countries have never been so solid.” For the full text of Secretary Kerry’s remarks, please follow the link: http://goo.gl/0qmdfz 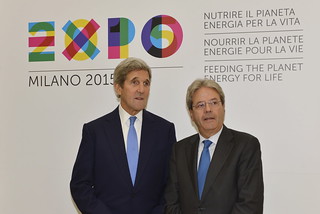