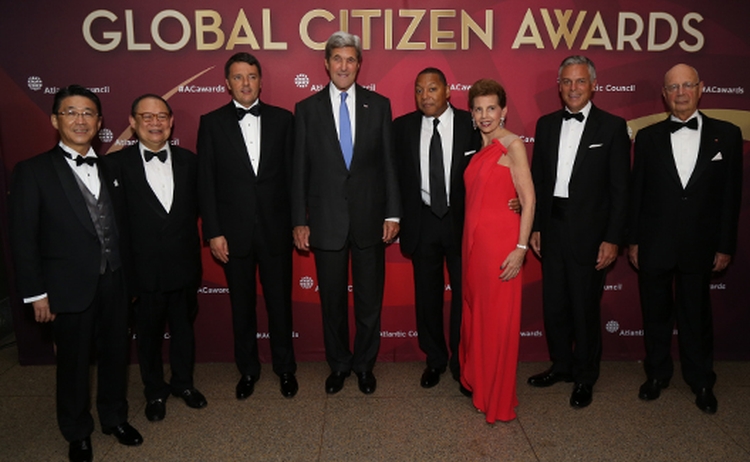 SECRETARY KERRY: Buona sera a tutti. Good evening, everybody. (Applause.) I want to thank the voice of God for my introduction and share with you, all of you, how special it is to be here tonight at this really extraordinary gathering.

Distinguished prime ministers, my colleague foreign ministers, distinguished ministers and distinguished guests all: We thank you for coming out. This is an extraordinary, impressive gathering. A lot of folks from many, many different walks of life, all with great talent, all coming to celebrate a very extraordinary group of awardees this evening.

I think it’s fair to say that no matter where we come from or what our particular callings might be, we all call ourselves Atlanticists. And I am here to honor the contributions with all of you of a dynamic and increasingly important European leader, Prime Minister Matteo Renzi. (Applause.)

It’s worth, as we do that, and putting it into the context of John Huntsman’s – John, we thank you for your tremendous stewardship here – and John’s and Fred’s comments this evening, I think it’s worth reflecting that 100 years ago this month, a generation was being sacrificed on the battlefields of the Somme and Verdun. And 75 years ago, Hitler’s army began its savage march to the east, and tens of thousands of Jews were massacred in Odessa. And 50 years ago, a wall of brick and mortar and barbed wire divided Europe as those on one side and those who were just half free.

So make no mistake: There is a reason why our predecessors built the EU and forged NATO. And there is a reason why being an Atlanticist is important. There was a reason why visionary leaders from Churchill to Roosevelt to Adenauer to De Gasperi sought to build a transatlantic community that would serve as an enduring platform for international stability, prosperity, and peace.

And we – all of us here today and particularly the honorees – are the guardians of that vision.

That is why in recent years we have stood together on behalf of a sovereign and democratic Ukraine, reaffirmed our solidarity in the face of new threats to Eastern and Central Europe, mobilized a counter-terrorist coalition that is gaining ground steadily in Iraq and Syria, and negotiated an end to the dangers posed by Iran’s nuclear program, and helped to frame a global agreement – that we must implement with urgency – to curb climate change and preserve the environmental health of our planet. (Applause.)

Matteo Renzi comes to office with a tremendous respect and understanding of all of these challenges. And he also knows that dealing with them will be the work of many hands. And so it is that he reaches out and he works to grab those hands and work with them.

But tonight, the Atlantic Council is able to recognize him as a unique and dynamic force since becoming prime minister of Italy, the youngest person ever to hold that post.

Let me be clear: This is a high-energy guy. And believe me, most people would agree that I know an Energizer bunny when I meet one. Last month – some of you may have heard – at the G20 summit in China, the guests of honor all went for a ride on a boat afterwards. We all went out on this boat around this lake. And suddenly, a very large fish came flying out of the lake and onto the vessel. Unlike his stunned colleagues, Prime Minister Renzi leapt forward, applied his old football skills and subdued the Leviathan before it had time to swallow even a single global leader. (Laughter.)

And it shows. A reformer at home – I might add a daring reformer at home – the prime minister has also become an eloquent voice on behalf of shared security and prosperity within Europe and across the Atlantic. Under his leadership, Italy has been at the forefront of defending against violent extremism, training and advising our partners in Iraq, implementing NATO’s Resolute Support Mission in Afghanistan.

Italy’s forward-looking diplomacy under Matteo has also helped to generate fresh hope in Libya, where I have been privileged to work closely with my counterpart Paolo Gentiloni, and where the Daesh terrorists have been driven back and the new government is becoming more credible by the day.

Just as dramatically, my friends, Italy has shown the way in dealing effectively and humanely with the refugee crisis. And we should remember that the movement of refugees and migrants is not just a narrative of desperation, not just people who have been forced to flee homes. It can also be the story, in many cases, of criminals, human traffickers cramming people onto overloaded boats, taking their money, and then not caring whether they live or die. And that is why Prime Minister Renzi has taken a comprehensive approach: supporting a diplomatic end to the war in Syria; addressing the economic factors that contribute to migration; and coming through when emergencies arise. Italy has helped more than 450,000 endangered migrants to reach shore safely in the past three years.

Between the United States and Italy, we all know there have always been an amazing set of ties, and there always will be; deep and abiding ties of family and friendship and history and culture; and it is cemented by shared values, invigorated by people-to-people contacts, and – yes – enlivened by delicious food and sometimes even a glass of wine.

Here in America – a country and a continent named for another son of Florence – we are delighted to see Italy being led boldly, in the right direction, and in full support of the trans-oceanic bonds long nurtured by this Atlantic Council.

So ladies and gentlemen, it is my great privilege tonight to introduce to you for this Global Citizen Award, the distinguished prime minister of Italy, Matteo Renzi. (Applause.)