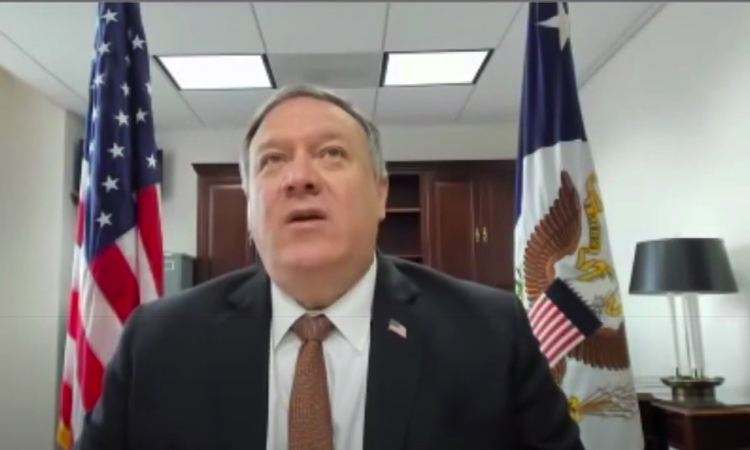 SECRETARY POMPEO:  Thank you, Foreign Minister Di Maio.  Luigi, I appreciate it.  We are praying for your country also to continue a swift and steady recovery from the coronavirus.

To the 31 representatives with us today, thank you for participating, not only this gathering, but over the past couple of months.

Finally, as I begin, I want to especially welcome Prime Minister Kadhimi and congratulate you on behalf of the entire coalition on the new government of Iraq and its peaceful transition to power.  We are all committed to your success in support of the enduring defeat of ISIS.  I look forward to deepening our partnership with the people and Government of Iraq through a series of discussions, particularly the U.S.-Iraq Strategic Dialogue, which will begin later this month.

It’s been just over a year since the territorial defeat of the caliphate.

That achievement proves the coalition’s value and underscores America’s commitment to leading its allies and partners towards shared victories.  In all of our undertakings, the Trump administration expects results.  Nearly eight million people in an area the size of the United Kingdom liberated – that’s a deliverable.

That said, our fight against ISIS continues and it will be here for the foreseeable future.  We cannot rest.

We must continue to root out ISIS cells and networks and provide stabilization assistance to liberated areas in Iraq and Syria.

We all know this:  ISIS sees no order to its terrors.  Just last month, they carried out a maternity ward massacre in Afghanistan, choosing to target the hospital’s most vulnerable, laboring mothers and their newborns.  It was a classic ISIS methodology.  We’ve seen similar attacks in West Africa and elsewhere.

So each of us needs to keep fighting, all of us together.

The U.S. is leading the investment in our shared mission by continuing its role as the military backbone of the D-ISIS effort, and we’re sharing the financial burden of Iraq’s immediate recovery.  Just last year, the United States pledged 100 million for the coalition’s main stabilization program for liberated areas.

It’s true that the pandemic is putting enormous pressure on all of our budgets, but we urge your nations to pledge to our goal of more than $700 million for 2020.

Those funds will support our work with local partners to pursue ISIS cells and networks in Syria and Iraq.

Also in the coming year, we are counting on this coalition to fund the secure and humane detention of the thousands of foreign terrorist fighters still in custody inside of Syria and in Iraq. All nations should follow Italy’s example on repatriation and Germany’s example on holding ISIS fighters and facilitators accountable.

Lastly, the United States looks forward to rescheduling our event to help bring a coordinated fight to ISIS in West Africa.

Thank you all so much for your contribution to our common goal.  May our tremendous success so far encourage all of us to keep pushing forward to a final and enduring defeat of ISIS.