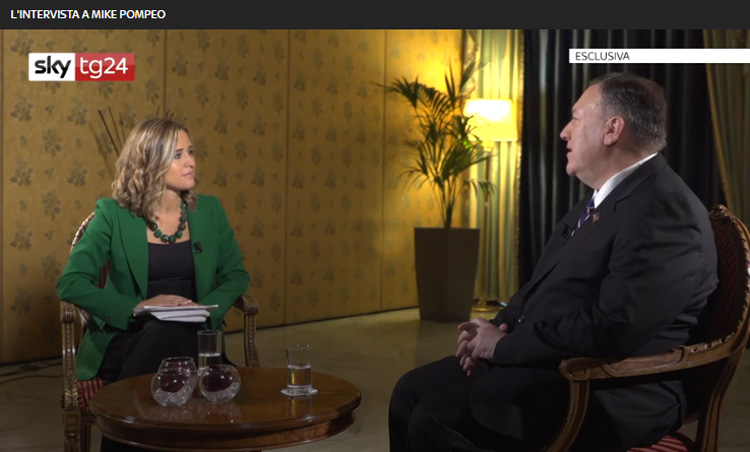 QUESTION:  So, Secretary Pompeo, let’s talk about breaking news.  The WTO just agreed that U.S. were harmed by the European policy and loan on Airbus.  Of course, now you can impose new tariffs for 7.5 billion U.S. dollars.  So that was one of the argument that you were discussing about – one of the issues you were discussing about with Italian authorities in this case.  I would like to know if, among the goods, that it’s possible there will be a tariff on – if you think to put also wine and cheese?

SECRETARY POMPEO:  Yeah, so I’ve seen that decision.  Frankly, it’s what we had expected.  We – our view has been all along for a long time now that these subsidies were illegal.  We’re working with your government and we’re working with the EU government to try and find the right mix of the way to respond to the decision that the WTO made today.  It’s a serious matter.  These are serious subsidies that were found to be in violation of the WTO, and we will – we will in short order begin to work to develop what our response will be.  And it’s certainly the case that some of the goods that you described there could be on the tariff list.  It’s possible.

QUESTION:  Talking about trade, we move to China.  Of course today you were very clear, also in your statement and during the press conference, warning Italy about the, let’s say, predatory approach that China can have sometimes.  And I interviewed personally Prime Minister Conte just one week ago, and he said to me that even though it will be vigilant, he cannot actually forbid for a private company to enter into the Italian market.  So my question to you is:  If Huawei is going to be part of the Italian 5G, is it possible that it’s going to be an issue in the future for the coalition, for the intelligence coalition between the U.S. and Italy, or not?

SECRETARY POMPEO:  So the way our national security apparatus resolves these issues is really very straightforward.  Anytime we take American information, information for which we’re responsible, whether that’s our national security information or even when we’re trying to ensure that our citizens have the right privacy protection for their information, we always want to make sure that the networks through which that information is transiting are trusted, that we know what’s there, we know where the information can go, and we – whatever risk – whatever risk exists we’re aware of so we have a good handle on it.  They have to be trusted networks.

And so to the extent that an Italian company makes a decision to invest in or provide equipment that has a network that our national security teams – our intelligence teams, our Department of Defense – conclude isn’t a trusted network, where we have risk to our information that we can’t figure our way through, we’ll have to make some very difficult decisions.  We want to be a partner with Italy in all of these things, but it is not the case that we will sacrifice America’s national security to put our information in a place where there’s risk that adversaries or the Chinese Communist Party might have access to that.

QUESTION:  Talking about another issue that maybe Italy and U.S. can disagree on, even Europe and the U.S. can disagree on, is Brexit, in the sense that President Trump was very supportive, of course, to Boris Johnson’s position.  Aren’t you afraid, as the United States, that Brexit could actually undermine not just the British economy but the European economy and maybe global economy as a whole?

As we’ve said all along, that’s for the people of the United Kingdom to resolve.  We are prepared to do everything we can to make sure that the negative ramifications that you just described don’t happen.  We want the European economies to continue to grow.  We’ve talked to the United Kingdom about a free trade agreement in the event that Brexit takes place, and we’re happy to engage with every country in the region.  We want – we want growth all across the world.

And so there’s certainly some risk that if Brexit proceeds there would be that, but I’m confident that entrepreneurial spirit and innovation all across Europe and the United States will continue to permit everyone’s economy to continue to grow.

QUESTION:  A very important part of your visit to Italy is also your meeting with the Holy Father Pope Francis.  Can I ask you what you expect from this meeting, also considering that Pope Francis in the past has been very vocal sometimes, he’s – especially immigration policy in the U.S.  Just to quote him, he says several times importance is to build bridges, not walls.  So what do you expect from this meeting?

SECRETARY POMPEO:  Yeah, I’m really looking forward to it and I’m honored that he would grant me this opportunity to spend some time with him, and I’m very much looking forward to that.  There’s lots of places that the Holy See and the United States work together on.  I’ve worked with Archbishop Gallagher and I’ve worked with Cardinal Parolin on humanitarian challenges all across the globe, and the Holy See is a great partner.

On migration, there are differences in views.  There’s differences in views even within the United States.  Our view, however, is that the Holy See and the United States both agree that if we can develop institutions, if we can develop economies, if we can make places thrive and grow, then the need to migrate will be mitigated.  The rationale – so many times people are in such difficult situations in places across the world that they feel like fleeing their home country is the only answer.  And we know – we know those journeys are perilous, we know they are fraught with danger.  We see it in our own country, where citizens of El Salvador and Guatemala and Honduras transit Mexico, young women trafficked, raped, abused.  It’s a dangerous journey across Mexico into the United States.  A much better solution is to try and create the conditions on the ground in those countries where those people can thrive.

We feel the same way about migration all across the world.  The best solution to these migration challenges is to create safety, security, and prosperity in the home countries of these people.  It’s where they, frankly, want to be themselves.

QUESTION:  Talking about migration, even you, you have Italian origin – I know that you are very proud of it.  You’re going to go in Abruzzo in the next hours to see the land of your ancestors.  So I just would like to know, in your policy, in your life, what does that mean to you to be Italian, have Italian origins?  He has – it has a role for you or not?

SECRETARY POMPEO:  It’s been something I’ve had great pride in.  My Italian heritage on my father’s side is something that my father often talked about.  He has a great recipe for meatballs and we enjoy doing that kind of thing together, talking about Italy and the like and Italian cooking.  It’s something that my father has enjoyed as well.  He’s now almost 90 years old.  And I’m going to get this great chance to go to the beautiful town of Pacentro and I’ll walk around and see the place where my forefathers were from.

QUESTION:  Thank you.  I have a very last question because (inaudible) also the situation during the press conference today – and it was, of course, about Ukraine – but just because you were very clear today in saying that you won’t let anyone intimidate the State Department or bully the State Department.  Also, President Trump was very clear today.  He said that he thinks it is not an impeachment, it is a coup.  Do you agree with the President on that?

SECRETARY POMPEO:  We have, at the State Department, a very clear obligation to try and cooperate with our parliamentary, our congressional colleagues.  I will do that.  The State Department will do that.  We – I’ve watched, I’ve seen the United States policy on Ukraine.  We’ve been very clear about this.  President Trump has been clear since the very beginning.  We’ve wanted only the best things for the people of Ukraine, and that’s what – that’s what President Trump was trying to do.  It was what he was trying to do for the entire time I’ve known him, including that phone call.

QUESTION:  Thank you very much.  That was very kind of you.

SECRETARY POMPEO:  Thank you very much.