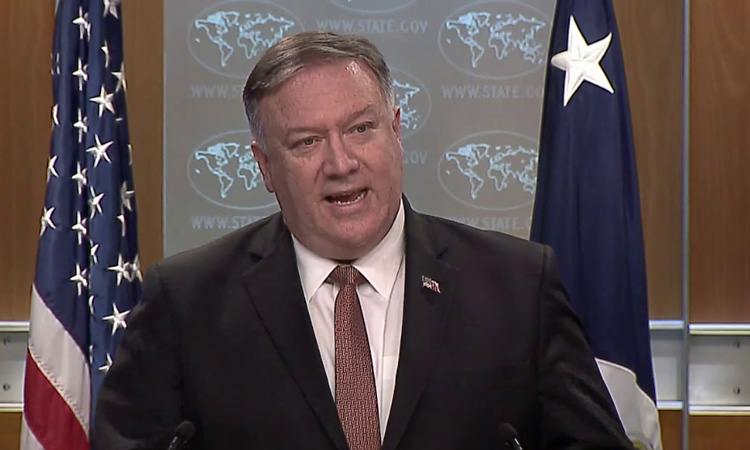 SECRETARY POMPEO: Good morning. I’m here to make an important foreign policy announcement concerning the Islamic Republic of Iran. Today the United States is continuing to build its maximum pressure campaign against the Iranian regime. I am announcing our intent to designate the Islamic Revolutionary Guard Corps, including its Qods Force, as a foreign terrorist organization in accordance with Section 219 of the Immigration and Nationality Act. This designation will take effect one week from today.

This is the first time that the United States has designated a part of another government as an FTO. We’re doing because the Iranian regime’s use of terrorism as a tool of statecraft makes it fundamentally different from any other government. This historic step will deprive the world’s leading state sponsor of terror the financial means to spread misery and death around the world.

Businesses and banks around the world now have a clear duty to ensure that companies with which they conduct financial transactions are not connected to the IRGC in any material way. It also gives the U.S. Government additional tools to counter Iranian-backed terrorism.

This designation is a direct response to an outlaw regime and surprise no one, and it builds on the more than 970 Iranian individuals and entities that the Trump administration has already sanctioned.

For 40 years, the Islamic Republic’s Revolutionary Guard Corps has actively engaged in terrorism and created, supported, and directed other terrorist groups. The IRGC masquerades as a legitimate military organization, but none of us should be fooled. It regularly violates the laws of armed conflict; it plans, organizes, and executes terror campaigns all around the world. From the moment it was founded, the IRGC’s mandate was to defend and export the regime’s revolution by whatever means possible. The IRGC institutionalized terrorism shortly after its inception, directing horrific attacks against the Marine barracks in Beirut in 1983 and the U.S. embassy annex in 1984 alongside the terror group it midwifed, Lebanese Hizballah. Its operatives have worked to destabilize the Middle East from Iraq to Lebanon to Syria and to Yemen.

With this designation, the Trump administration is simply recognizing a basic reality. The IRGC will take its rightful place on the same list as terror groups its supports: Lebanese Hizballah, Palestinian Islamic Jihad, Hamas, Kata’ib Hizballah, among others, all of which are already designated as foreign terrorist organizations.

The long list of IRGC backed terrorist incidences is ample justification for today’s decision. I want to just give you a handful of examples.

Last September a federal court in the United States found Iran and the IRGC responsible for the 1996 Khobar Towers bombing which killed 19 American service members. In 2011 the United States foiled an IRGC Qods Force plot right here in Washington, D.C. to bomb a restaurant. The attempt was to kill the Saudi ambassador to the United States of America.

Outside of the United States, the IRGC’s terror campaign is just as active. In 2012 four Qods Force operatives were apprehended after plotting to attack Israeli targets in Turkey. In that same year, two other Qods Force operatives were arrested in Kenya for planning a bomb attack while the Qods Force also directed a bomb attack that targeted Israeli diplomats. And as recently as January 2018, German authorities uncovered 10 suspected Qods Force operatives active in their country. The IRGC supports Palestinian terror groups that target innocent civilians, and it helped create U.S. designated terror groups both in Lebanon and in Iran. And the IRGC also backs the murderous Assad regime which gasses and slaughters its own people.

Our designation makes clear to the world that Iranian regime not only supports terrorist groups, but engages in terrorism itself. This designation also brings unprecedented pressure on figures who lead the regime’s terror campaign, individuals like Qasem Soleimani. He is the commander of the Qods Force and oversees Iran’s forces deployed to advance the Islamic Revolution through terrorism and other forms of violence. He doles out the regime’s profits to terrorist groups across the region and around the world.

The blood of the 603 American soldiers the Iranian regime has found to have killed in Iraq is on his hands and on the hands of the IRGC more broadly. Inexplicably the regime has faced no accountability from the international community for those deaths. Far from being an arbitrary attack on Iran, our pressure campaign imposes just and long overdue consequences for the regime’s malign activity.

We should not also forget the IRGC’s central role in the nationwide con artistry and corruption of the regime’s leaders which they perpetrate against the regime’s own people. Other governments and the private sector will now see more clearly how deeply the IRGC has enmeshed itself in the Iranian economy through both licit and illicit means.

In just this past July, the city council of Tehran announced that the IRGC Cooperative Foundation, which manages the IRGC’s investments, has embezzled more than $1 billion from the city of Tehran. The next month, a former councilmember accused the long-time mayor of Tehran of steering contracts to the IRGC. It’s no coincidence that the mayor also formerly served as an IRGC commander and the chief of Iran’s police state. Back in 2017, Tehran arrested several IRGC commanders involved with the Cooperative Fund for corruption, including the IRGC’s financial architect, Masoud Mehrdadi.

Then there’s Mahmoud Ahmedinejad’s old college pal, Sadeq Mahsouli. They call him “the billionaire general.” He went from being a low-level IRGC officer to one of Iran’s richest men, all thanks to scoring construction and oil contracts from companies linked to the IRGC.

The leaders of Iran are racketeers, not revolutionaries. The Iranian people deserve better than to be governed by this cadre of hypocritical and corrupt officials. They are opportunists.

And on a final note, the IRGC is also responsible for wrongly detaining U.S. persons, several of whom remain in captivity in Iran. The American people should know that we are working diligently to bring each of those individuals home.

With this designation, we are sending a clear signal, a clear message to Iran’s leaders, including Qasem Soleimani and his band of thugs, that the United States is bringing all pressure to bear to stop the regime’s outlaw behavior. We ask that our allies and partners around the world do the same. Thank you.

MR PALLADINO: The Secretary has time for one or two questions, and we’ll have an additional opportunity with some others. Al Hurra, Michel Ghandour.

QUESTION: Thank you so much, Mr. Secretary. Javad Zarif has said today that there will be consequences for U.S. forces in the region after the designation, and he addressed President Trump, saying that he should know better than to be thrown into another U.S. disaster. What’s your answer? And secondly, news reports say that the U.S. is considering sanctions on the Lebanese, the head of the parliament of the Lebanese speaker, Nabih Berri, because of his ties with Hizballah and Iran. Can you confirm that?

SECRETARY POMPEO: So to your second question, on my most recent trip to Beirut, made clear to the Lebanese leadership, including in conversations with Speaker Berri, that America was not going to tolerate the continued rise of Hizballah inside of the country, that it wasn’t in the best interest of the Lebanese people to have a armed terror group underwritten by the very Iran that we’re speaking about today, continue to have significant sway inside of that nation by use of force. This isn’t about political parties; this is about armed forces inside the country of Lebanon. We made very clear that we were going to continue to evaluate sanctions for all those that were connected to the risk that was created to the Lebanese people.

As for the first question, I’ve seen Foreign Minister Zarif make many statements before. We have made clear both publicly and privately that an attack on the United States of America is something that they ought to think more than twice about.

QUESTION: Mr. Secretary, I asked you this question two weeks ago and you didn’t seem to be sure about it. Now that you have list them, I’m wondering what was changed. Now you have list them as a terrorist organization. Will you treat them like ISIS and al-Qaida? In other words, will you target Qasem Soleimani like you target Abu Bakr al-Baghdadi? And on a separate note, Prime Minister Netanyahu said that he wants to annex part of the West Bank today. What’s your reaction to that? Will that undermine the peace plan?

SECRETARY POMPEO: Yeah, I don’t have comments on either one of – a response to either one of those questions. I’ll leave – when you say “target,” you’re usually talking about things that the Department of Defense does. I’ll allow them to respond to that question.

QUESTION: Thanks. Hello, Mr. Secretary, how are you?

QUESTION: Two quick ones. How will this affect EU trade, oil waivers, since the IRGC’s involved in most parts of the Iranian economy – so the question – including banking and everything else? So how does this affect those relations?

SECRETARY POMPEO: So I think what we’ve said before is we want Iran to behave like a normal nation. We hit on 12 things that they needed to do back in what would have been almost a year ago, May of last year. That’s the mission; that’s the mission of this designation as well. So that’s our purpose. If you said “what’s the intent,” it’s to achieve the outcomes that we laid out back in May of last year to get the Islamic Republic of Iran to do the simple thing like not launch missiles into Saudi Arabia, risking American lives each and every day.

What was your – remind me of your first question.

QUESTION: And then the first one is: How does this affect things on EU trade —

SECRETARY POMPEO: So, yeah. So here’s the simple answer to that. If you’re the general counsel for a European financial institution today, there is more risk. It is absolutely the case that the IRGC amounts to a significant piece of the Iranian economy through pure kleptocracy. And it is also the case that it is sometimes difficult to know whether the IRGC is involved. That is, the diligence effort is an enormous undertaking. I think this – I think this will require more diligence be done by every business that is considering doing things that are even now second and third orders removed from what you might think of as a traditional connection to the Iranian economy. This extends – to your point about trade – oh, you asked about oil waivers. We’ll make that decision in due course as we move towards May 2nd, but it – this absolutely extends the – and creates clarity around those transactions that create risk for companies not just in Europe, but frankly all over the world.

QUESTION: Was that one of your goals, Mr. Secretary, to shut down EU business?

SECRETARY POMPEO: Thank you. Thank you all very much.

MR PALLADINO: Thank you all very much.