Home Homepage | News & Events | Secretary Tillerson: United States Will Stand Up to Those Who Commit Crimes Against ‘Innocents’ 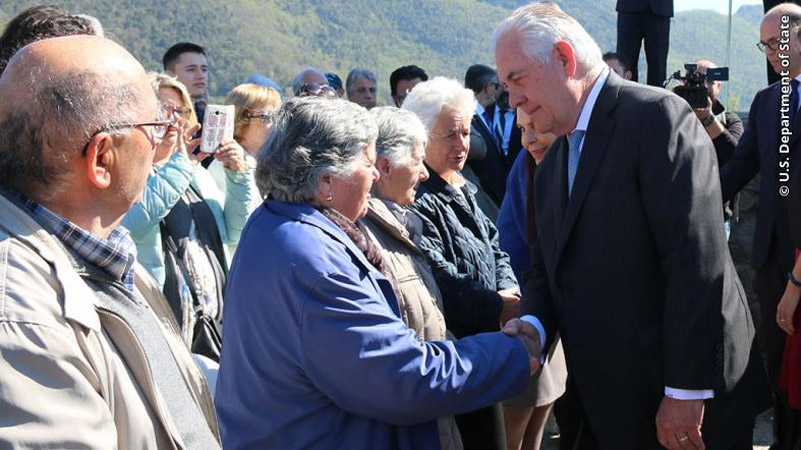 Today, U.S. Secretary of State Rex Tillerson attended a ceremony at the Sant’Anna di Stazzema memorial in Italy, which is dedicated to the victims of the massacre committed in the village by the Nazis in 1944 during World War II.

At the wreath laying ceremony at Sant’Anna Secretary Tillerson stated, “We remember the events of August 12th, 1944 that occurred in Sant’Anna and we re-dedicate ourselves to holding to account any and all who commit crimes against the innocents anywhere in the world. This place will serve as an inspiration to us all.”

Secretary Tillerson attended the ceremony during his trip for the G-7 Foreign Ministers’ Meeting this week. The G-7 Foreign Ministers’ Meeting provides a venue for the foreign ministers of Canada, France, Germany, Italy, Japan, the United Kingdom, and the United States to discuss global political and security issues of mutual concern. These discussions will set the stage for the G-7 Leaders’ Summit President Trump will attend in Taormina, Italy in May 2017. On the margin of the G-7 events,  Secretary Tillerson also had several bilateral meetings with his diplomatic counterparts including  Japanese Foreign Minister Fumio Kishida, French Foreign Minister Jean-Marc Ayrault, and British Foreign Secretary Boris Johnson.

Following his visit to Italy, Secretary Tilerson will travel to Moscow, Russia, on April 12, where he will meet with Russian Foreign Minister Sergey Lavrov and other Russian officials. During his visit to Russia Secretary Tillerson will discuss Ukraine, counterterrorism efforts, and bilateral relations Democratic People’s Republic of Korea and Syria. This trip is part of our effort to maintain direct lines of communication with senior Russian officials and to ensure the United States’ views are clearly conveyed, including on next steps in Minsk implementation.

Secretary Tillerson at the WW2 Memorial in Italy